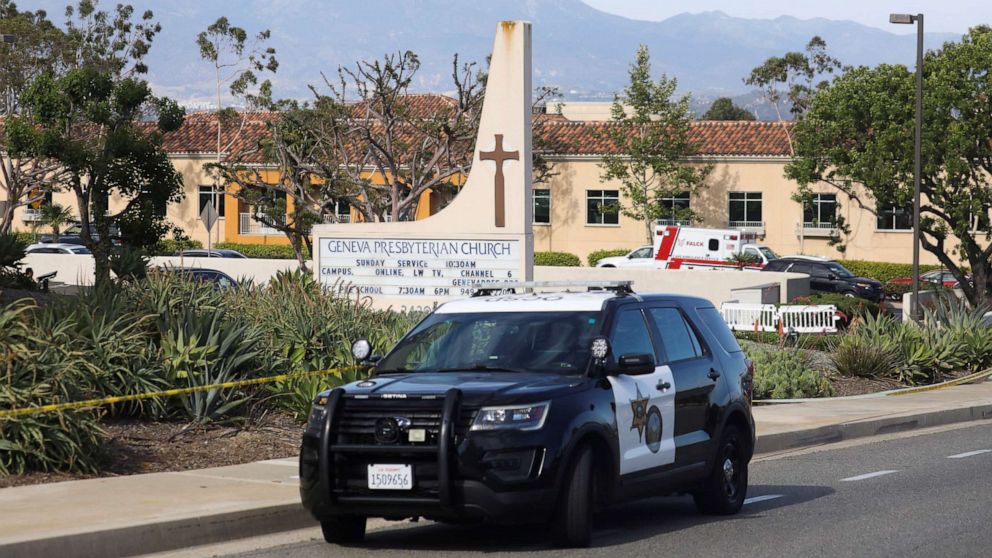 The deadly shooting at a church in Laguna Woods, California, on Sunday, was motivated by the political tension between China and Taiwan, authorities said Monday.

One person was killed and five were wounded, four critically, in the shooting inside the Geneva Presbyterian Church, the Orange County Sheriff's Office.

All victims are adults and range in age from 66 to 92 years old, the sheriff's office said.

A group of churchgoers detained the suspect and hogtied his legs with an extension cord and confiscated two handguns from him before more people could be shot, according to Jeff Hallock, Undersheriff at the Orange County Sheriff's Office.

"That group of churchgoers displayed what we believed exceptional heroism, heroism and bravery in interfering or intervening to stop the suspect," Hallock said.

The suspect was identified Monday in Orange County jail records as 68-year-old Las Vegas resident David Chou. He is expected to be charged with one count of murder and five counts of attempted murder and is being held on $1 million bail, jail records show.

The suspect secured the doors and tried to super glue the locks so victims could not leave, Orange County Sheriff Don Barnes said Monday. Law enforcement found more ammunition and Molotov cocktails placed around the church.

The FBI has opened a federal hate crimes investigation into the shooting.

Chou is Chinese but an American citizen, officials said. He lived alone in Las Vegas and has a wife and child who are not living in the U.S.

Authorities believe Chou's anger began when he lived in Taiwan, where he felt he was an outsider, and his anti-Taiwan views were not accepted, Barnes said.

Chou's wife and son still live in Taiwan, but Chou has lived alone in the U.S. for many years, Barnes said, adding that Chou's views have become more radical as tensions between China and Taiwan have escalated.

Investigators found writings in Chou's car that described his hatred for Taiwan, Barnes said, adding that they were not a manifesto, but rather "notes." Authorities hypothesize that Chou may have targeted the Orange County church because it was the closest, Barnes said.

The shooting occurred during a lunch banquet being held at the church, which caters to the Taiwanese population in Southern California.

"The Presbytery of Los Ranchos is deeply saddened by a fatal shooting that occurred at a lunch reception honoring a former pastor of the Taiwanese congregation that nests at Geneva Presbyterian Church in Laguna Woods," Tom Cramer, Presbytery head of staff, said in a statement Sunday. "Please keep the leadership of the Taiwanese congregation and Geneva in your prayers as they care for those traumatized by this shooting."

China has long held that Taiwan is part of its country, while Taiwan governs itself as an independent nation dating back to when Chinese Nationalist leader Chiang Kai-shek fled the mainland as the Chinese Communist Party came to power in 1949.

The shooting was reported at about 1:26 p.m. local time, authorities said.

There were 30 to 40 people inside the church when the shooting began, officials said.

Dr. John Cheng, 52, a prominent doctor in the area, was identified as the only person killed in the attack. He is being called a hero for saving lives. He charged the suspect and tried to disarm him allowing others to jump in, Barnes said. During the process, Cheng was shot and killed. Without his actions, the sheriff and FBI believes there would have been more people shot.

The two handguns found at the scene were legally purchased by Chou in Las Vegas, investigators said.