WTVD
North Carolina marks an historic anniversary today-- it's been one year since the first same-sex marriage was performed in the state.

On October 10, 2014, Wake was one of the few counties where the Register of Deeds office remained open when the same-sex marriage ban was overturned. Staff worked well into the night marrying couples that had been waiting for days.

It was a monumental moment seen by thousands across our state and beyond. The first wedding had some people celebrating and other seething.

Laura Riddick with the Wake County Register of Deeds said staff are currently issuing 3-5 same-sex marriage licenses every single weekday. She explained the overall number of marriage licenses issued has risen 10 percent. Of the 7,240 licenses handed out since the ruling, 670 were given to same-sex couples.

Chad Biggs was the first to exchange vows in Wake. Right after a federal judge ruled, Biggs and his partner immediately filed for a license and were married minutes later live on ABC11.

"It did stun me on Friday, that evening, that it did pass and it caught us off guard," said Biggs.

In this May 8, 2012 photo a man stands in front of election results in Raleigh for the passage of a constitutional amendment defining marriage as solely between a man and woman.

Reverend Patrick Wooden of the Upper Room Church of God in Christ in Raleigh has been a strong voice of opposition to same-sex marriage and not much has changed. He told ABC11 Wednesday that in the last year a handful of same-sex couples have inquired if they could be married in his church. He shot down each and every request

"There's no chance that I would ever perform a same-sex marriage," said Wooden. "All people are welcome to come to the church, but we're not going to change our Christianity."

Biggs said he respects the minister's position, but is working to make sure same-sex couples can still have the wedding of their dreams, even if it's not inside a place of worship. Biggs runs an event planning company now and about a third of his business is same-sex couples.

"When it comes to people wanting to get married and finding locations to get married, there are tons of places out here we can celebrate same-sex marriages and traditional marriages," said Biggs. "I'm just happy to celebrate love."

Andrea Goetschius, 32, of Durham, N.C., holds a sign while attending a rally against a state constitutional amendment recognizing marriage between a man and a woman.

Back in June, a measure allowing some court officials to refuse to perform gay marriage responsibilities because of their religious beliefs became law in North Carolina, with the state House voting to override the governor's veto of the bill.

The law means some register of deeds workers who assemble licenses and magistrates to solemnize civil marriages can decide to stop performing all marriages if they hold a "sincerely held religious objection."

The law goes on to say court officials who disclose a "sincerely held religious objection" must stop performing marriage duties for both gay and heterosexual couples for at least six months. The chief District Court judge or the county register of deeds - both elected officials - would fill in on marriages if needed. 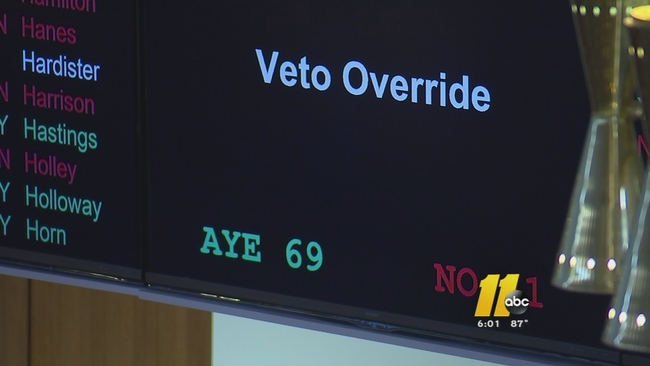