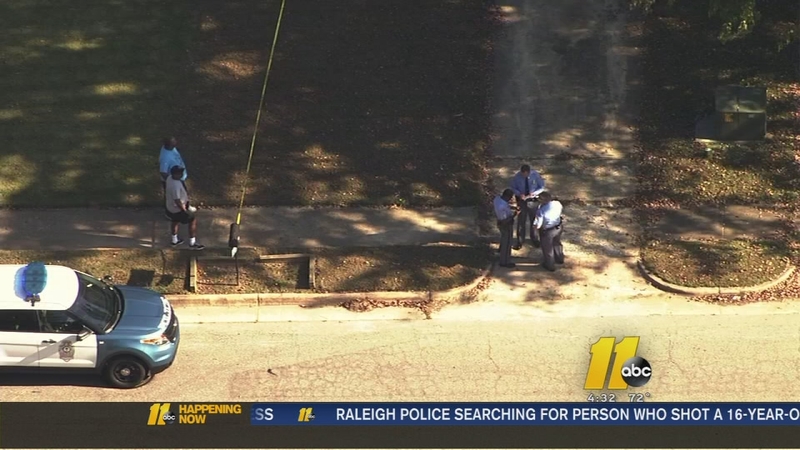 RALEIGH (WTVD) -- A woman who lives along Idlewood Village Drive in Southwest Raleigh said she was startled Wednesday afternoon to hear gunshots going off outside her window.

The woman, who did not want to be identified, told ABC11 she heard six or more shots being fired. Minutes later, she heard a teen moaning in her front yard and calling out for help.

"I jumped out of the bed. I didn't come to the door to see who was shooting. I wasn't going to open the door if somebody is shooting," she said. "I cracked my door right here and heard somebody moaning, moaning on the side. I didn't see him, but I heard the moaning. My neighbor was standing there doing what he was doing, trying to save this fellow."

The Raleigh Police Department said 16-year-old Noah Dunn was hit in the torso and buttocks by bullets in the incident just before 3:30 p.m. in the 3200 block of Idlewood Village Drive.

Residents said investigators collected a number of shell castings from the ground.

Some residents in the usually quiet neighborhood where mostly senior citizens live, said they were concerned they could have been caught in the gunfire.

"You never know. I could have been cutting my grass. A bullet don't have no steering wheel on it, no more than the person behind, and I could have got wiped," said resident Donal Lassiter.

A couple of homes in the neighborhood have surveillance cameras. One homeowner said she is working with police.

No arrests have been made. Police said the gunmen drove off in a car after the shooting.

Anyone with information that might assist the investigation of the case is asked to call Raleigh CrimeStoppers at (919) 834-HELP or visit raleighcrimestoppers.org for text and email reporting options. CrimeStoppers pays cash rewards for anonymous tips that help solve cases.