Sources: Spellings not the only candidate for UNC president

WTVD
By Ed Crump and The Associated Press 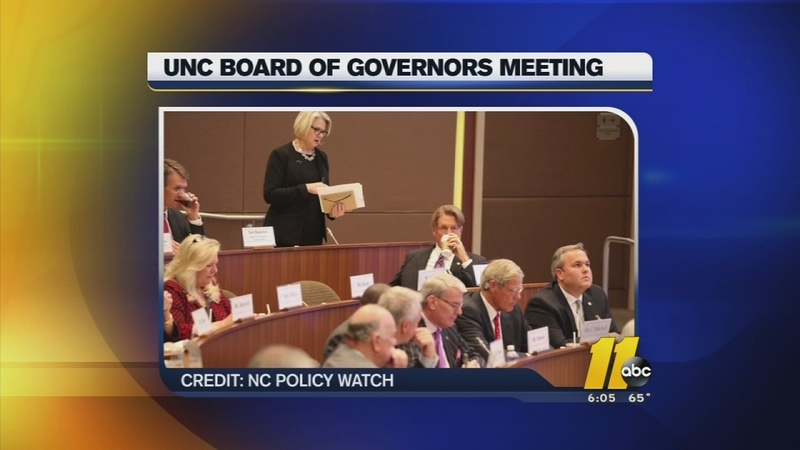 CHAPEL HILL, N.C. (WTVD) -- The University of North Carolina's governing board met Friday to discuss the search for the next president of the 17-campus system despite complaints the process is being rushed and calls by colleagues of the board's chairman for him to step aside.

The meeting wrapped up just before 6 p.m., but no candidate was announced.

The UNC Board of Governors went into closed session, citing exceptions within the state open meeting laws, to hear a report from the board "search committee and candidate review," according to the posted tentative agenda.

The meeting went ahead even after House Speaker Tim Moore, R-Cleveland, and Senate leader Phil Berger, R-Rockingham, wrote to board members Thursday. The two cautioned the 32-member voting board against acting contrary to a bill on Gov. Pat McCrory's desk that would require the board to consider at least three final candidates.

But Spellings is not the only finalist for the job of President of the UNC System. That's according to members of the UNC Board of Governors who have spoken with ABC 11 but want to remain anonymous.

One said the gathering was "civil and productive."

They were presented not only with a chance to meet Spellings in person but the consultant hired to assist in the search also presented board members with the resumes of four other candidates.

Our sources did not reveal the names of any of those other candidates.

The search for a new UNC President began in January after a new Republican majority on the board forced out Ross, a Democrat, who will leave at the end of the year.

Talk of Spellings' candidacy were confirmed Friday when she walked into the SAS Software auditorium in Cary where the board was meeting before a vote was taken to close the meeting.

A photographer for North Carolina Policy Watch was taking a picture of former state legislator Thom Goolsby, a Republican who is now a member of the board.

He later realized that Spellings was standing to the left of Goolsby in the picture.

Goolsby created a stir when he sent an email to Board Chairman John Fennebresque asking him to step down after the chairman announced today's emergency meeting.

He was joined in that call by other Republicans on the board and in the state legislature.

They believe the search led by Fennebresque has not been transparent enough.

They are also upset that an emergency meeting was called when some members couldn't attend and called to meet just one candidate.

A bill passed by the legislature in its latest session and scheduled to go into effect in just weeks, requires that the search committee present at least three candidates.

Sources in today's meeting tell ABC 11 that Fennebresque left the meeting for more than an hour as members met Spellings.

It was a tactic one of his critics praised saying the chairman removed his "lightning rod" personality from the meeting.

That critic says it was an unspoken consensus that today's meeting was not the time or place to address concerns about the chairman but predicted Fennebresque's tenure might end after a search for a president is completed.

A number of board Republicans who are upset with the chairman are pleased that Spellings, the Education Secretary under George W. Bush, is a candidate and fear scaring her off if the barbs aimed at Fennebresque aren't quelled during the search.

After the meeting Fennebresque told ABC 11's Ed Crump "It was a productive meeting" but wouldn't comment further.