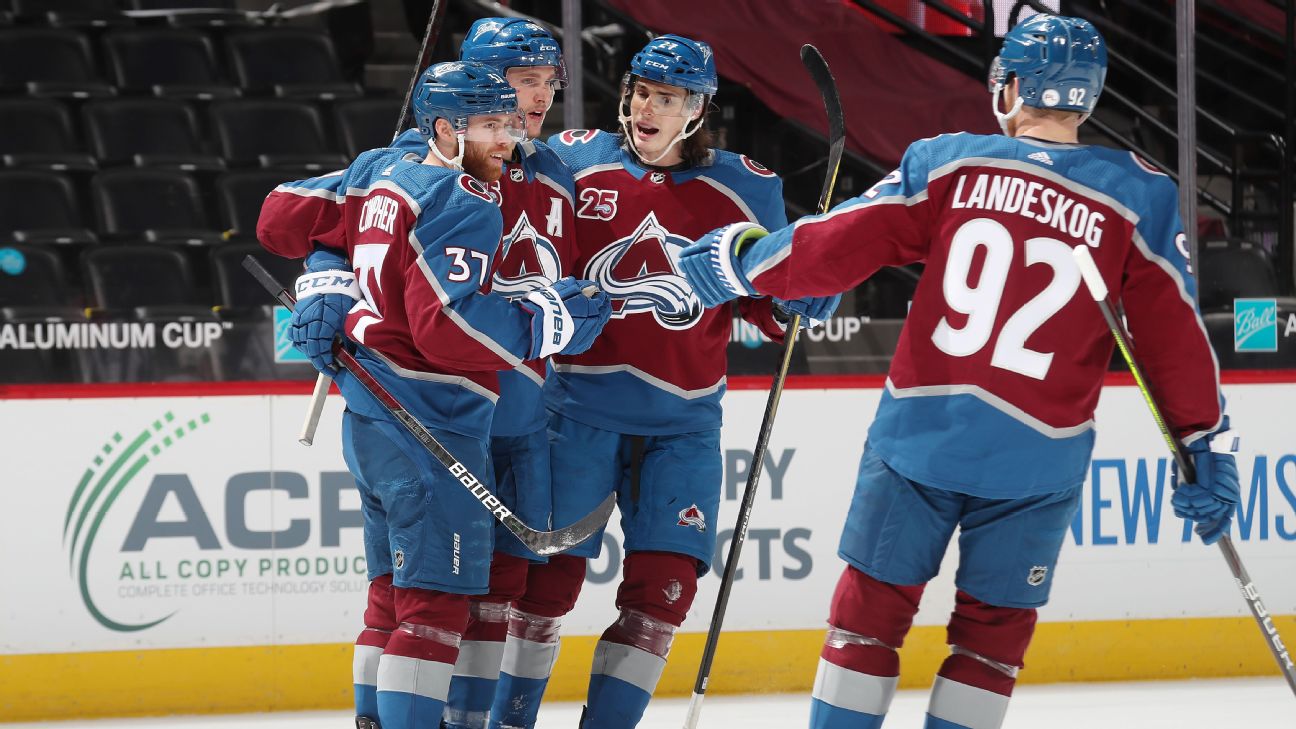 Two overtime games, and one absolute barnburner in front of a wild crowd in Florida. The road teams went 3-0. No one held more than a one-goal lead. The second day of the 2021 Stanley Cup playoffs brought the heat. And to think, half of the series haven't even started yet.

Two of those series yet to start involve No. 1 seeds. The Colorado Avalanche were the top team in the West Division, and also took home the Presidents' Trophy as the No. 1 overall seed. They'll begin their series against the St. Louis Blues. Meanwhile, the Central Division champion Carolina Hurricanes square off against the Nashville Predators.

First round, Game 2: No. 3 Boston Bruins at No. 2 Washington Capitals (Caps lead 1-0) | 7:30 p.m. ET
Before the trade deadline, the Bruins' top line of Brad Marchand, Patrice Bergeron and David Pastrnak carried the offense, accounting for 48% of Bruins goals. Boston wants a more balanced attack, but will be looking for more from its top stars, who accounted for just one assist in the series opener. Washington goalie Ilya Samsonov was back on the ice Sunday for the Caps after coming off COVID-19 protocols. He's eligible to play, but will coach Peter Laviolette ride the suddenly hot hand of Craig Anderson, the 39-year-old unlikely savior in Game 1?

First round, Game 1: No. 4 Nashville Predators at No. 1 Carolina Hurricanes | 8 p.m. ET
The Predators went 19-7-1 over the last two months to salvage what was looking like a lost season. Another series storyline to watch: It's potentially Pekka Rinne's last go in Nashville, as the 38-year-old hits free agency this summer. The Canes were one of the NHL's best teams all season -- they have depth, top-end talent, and play fast. Carolina is likely to start veteran goalie Petr Mrazek for Game 1, but it wouldn't be shocking to see it turn to Alex Nedeljkovic at some point in this series. After going on waivers earlier this season, the rookie made 23 starts, and posted a .932 save percentage and a 1.90 goals-against average.Series preview

First round, Game 1: No. 4 St. Louis Blues at No. 1 Colorado Avalanche | 10 p.m. ET
These teams meet in the playoffs for the first time since the 2001 Western Conference finals, which Colorado won, en route to its most recent Stanley Cup. The Presidents' Trophy-winning Avs are heavily favored, and welcome Nathan MacKinnon back to the lineup after he missed four of the last five regular-season games with minor injuries. That's good news, as he posted 14 points (six goals, eight assists) in eight games against the Blues this season. St. Louis could be without its top scorer, David Perron, who entered the NHL's COVID-19 protocol list over the weekend.Series preview

New York Islanders 4, Pittsburgh Penguins 3 (OT) (Isles lead 1-0)
No Evgeni Malkin for the Penguins, no Semyon Varlamov for the Islanders, but plenty to like in this game. For Pittsburgh, Sidney Crosby scored on a terrific deflection for his 69th career playoff goal -- which ties Alex Ovechkin for 18th-most all time. Tristan Jarry was shaky in his second career postseason start, allowing two goals from low-danger shots, per Natural Stat Trick. The Islanders grinded it out, and GM Lou Lamoriello's acquisitions at the past two trade deadlines became the stars. Jean-Gabriel Pageau, who joined the team in 2020, had a goal and two assists, while Kyle Palmieri -- the longtime New Jersey Devils winger who came over in 2021 -- scored twice, including the overtime winner.Full recap

Minnesota Wild 1, Vegas Golden Knights 0 (OT) (Wild lead 1-0)
This game was 0-0 for 60 minutes, but it was anything but boring. This was an ultimate goalie duel between Marc-Andre Fleury and Cam Talbot. Vegas leaves frustrated after controlling most of the game, including an 81-47 edge in shot attempts. The one that finally got through required a deflection off Vegas defenseman Alec Martinez's skate. But the scorer, Joel Eriksson Ek, was a deserving hero. It has been a breakout season for the 24-year-old, who upped his goal total from eight last season to 19 in 2021. "Obviously, it was a big moment," coach Dean Evason said. "He does everything for us.''Full recap

Tampa Bay Lightning 5, Florida Panthers 4 (Lightning lead 1-0)
It was the only game of the opening weekend not to require overtime, but it may have been the most entertaining. The Panthers welcomed 9,000 fans into the building, and the energy was electric. Relentless pace, along with some nastiness. "Certainly Game 1 is a feel-out game," Lightning captain Steven Stamkos said. "And they came out extremely hard." The stars also came out; Aleksander Barkov, Jonathan Huberdeau, Brayden Point and Nikita Kucherov were all fantastic. There were four lead changes in total, but the key detail is this: The Lightning were the only team in the regular season to not lose a game when leading after two periods. After entering the third up 3-2, they kept that streak alive.Full recap

The Isles gave up a first-round pick to acquire Palmieri and Travis Zajac from the division-rival Devils. Palmieri scored only two goals in 17 regular-season games with the Islanders, but he was acquired to make an impact in the postseason. Did he ever. The Smithtown, New York, native scored twice, including the overtime winner, against the Penguins.

Said coach Barry Trotz: "He wanted to show he was worth everything that we gave up at the trade deadline. So there's a different pressure for him, and we just worked through it and stuck with it and hopefully we get rewarded through the playoffs."

After a 42-save performance against the Golden Knights in the opener, propelling a 1-0 overtime win, Talbot has now recorded playoff shutouts with three franchises: the Wild, the Flames and the Oilers. Only Curtis Joseph has recorded a playoff shutout for more franchises (four).

This one came on a breakaway, and it was a beauty:

Talking point of the day

Nikita Kucherov missed the entire regular season after undergoing hip surgery. It was a blow for the Lightning to miss their top winger, who was just two years removed from winning league MVP. It was also somewhat of a relief.

Tampa Bay was tight against the salary cap, and placing Kucherov and his $9.5 million cap hit on long-term injured reserve made GM Julien BriseBois' life a bit easier in the regular season. Conveniently, Kucherov was deemed good-to-go for the playoffs -- when the salary cap becomes moot.

Plenty of fans cried cap circumvention, though the Lightning insist it's a confluence of luck and timing (don't you think they would have wanted their top goal scorer available for the regular season?). All we know now is that the 27-year-old is back, and making an incredible impact. Kucherov scored a pair of power-play goals, and notched the primary assist on another.

Said teammate Victor Hedman: "It's very impressive to see him deliver like that in the first game back. The scary part is he's only going to get better."

Record breaker of the day

Marc-Andre Fleury got the Game 1 start for the Vegas Golden Knights, a year after he lost his starting job to Robin Lehner in the 2020 bubble. (You can expect Vegas to rotate both goalies this spring).

By suiting up, Fleury became the first goalie in NHL history to appear in 15 consecutive postseasons.

It's an amazing accomplishment, and even more incredible considering it came after the most trying season of Fleury's professional career, as he also continued tomourn the loss of his father, André. The 36-year-old made 29 saves on Sunday, including some spectacular ones: 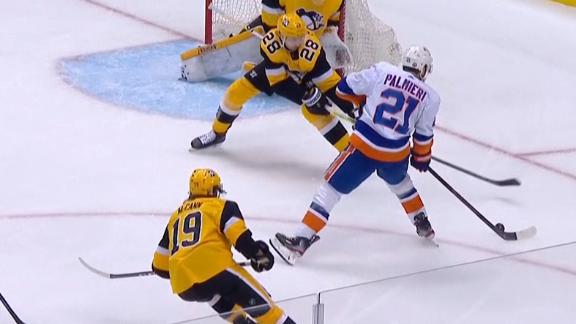 Palmieri sneaks in OT winner as Isles take series lead
Kyle Palmieri wrists a shot past Tristan Jarry in overtime to give the Islanders a 4-3 win over the Penguins in Game 1. 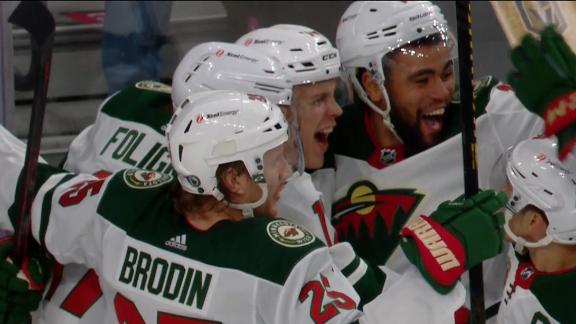 Eriksson Ek the hero in OT to lift Wild in Game 1
Joel Eriksson Ek's shot deflects off Golden Knights defenseman Alec Martinez and goes in the net in the Wild's 1-0 win. 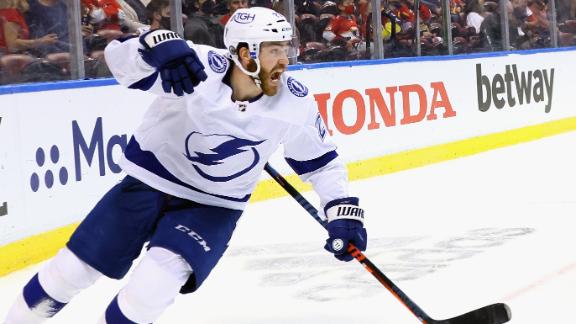