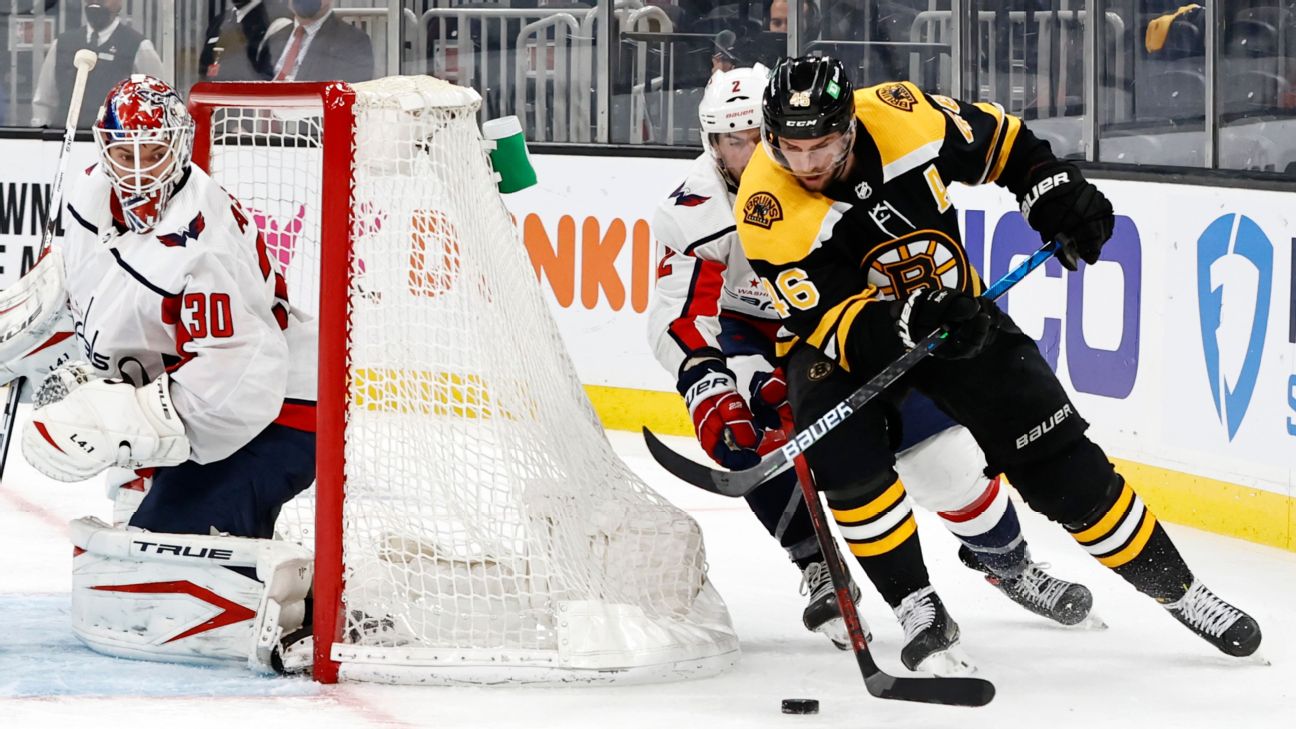 Thursday night's four-game playoff slate was all about theatrics, and plenty of offense. Thirty goals were scored over four games.

Friday is a big day for clarification, as the Washington Capitals try to even their series with the Boston Bruins, the Colorado Avalanche look to build a 3-0 lead over the St. Louis Blues and the Carolina Hurricanes look to do the same against the Nashville Predators. Plus, can the Jets win another one in Edmonton to go up 2-0 heading back to Winnipeg?

This series has been one of the most physical of the first round, but the B's have answered the bell. "I think we have not been intimidated for one second by the physicality of their team," Bruins coach Bruce Cassidy said Thursday. Washington was supposed to be a heavier team, but Boston had a 60-57 edge in hits during Wednesday's double-overtime win in Game 3. On the other side, the Capitals have used three goalies through the first three games, and had a frustrating gaffe at the end of Game 3 involving Ilya Samsonov. But playing for the first time since May 1, the 24-year-old was strong, posting 40 saves, including 17 in the overtime periods. He'll look to get past the moment. "Everybody helped with me in the locker room, coaches, everybody," Samsonov said. "The game is much easier when you get the support."

After 12,000 fans packed the arena in Raleigh for each of the first two games in this series ... 12,000 fans are expected in Nashville. The Predators have had more than nine minutes per game with an extra man advantage, and can't get anything going, sitting at 0-for-10. As captain Roman Josi noted: "It hasn't been good the last couple years." On the other end, Carolina has been pretty happy with its penalty killing. "You can't say enough about those guys," coach Rod Brind'Amour said. "All the penalty killers, the goaltending, [Brett] Pesce and [Brady] Skjei in particular. They obviously had to step up today and they did in a huge way. Just incredible performances really by those guys."

Most of what you need to know about Winnipeg's Game 1 win can be summed up in one sentence: The Jets limited Connor McDavid to just one shot on goal. Contain the (presumed) league MVP, and you have a chance against an Oilers team that lacks depth. (Award ballots for voters were due Thursday, and McDavid is a lock for his second Hart Trophy.) Though the 4-1 score in Game 1 looked dominating, the Oilers insist that it was much closer than it seemed. "I thought we had the puck a lot of the night, played in their zone ... Just didn't find a way to get one," McDavid said. "They get a tip. We didn't. That's playoff hockey."

Nazem Kadri will have a hearing with the Department of Player Safety on Friday for his illegal check to the head of Justin Faulk. It's widely believed Kadri will face a suspension -- perhaps for the rest of this series -- considering his past offenses. Kadri has been suspended five times by the NHL since 2013, including twice in the playoffs with the Maple Leafs. Otherwise, everything in this series has been swinging Colorado's way, even as the matchup shifts to St. Louis. It has been a rough go for the Blues, who have been without their leading scorer David Perron (COVID-19 protocols) and were down to four defensemen down the stretch of Game 2.

Just when it looked like the Lightning might run away with this one, the Panthers stormed back and made it a series. Both teams were resilient, each overcoming two-goal deficits at different points in the game. Tampa Bay had a monstrous five-goal second period, and the Cats clawed back. Ultimately, the Lightning did something they hadn't done all season: lose a game when taking a lead into the third period. The hero for Florida was unheralded Ryan Lomberg. The Panthers hadn't scored a playoff OT winner since 1996, which represented the longest active drought in the NHL. Full recap

Nassau Coliseum was rocking. The game was a bit bonkers. And yes, it's not a typo; that goal total actually happened in a New York Islanders game. Evgeni Malkin rejoined Pittsburgh's lineup after missing the first two playoff games (he also missed 23 regular-season games with injury). But the real star for Pittsburgh in this game was Jeff Carter, who scored two goals. "It was a bit of a roller coaster tonight," Carter said. "All hell kind of broke loose there, but we stuck with it. You give one up, you get right back on the horse and keep working." Full recap

This game began with a scary moment: John Tavares was carted away on a stretcher after Corey Perry accidentally kneed him in the face. While the Leafs reported Tavares was conscious and "communicating well," the 30-year-old remained in the hospital overnight. "It's a big loss. It's our captain," coach Sheldon Keefe said. "Good teams overcome these types of things. And that's gonna be on us here now." Toronto couldn't get much past Carey Price, who was sharp in his first NHL action since April 19. The Canadiens won this after Paul Byron scored a short-handed goal in the third period. That's on brand, as Montreal tied Boston for the NHL lead this season with nine shorties. Full recap

The series is now in St. Paul, and the Wild put on a show for their home crowd, roughly 4,500 fans, which is 25% of Xcel Energy Center's capacity. Ryan Hartman opened the scoring, then Joel Eriksson Ek made it 2-0 before the first-period intermission. Vegas, meanwhile, was starting Marc-Andre Fleury for the third straight game, and things were looking bleak. "It definitely wasn't a good start," captain Mark Stone said. "We just weren't prepared. But it's better to be down 2-0 after 20." After a three-goal second period, the Golden Knights were back in business. "We've done it before, and usually it's the same formula: no panic, regroup, stick with it," coach Peter DeBoer said, "and everybody contributing." The Golden Knights' game-tying goal was scored by Patrick Brown, a healthy scratch for the first two games. Full recap

Since he was acquired at the deadline, Carter has scored 12 goals for the Penguins, including two on Thursday. Only Brad Marchand of the Bruins has as many in that time frame.


Lomberg averaged less than 10 minutes per game in his 34 appearances with the Panthers this season. In his entire NHL career before Thursday night, he had scored two goals. And then he scores the overtime winner in a 6-5 barnburner because, of course.

The captain got the Golden Knights on the board in the second, and sealed it off with an empty-netter, all part of Vegas scoring five unanswered goals in a massive comeback win.

Scary moment of the day

In the first period, John Tavares fell to the ice after a hit by Ben Chiarot. As he was falling, he was clipped in the head by Corey Perry's knee.

Perry said he tried to jump over Tavares but his knee inadvertently struck Tavares' head.

"I don't know what else to do there," said Perry. "I tried to jump. I know Johnny pretty well, and I just hope he's OK."

Tavares gave a thumbs up as he was wheeled off the ice.

"I honestly felt sick to my stomach when I saw it," Perry said. "When I saw him, with the way he is, it's a scary situation. I'll reach out to him and talk to him and hopefully he's OK."

Tavares spent the night at the hospital for further testing, but the Leafs reported their captain was "conscious and communicating well."

As Canadiens goalie Carey Price summed up: "I was pretty disheartened to see that happen to such a good guy. It's a sobering reminder that hockey is just a game."

The Lightning had won 151 straight games when scoring five or more goals (regular season and postseason), which was the longest such streak in NHL history. That ended on Thursday, when the Panthers claimed a 6-5 overtime win. 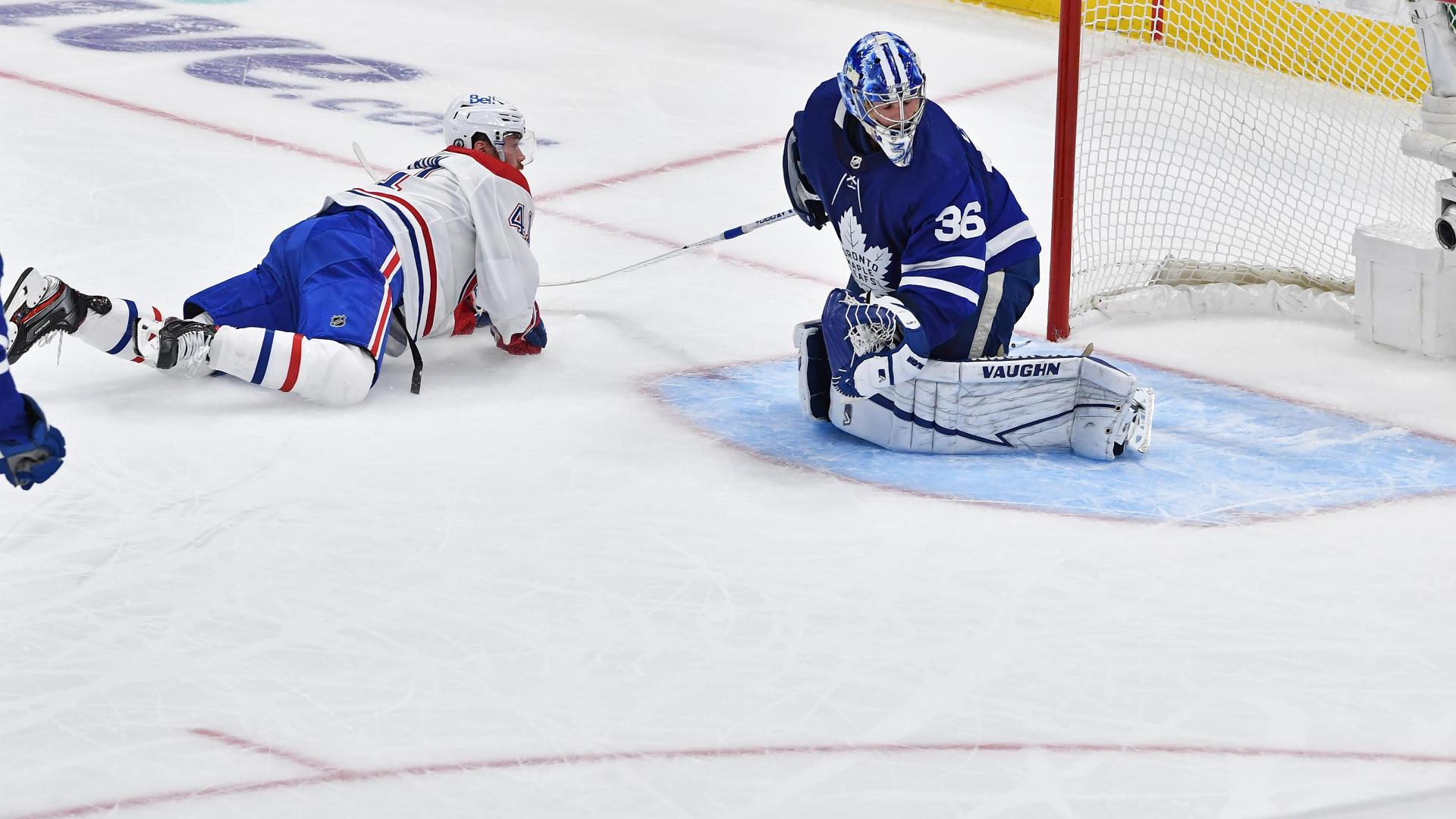 Paul Byron nets game-winning goal from knees for Canadiens
Paul Byron flies down the ice and finishes with a goal from his knees to lift the Canadiens to a 2-1 win vs. the Maple Leafs. 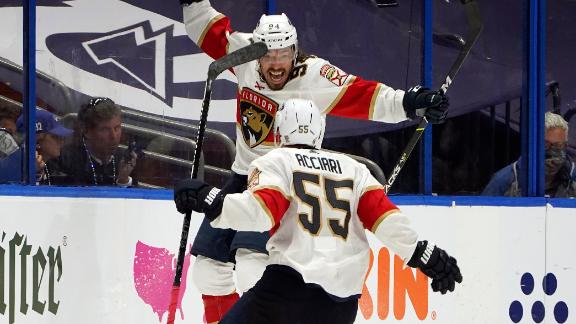 Panthers win much-needed Game 3 with OT goal
Ryan Lomberg gets behind the Lightning defense and nets the overtime winner in the Panthers' 6-5 win. 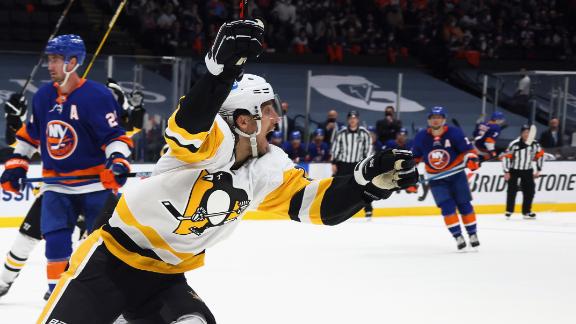 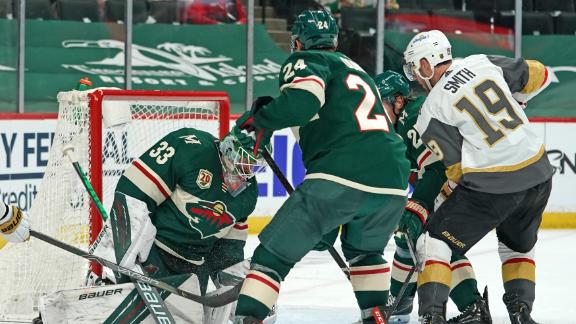