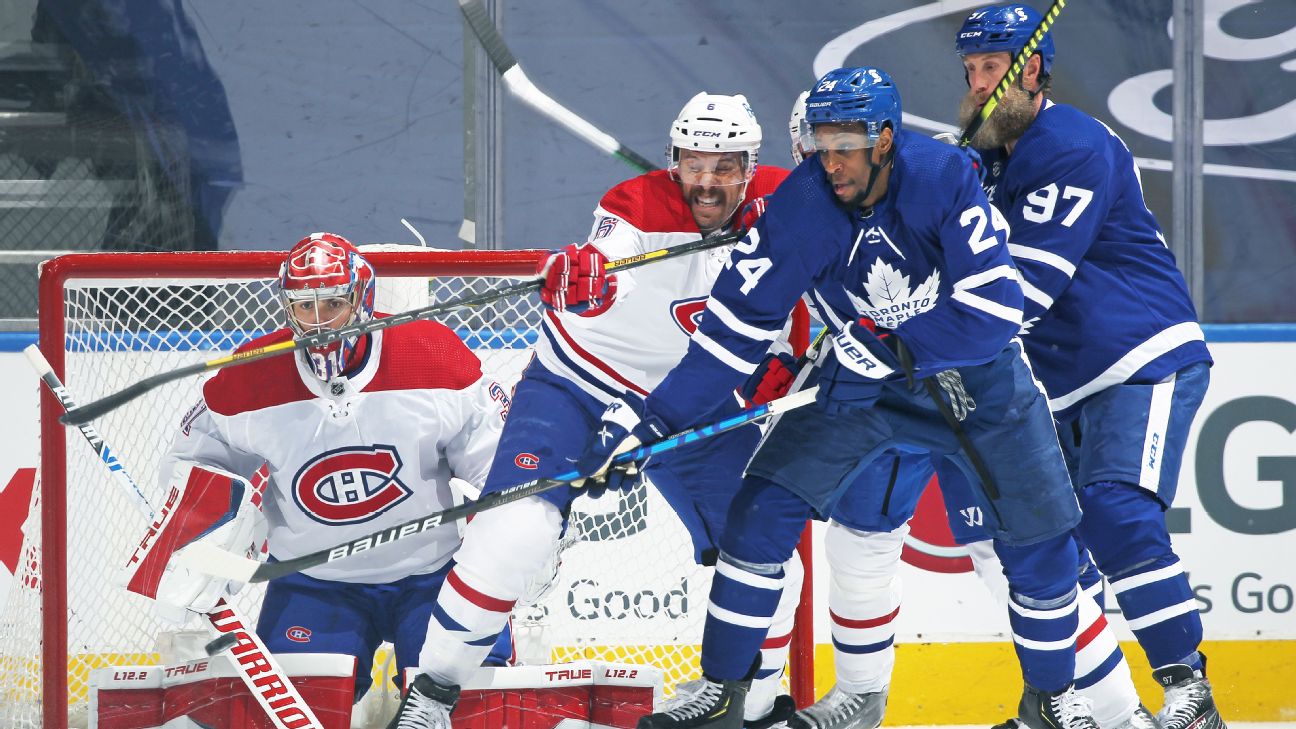 The Toronto Maple Leafs play their first game after captain John Tavares suffered a disturbing concussion in their Game 1 loss, and the Florida Panthers try to rally in the Battle of Florida as all-day hockey returns to the 2021 Stanley Cup playoffs on Saturday.

Meanwhile, the Boston Bruins and Colorado Avalanche pushed their opponents to the brink on Friday night, and the Winnipeg Jets went up 2-0 on Connor McDavid and the Edmonton Oilers.

The Panthers will turn back to Sergei Bobrovsky for Game 4 after Chris Driedger got the crease for Games 2 and 3. Bobrovsky stopped all nine shots he faced in Game 4, winning the game while playing 25:56. The Lightning will try to bounce back from a home loss. "For me, if I'm sitting here saying you've got a 2-1 lead, I would have taken it. We've got a two-games-to-one lead and we've had 2-1 leads before in playoff series and known how to deal with them," said Lightning coach Jon Cooper.

There are calls from media and fans to have the Islanders flip back to rookie Ilya Sorokin in goal for a critical Game 4. Starter Semyon Varlamov has continued to struggle against the Penguins, with a career .899 save percentage against them in the regular season and the playoffs. The Penguins will try to avoid getting involved in the physical shenanigans the teams engaged in during the third period of Game 3.

The Maple Leafs will attempt to move past the emotional devastation of watching captain John Tavares stretchered off the ice after an accidental collision with Corey Perry in Game 1. "He wants nothing more than for us to win," said defenseman Morgan Rielly, who spoke with Tavares after the injury. "We're playing for him. John's a huge part of our group and we're going to be thinking about him every day until he's back and feeling good. But the attitude here today is: We have to prepare for Game 2." Nick Foligno will likely shift to center, a position he played before reaching the NHL as well as intermittently during his career.

The Wild never had a three-game losing streak in the regular season. They're trying to avoid one in this series. "We need to build on that now. We've been an extremely good team at rebounding this year. We have a lot of character in that room and we're extremely resilient, so I know we can put out a 60 minutes on Saturday," said goalie Cam Talbot. Rookie sensation Kirill Kaprizov is still looking for his first goal of the postseason.

Boston coach Bruce Cassidy said it best: "We wanted it and it showed." David Pastrnak scored his first goal of the playoffs and added an assist, while Charlie McAvoy had three assists. Boston outshot the Capitals 37-20 and went 3-for-5 on the power play. Tuukka Rask made 19 saves for his 54th NHL postseason win, now the most in Bruins history. Boston goes for the elimination on Sunday night. "It's just not good enough," said Capitals winger Tom Wilson. "I don't know what the reason is. Obviously, at the beginning of the game, teams are feeling each other out a little bit, but we need to be the desperate team in that situation, and push the pace and take it to them. It just wasn't there." Full recap.

Matt Duchene's goal at 14:54 of double overtime gave the Predators new life in their series, cutting Carolina's lead to 2-1. Juuse Saros made 52 saves. Sebastian Aho had a goal and two assists for the Hurricanes, and rookie goalie Alex Nedeljkovic made 49 saves. The game featured five lead changes and was played in front of 12,125 fans in Nashville. "It was a grind of a game. They're going to be tight," said Hurricanes center Jordan Staal. "The boys battled hard. We were on the wrong side of this one."Full recap.

Paul Stastny scored 4:06 into overtime and Connor Hellebuyck made 38 saves to give the Jets consecutive wins in Edmonton to start the postseason. More importantly, they managed to hold Connor McDavid and Leon Draisaitl without a point for two straight games. McDavid went two games without a point only once during the regular season. "Obviously we dug ourselves a bit of a hole. Both games could have gone either way. It's not the position we want to be in," said McDavid. Full recap.

The Avalanche pushed the Blues to the brink with another emphatic win over short-handed St. Louis. Defensemen Justin Faulk and Robert Bortuzzo were out after injurious hits by the Avalanche in Game 2; Nazem Kadri was suspended eight games for his hit to the head of Faulk. David Perron remained on the NHL's COVID absence list for the third straight game. For the Avs, Ryan Graves had a goal and two assists, while Alex Newhook scored his first NHL goal. "Whenever you have a chance to eliminate someone, it's always the hardest game to win. I think our guys understand that you try to get out of a series when you have the opportunities to that," said Colorado coach Jared Bednar. Full recap.

Duchene scored a tremendous goal in double overtime to give the Predators the win. They've been waiting for their star players to step up, and Duchene did just that. "It feels good, but it's right back at it. We're still down in the series. We got some traction tonight. But we gotta get the next one," he said. "Take the good vibes and move forward."

The veteran center scored his first goal of the playoffs to give the Jets their second straight win in Edmonton to take a 2-0 series lead.

Stick tap to Newhook, 20, who scored his first NHL goal to give the Avalanche a 2-0 lead en route to their Game 2 rout. "I saw a lot of net. I was hoping I could put it in. It was a big point of the game," said Newhook.

Officiating angst of the day

Both Carolina coach Rod Brind'Amour and St. Louis coach Craig Berube spoke up about the officiating on Friday night.

"We played our butts off. We played great, we played hard, we're playing a great team. We're in a battle. Nashville's a phenomenal team. But we're also fighting the refs. That's plain and simple," said Brind'Amour. "You can't tell me two games in a row, they get seven or eight [power plays] and [we] get three? When the game is this even? It's not right."

Said Berube: "The refereeing, every game, we get one or two calls. It's usually late in the third period. They're getting four a game or five a game. I mean, it's not that lopsided. I'm not sure why we don't get the calls that we deserve. [Colton] Parayko gets tripped in the corner. They go down and score a goal. He gets tripped in the corner, slew-footed, and they don't call it, OK? And it cost us a goal. It's terrible. It's so one-sided, it's not even funny."

Controversial hit of the day

Capitals defenseman Dmitry Orlov delivered a hit on Boston defenseman Kevan Miller, who was transported to the hospital for further evaluation. The referees called a major but reduced it to a roughing double minor on review.

Hands of the day

Jets defenseman Dylan DeMelo gave his goalie a hand on what might have been a Connor McDavid goal. "I thought that was the emotional change in the game. He's a very popular guy in our room," said coach Paul Maurice. 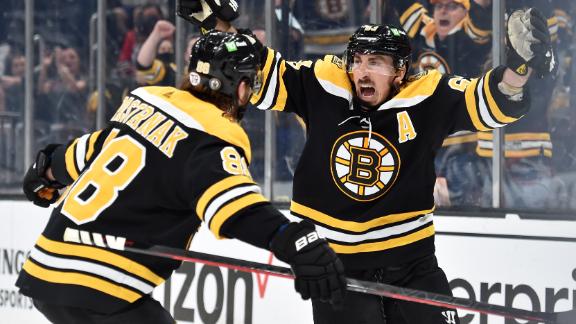 Bruins score two goals 34 seconds apart to take 3-1 series lead
David Pastrnak and Charlie Coyle each score in the third period as the Bruins go up 3-1 in the series over the Capitals. 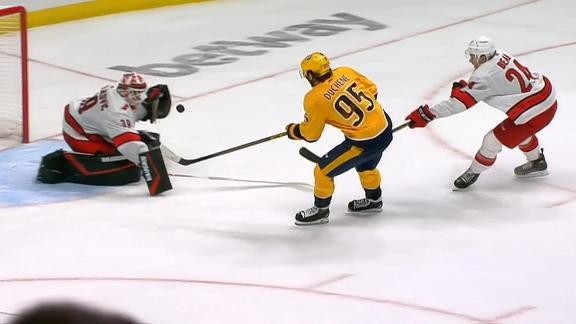 Matt Duchene chips goalie for nifty Predators double-OT winner
Matt Duchene muscles by a Hurricanes defender and scores a winner in double overtime as the Predators cut their series deficit to 2-1. 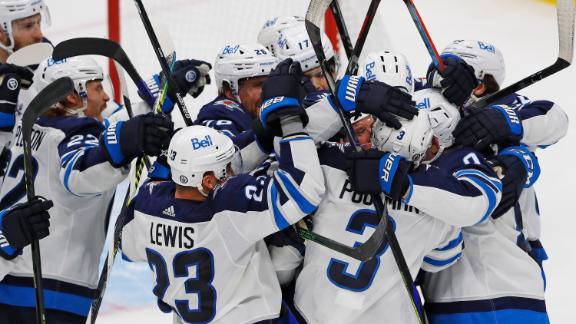 Paul Stastny's quick wrister hands Jets an OT victory
Paul Stastny scores the game's first goal in overtime as the Jets go up 2-0 in the series on the Oilers. 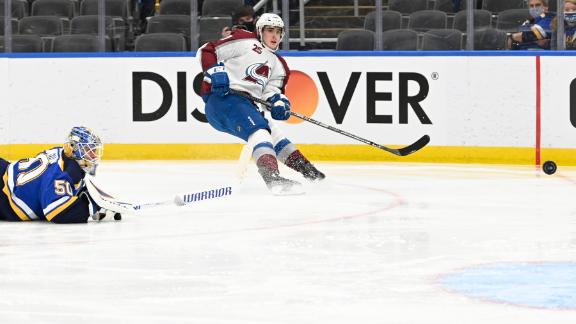