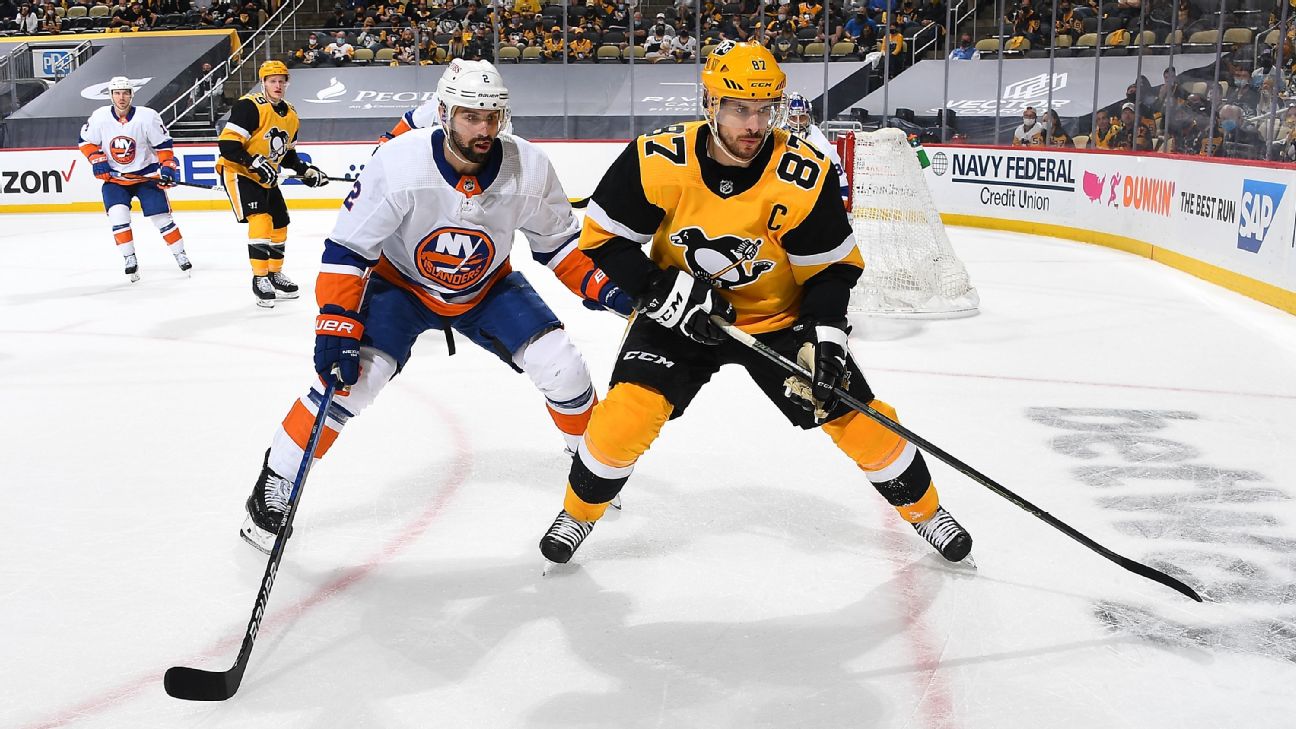 Three teams face elimination on Wednesday night in the Stanley Cup playoffs. The Pittsburgh Penguins are reeling after consecutive losses and now must earn a series-saving win at Nassau Coliseum. Meanwhile, the Minnesota Wild and Florida Panthers are hoping to build on momentum-shifting Game 5 wins to extend their series one more game as well.

The Islanders try to extend the last days of Nassau Coliseum for another round as they go for the elimination of the Penguins. Two of New York's three victories have arguably been gift-wrapped by Pittsburgh goalie Tristan Jarry, including Josh Bailey's Game 5 double-overtime goal that came off a Jarry misplay. With Casey DeSmith out with an undisclosed injury, it's Jarry or bust for Pittsburgh. He has a .902 save percentage in the series; his counterpart Ilya Sorokin has a .951 save percentage. "If you talk to a defensemen or a forward, we make plenty of mistakes all throughout the game, but there's people there to back you up for it and so they're not as noticeable," defenseman Mike Mathesonsaid. "We have total confidence in Tristan. I think he's one of the best goalies in the league and he proves that night in and night out. I don't think anybody has any doubt in his ability."

Did Spencer Knight change the dynamic of this series? In Game 5, the rookie goalie gave the Panthers the saves they weren't getting from veterans Sergei Bobrovsky and Chris Driedger, with Aleksander Barkov going as far as to say that "he won the game for us." The Lightning get a second crack at trying to close out the pesky Panthers. "I have complete and utter confidence that they can close the series out. Whether you're going to do it or not, no one can say. But do I believe we can? One hundred percent," coach Jon Cooper said.

After scoring four goals in four games against Marc-Andre Fleury, the Wild finally had a breakthrough in their Game 5 win, scoring three times in the first period of a 4-1 victory. Among the goal scorers: Rookie sensation Kirill Kaprizov, who notched his first goal of the series. "We like how we scored our goals. We got to the net. We scored the dirty goals," Minnesota coachDean Evasonsaid. That said, the Knights owned the last 40 minutes of the game, holding a 48-15 shot attempt advantage in the final two periods. Minnesota hung on; can they hang on again to extend the series to a Game 7?

There was speculation the Leafs would start Frederik Andersen in Game 4, with Jack Campbell having played 24 hours earlier. But Toronto stuck with Campbell, and it paid off: He made 32 saves for his first Stanley Cup playoff shutout, pushing Montreal to the brink of elimination. "I felt pretty good, I think the guys just did a great job in front of me," he said. The Leafs have not led a series 3-1 since 1987, and are seeking their first series win since 2004.Full recap

What an entertaining game between these two burgeoning rivals. The Hurricanes rallied twice to send the game into overtime -- the third straight OT game between these two teams -- where Jordan Staal scored at 2:03 to clinch the Game 5 win. It was a 4-on-4 goal. Carolina defenseman Brady Skjei was called for holding just 56 seconds into overtime, but Nashville's Alexandre Carrier committed an interference penalty that negated the Predators' power play. Alex Nedeljkovic made 23 saves for Carolina, while Juuse Saros made 34 saves for Nashville. Yakov Trenin had two goals in the loss. Full recap

It was batter up for Staal in overtime. After Juuse Saros stopped a point shot from Brett Pesce, Staal batted the puck out of the air just enough to bounce it past the Nashville goalie. That was after Saros tried to knock it away with his stick.

The former Canadiens forward was an offensive force for the Leafs, scoring a goal and adding two assists. He was a healthy scratch in Game 1. "He's stayed with it, stayed ready. He's gotten better in each game that he's played and obviously he was a major difference-maker tonight for us," said Toronto coach Sheldon Keefe.


Staal might not have gotten a chance at OT heroics were it not for Necas. The Carolina forward scored in the first period and then scored his incredible wraparound goal at 12:55 of the third when the Hurricanes needed it most.

"We had a tough time getting into their end. A talent like that can change the game," Staal said.

Coaching challenge of the day

Predators coach John Hynes made his first coach's challenge of the season -- and first of his stint in Nashville -- and it was a clutch one, getting a Hurricanes goal taken off the board for goalie interference.

Per the NHL: "Video review determined Carolina's Warren Foegele impaired Juuse Saros' ability to play his position in the crease prior to Jordan Staal's goal. The decision was made in accordance with Rule 69.1 which states, in part, 'Goals should be disallowed only if: (1) an attacking player, either by his positioning or by contact, impairs the goalkeeper's ability to move freely within his crease or defend his goal.'"

Streak of the day

William Nylander scored his fourth goal in four games, becoming the first Maple Leafs player to score a goal in each of their first four playoff games since Wendel Clark in 1986. Nylander now has points in 16 of his past 18 games, tracking back to the regular season.

"Not a lot of thoughts going through my mind. Just wanted some bear hugs from the fellas."

Remembrance of the day

One year after the murder of George Floyd, the NHL took a moment to "reaffirm our pledge to bring about positive social and cultural changes to local communities" and offer a moment of reflection "for the victims of racial injustice." 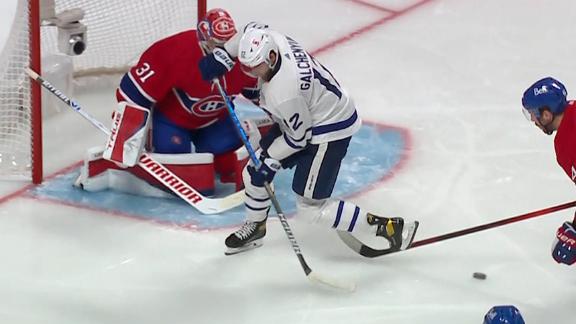 Galchenyuk's no-look pass highlights Toronto's 3-goal 2nd period
The Maple Leafs get three goals in the second period leading them to the 3-1 series advantage over Montreal. 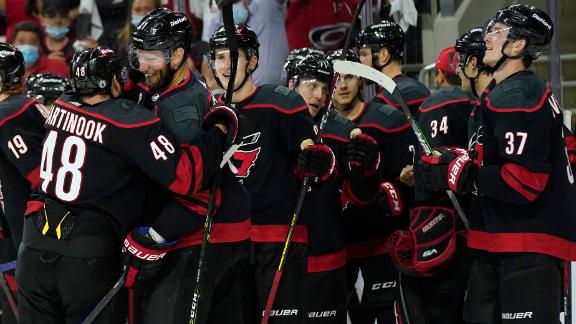