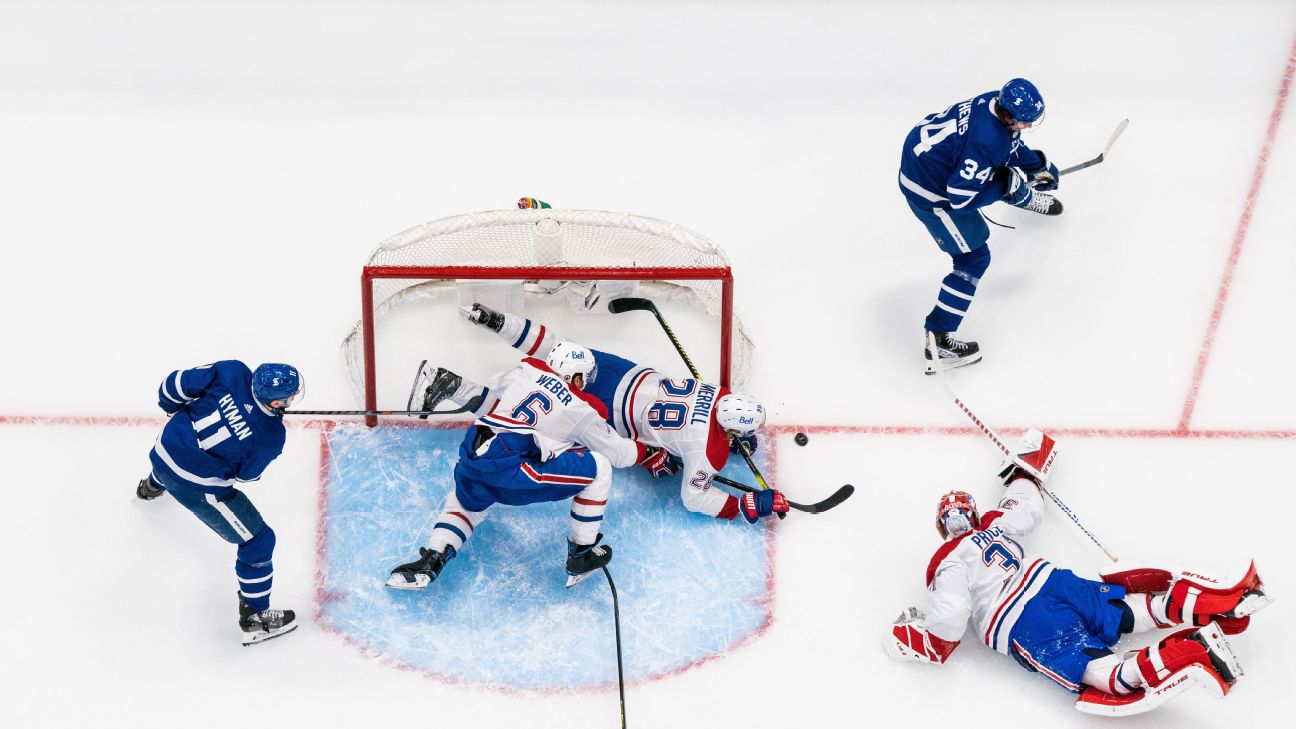 On Saturday night, the Toronto Maple Leafs will get their second chance to close out their first playoff series win since before the 2004-05 lockout. Should the Montreal Canadiens win, the Leafs would go from being up 3-1 to having to fight through a Game 7.

Speaking of which, that's exactly what happened to the Vegas Golden Knights, who were up 3-1 in their series before two Minnesota Wild wins pushed their series to a Game 7 Friday night. The Knights emerged victorious, setting up a showdown with the Colorado Avalanche.


And oh yeah, the second round gets started Saturday as well, with the New York Islanders visiting the Boston Bruins, in the first series between those teams since 1983.

Follow the Maple Leafs for any period of time and you already know about the snakebit playoff history. After fighting back from a 3-0 deficit in Game 5, the Leafs surrendered the game-winning goal to Nick Suzuki just 59 seconds into overtime. However, there's no need to panic yet, Toronto has controlled the offense this series. The top line of Mitchell Marner, Auston Matthews and Zach Hyman has accounted for 55 shots, and second-line winger William Nylander leads the team with four goals. For the first time this season, the Canadiens get to play in front of their fans. Thanks to a decision by the Quebec government, the Bell Centre will host 2,500 tonight, making the Habs the first Canadian team to have ticketed fans in attendance. Those fans will get to see Canadiens young guns such as Suzuki and Cole Caufield try to make the most of their chances against Jack Campbell. The offense will need every boost possible, so it will be captivating to see whether playing in front of fans will give the team a lift tonight.

The Islanders won the first five meetings with the Bruins this season, but after acquiring Taylor Hall, the Bruins won the final three. Coming to Boston has been a turning point for the 2018 Hart Trophy winner, who had four goals over those three games against New York and had two goals and an assist during the first round against Washington. But on which Isles goalie will he be trying to score? Semyon Varlamov played like a Vezina Trophy contender this season, but it was rookie Ilya Sorokin in net for all four wins against the Pittsburgh Penguins in the first round. Coach Barry Trotz's decision to put Sorokin in net after Game 3 turned the series, and one would have to imagine Sorokin will start Game 1.

Stat you'll get sick of hearing this series:The Bruins had the 13th, 14th and 15th picks in the 2015 draft, and they took Jakub Zboril, Jake DeBrusk and Zachary Senyshyn. The Islanders picked 16th and chose Mathew Barzal, who has outscored the three Bruins combined for their careers thus far.

Max Pacioretty hadn't played since May 1, but with the Knights needing all hands on deck in Game 7, the veteran forward stepped back into the lineup for the first time in 12 games and lit the lamp for the go-ahead goal in the second period. Center Mattias Janmark was responsible for the ice crew having to clean up a whole lot of hats after scoring his first career hat trick, while Vegas defensemen accounted for two goals after having just one in the first six games.

Veteran Zach Parise and rookie Kirill Kaprizov accounted for the goals for Minnesota. The team was able to get some quality scoring chances, but Vegas goalie Marc-Andre Fleury held firm, including eight saves on shots within 25 feet. There's much to look forward to next year for the Wild, especially with young Kaprizov and the breakout year from center Joel Eriksson Ek, but for now, it's the Golden Knights who advance to face the Colorado Avalanche in a clash of two preseason Cup favorites. Full recap

Absence of the day

Wild defenseman Jonas Brodin left the game after he was shoved into the boards by Nicolas Roy early in the first period. The loss of their top defenseman left the Wild with only five defensemen remaining -- and played a role in Vegas scoring three goals in the second period, blowing the game wide open.

Stat of the day

From ESPN Stats & Information, Mattias Janmark's hat trick is the eighth to occur in a Game 7. The last three players to have a Game 7 hat trick are Janmark, Joel Kiviranta last season and Wayne Gretzky in 1993.

Three stars of the day

Of course we have to start with "Hat-tias." Janmark opened the scoring 5:09 into the first and closed it out with two dagger goals in the third period, including an empty-netter.

2. Marc-Andre Fleury, G, Vegas Golden Knights
After two straight losses, there were questions about whether Fleury would start Game 7. Well, he answered all of those questions with an 18-save effort, including 10 straight over the final 30 minutes. Fleury now has 85 career playoff wins, and if he wins four more, the 17-year veteran will pass Billy Smith and Eddie "The Eagle" Belfour for sole possession of fourth all time.

3. Shea Theodore, D, Vegas Golden Knights
After being held scoreless in the first six games, Theodore logged two assists in 22 minutes of ice time, but his impact went beyond that. According to Natural Stat Trick, when Theodore's pairing with Nick Holden was on the ice, the two controlled the flow of play with an astounding Corsi for percentage of 78%. Additionally, they were matched up against the Kaprizov-Victor Rask-Mats Zuccarello line and held it to zero even-strength points (Kaprizov's goal and Zuccarello's assist came on the power play).

The Leafs' offense doesn't tend to wake up until after the first intermission, scoring only one goal in the first but 10 goals in the second.

Even backup goalie Robin Lehner got into the spirit of things when Janmark scored his third goal, throwing his hat onto the ice.

Question of the day: Rest or rust?

The Colorado Avalanche and Winnipeg Jets will have a significant rest advantage over their opponents, the Vegas Golden Knights and the winner of the Canadiens-Maple Leafs series. I tend to believe that extra rest is always better to heal up your lineup, but it's worth asking whether that could lead to a slow start against an opponent with momentum. 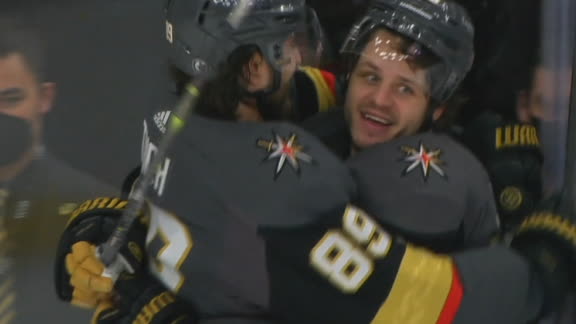