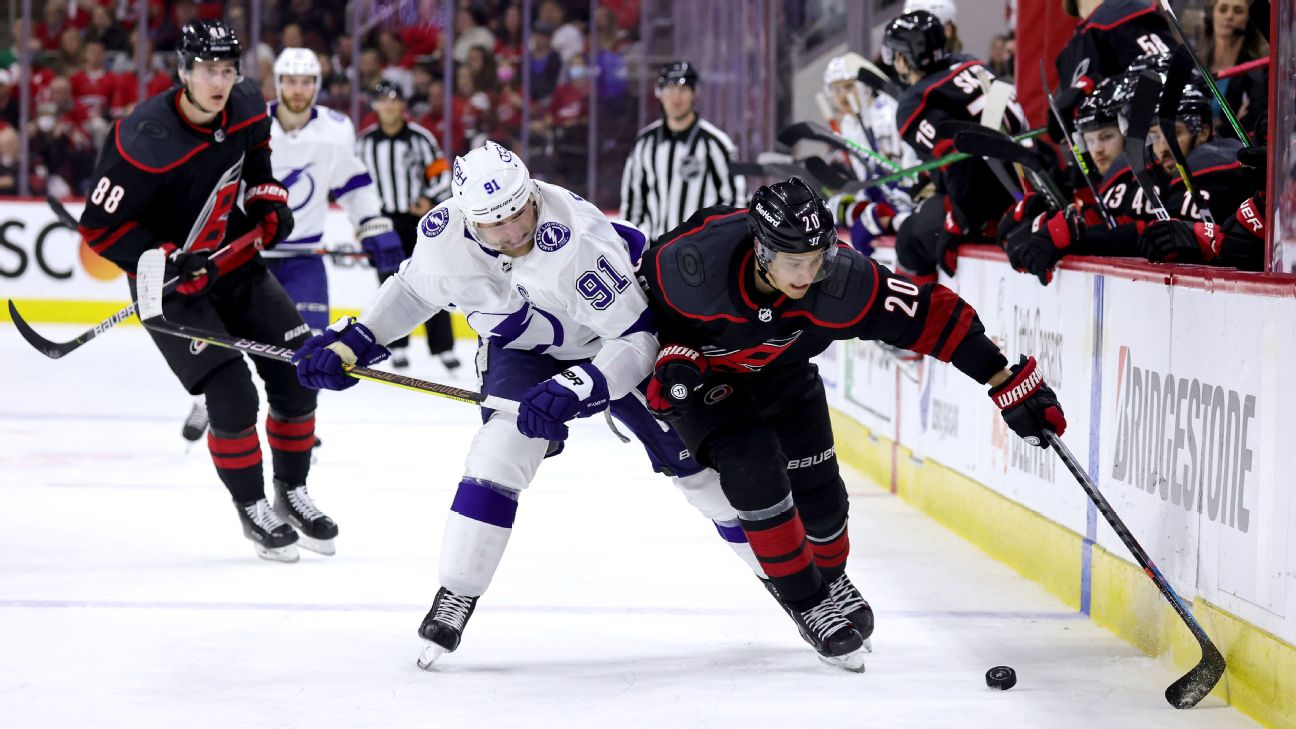 Never doubt that the Toronto Maple Leafs can find new and exciting ways to disappoint their fans and fail in the postseason. Losing star John Tavares in Game 1 to injury, winning three straight games and then losing three straight games to an enormous underdog in the Montreal Canadiens, in their first playoff meeting in 43 years? That's a new one.

Meanwhile, on Tuesday evening, the Tampa Bay Lightning look to take a 2-0 series lead over the Carolina Hurricanes. Teams that take a 1-0 lead in a best-of-seven series hold an all-time series record of 496-224 and are 6-2 in the 2021 Stanley Cup playoffs.

The Hurricanes suffered an injury blow to their offense, as forward Nino Niederreiter is "very, very doubtful" to return in the second round due to an upper-body injury, according to coach Rod Brind'Amour. He already missed Game 1, in which the Canes mustered only one goal against the Lightning. "That's a goal scorer," said Brind'Amour. "You don't replace that. He's on the power play, too. That's an offensive weapon that goes out the window, but it's playoffs. It's next man up. Got to fill the shoes." Jordan Martinook moved up alongsideVincent Trocheck and Martin Necas last game. Meanwhile, the Lightning are looking to go up 2-0 for the third time in their last four playoff series.

The Canadiens were down 3-1 in the series before winning three straight games to eliminate the Maple Leafs, who lost their eighth straight series-clinching game. The score was 3-1 thanks to goals from Brendan Gallagher, Corey Perry and an empty-netter from Tyler Toffoli, and no thanks to Auston Matthews and Mitch Marner, who had one goal combined in the series. Carey Price faced 31 shots and stopped 30 of them, saving his best game for the series finale, and playing his best hockey as a penalty killer in the third period. The Leafs didn't have John Tavares or Jake Muzzin in Game 7, and Nick Foligno was way short of 100%, per coach Sheldon Keefe. But they had three chances to close out an inferior opponent to win their first playoff series since 2004, and choked it away. Such are the Leafs. Montreal moves on to face Winnipeg in the North Division finals starting Wednesday. Full recap.

The Islanders pulled out an overtime victory after it appeared they might let it slip away. New York had a 3-1 lead entering the third period after Josh Bailey, Kyle Palmieri and Jean-Gabriel Pageau scored in the second. But Patrice Bergeron and Brad Marchand scored in the third period for Boston to send the game to overtime. That's where Casey Cizikas ended it at 14:48 on a breakaway, knotting the series at 1-1. Semyon Varlamov made 39 saves in his first start since Game 3 of the first round against Pittsburgh. Full recap.

Price was nearly impenetrable in Game 7, pitching a shutout until William Nylander scored at 18:24 of the third period. He made 30 saves to knock out the Leafs. True to form, he defected praise after the game. "This is the best team game we played this season," said Price.

The bread and butter of Cizikas' game is defense, so naturally that's what led to his breakaway, overtime game winner in Game 2. The Islanders forward forced a turnover by Bruins defenseman Jeremy Lauzon and then was off to the races, beating Tuukka Rask on a high, blocker-side wrist shot. He had one assist in seven playoff games before Game 2. "This is a character win for us. And there's no one in our locker room that has more character than Casey. When he came in, our room exploded with guys hugging him," said Islanders coach Barry Trotz.

The first goal of Game 7 was going to be a key. Gallagher, who had yet to score in the series against the Leafs, beat Jack Campbell in the second period to put Montreal on the board and the Leafs on their heels. More importantly, his line with Phillip Danault and Jack Evans continued to blanket and blank Matthews and Marner.

Celebration of the day

Trotz namechecked Borrelli's on Hempstead Turnpike during his postgame news conference, saying he saw this video of "everybody jumping around in the overtime."

"It's just tough. I think about how hard our team battled and for it to end on the worst goal of my career and have it happen in Game 7, it's unacceptable. The team counts on me to be better, and I know I can be a lot better than that. So I'm going to get back to work and be better."

Bracket clarity of the day

With Montreal's Game 7 win and its series with Winnipeg now set, the brackets are also set for the NHL's final four teams (the four division winners will be seeded in the semifinals based on their regular-season point totals): 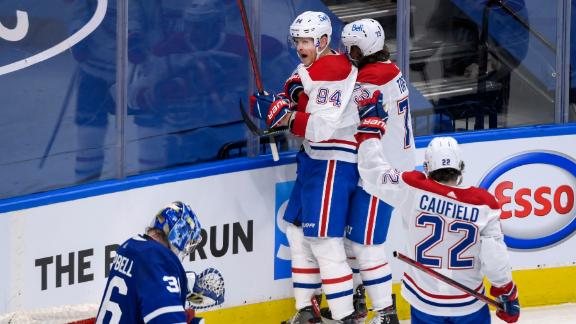 Corey Perry scores off his leg as Canadiens finish off series comeback vs. Leafs
A shot deflects in off Corey Perry's leg to give the Canadiens a 2-0 lead, lifting them to a Game 7 win over Toronto. 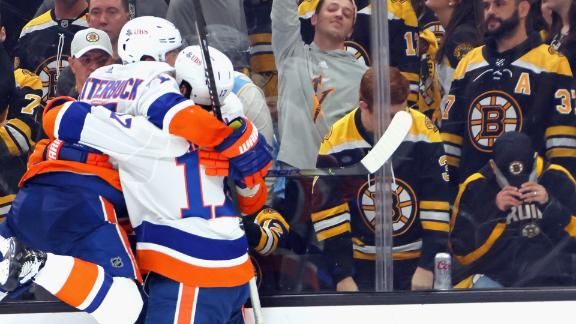