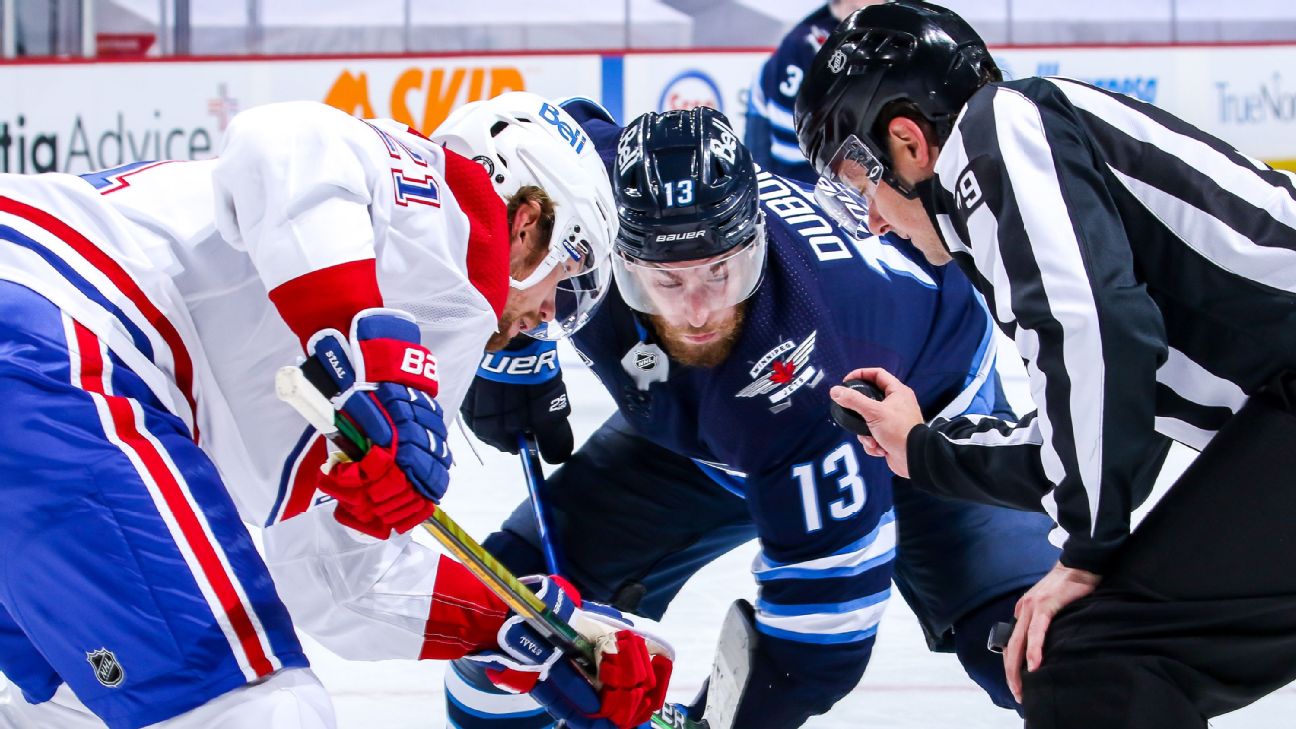 Down but not out, the Vegas Golden Knights return to T-Mobile Arena for a critical Game 3. Can they keep this series interesting, or are the Colorado Avalanche clicking on too many levels right now? Meanwhile, after an unsettling end to Game 1, the Montreal Canadiens and Winnipeg Jets return to the ice, minus Mark Scheifele, who was suspended four games for his brutal hit on Jake Evans, who remains out indefinitely with a concussion.

As for Thursday night? There was no shortage of intensity, with our 19th and 20th overtime games of the playoffs. Might we remind you, we're only in the second round!

Game 1 ended on an unsavory note, with Scheifele charging Evans after he scored an empty-net goal. Evans was stretchered off the ice, and concussed, and Scheifele will be suspended for four games. The Jets were also without veteran center Paul Stastny for Game 1, while one of their more reliable defensemen, Dylan DeMelo, left after just one shift. Missing all three would be a big loss. Winnipeg's mindset, as described by Andrew Copp: "We're not worried about any targets or whatever they're saying in the media. We're worried about going and winning Game 2. It's a big f---ing game for us."

Despite being underdogs in all eight playoff games so far, the Canadiens keep winning. After averaging just two goals per game against the Toronto Maple Leafs, the Habs broke out for five versus Winnipeg, which is especially encouraging considering there were five different goal scorers.

The Golden Knights are going back to their roots: They're once again underdogs. Vegas has scored only three goals on 66 shots on Philipp Grubauer so far this series, with zero of those goals coming from the top line of Mark Stone, Chandler Stephenson and Max Pacioretty. What about Colorado's top line? Nathan MacKinnon, Gabriel Landeskog and Mikko Rantanen are buzzing, with six goals among them. They're also big reasons the power play is clicking, going 4-for-11 in this series. But it's not just them. Asked why the Avs stars seem to be shining so bright, Vegas coach Peter DeBoer quipped: "Maybe because there's seven of them?"

Colorado is now 6-0 in the playoffs. The only teams in the past 30 years to go on a longer streak to begin the postseason: the 1994 New York Rangers (seven) and 2008 Pittsburgh Penguins (seven). Both of those teams went on to the Stanley Cup Final, with the 1994 Rangers winning it all.

Craig Smith reentered the lineup, and immediately scored. The Bruins' second line of Smith, David Krejci and Taylor Hall has developed incredible chemistry in such a short period of time. The trio posted a blistering 73.67% expected goals for percentage at 5-on-5, per Natural Stat Trick. They outshot opponents 10-0 while on the ice together at even strength. The Isles looked like they wouldn't get anything past Tuukka Rask before Mathew Barzal scored the equalizer with less than six minutes remaining in the third. It was Barzal's first goal of the postseason; not his prettiest goal, but one that sent the Nassau Coliseum crowd into the frenzy. Ultimately, Brad Marchand played hero in overtime, on a goal Semyon Varlamov definitely would like back. Full recap

The Canes made a change in net, giving Petr Mrazek the start for the first time this postseason after rookie Alex Nedeljkovic allowed two goals on 15 shots in Game 2. Mrazek was strong in his first action in nearly a month, stopping all 24 shots he faced at 5-on-5 in regulation. He ended up with 35 saves on 37 shots total. The Canes scored twice in a two-minute, 25-second span in the second period to take a 2-0 lead. But the Lightning have been scary good with the man advantage, and Tampa Bay scored a pair of power-play goals to send this to overtime. Jordan Staal scored the overtime winner, on a goal originally credited to Sebastian Aho. Full recap

The Canes' top center was originally credited with the overtime winner, though it was later changed to Jordan Staal. Nonetheless, Aho was fantastic on Thursday, and factored into all three Carolina goals, scoring one of his own and adding two assists.

Marchand scored his second overtime goal this postseason. It was his ninth career game-winning goal in the playoffs, which puts him in third place in franchise history, trailing only Patrice Bergeron (10) and Cam Neely (11).

When the Bruins needed him most, the veteran goalie came up big. He ended up with 28 saves on 29 shots, including some massive stops in overtime.

Odd stat of the day

The veteran was able to rebound, posting 39 saves for a .951 save percentage.

Gesture of the day

Even if you're not a fan of the Boston Bruins, their stars are pretty likable. David Pastrnak is an expert at killing them with kindness: 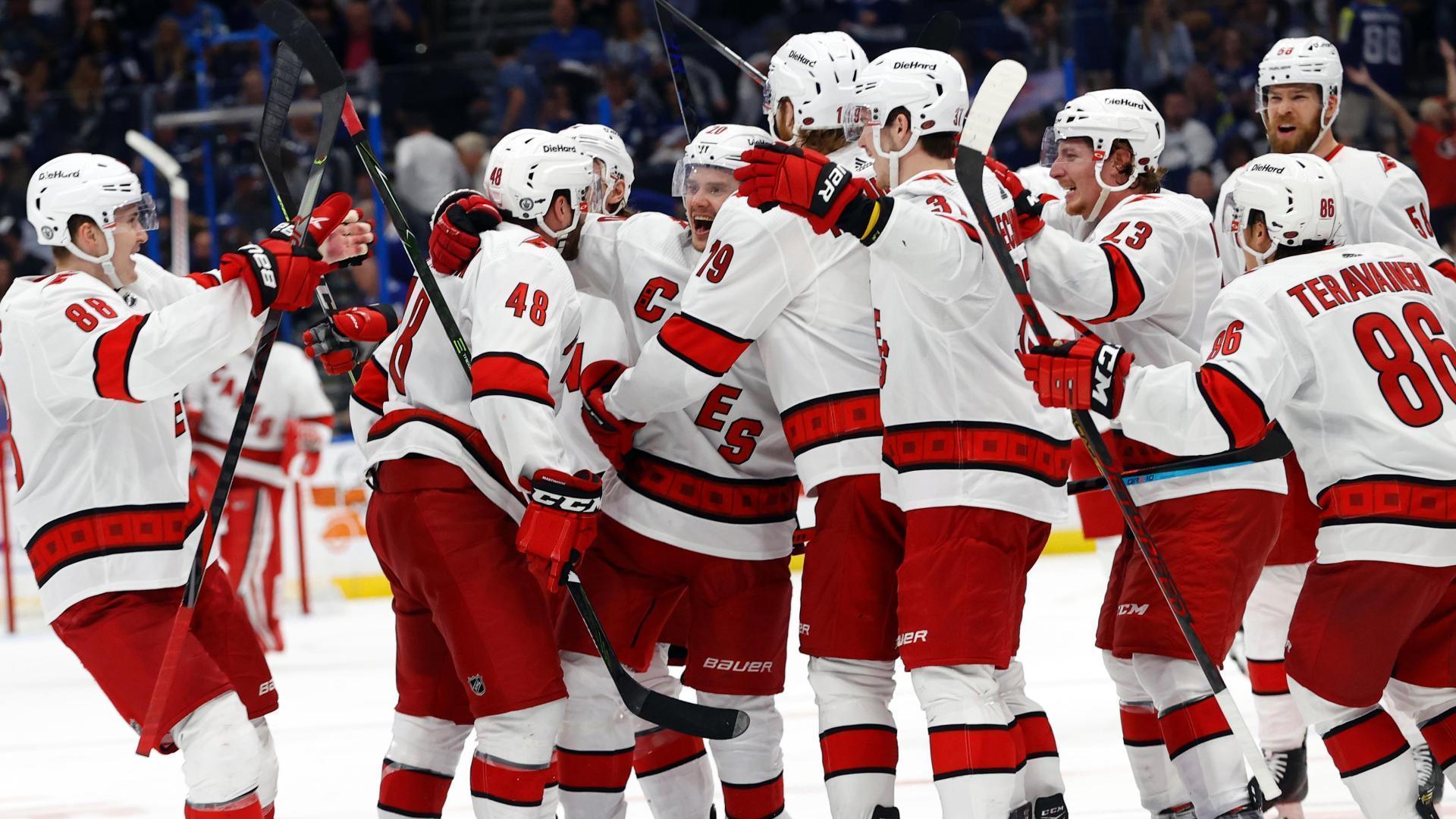 Jordan Staal deflects OT winner to take Game 3 for Hurricanes
The Hurricanes trim their series deficit to 2-1 as Jordan Staal wins it in overtime. 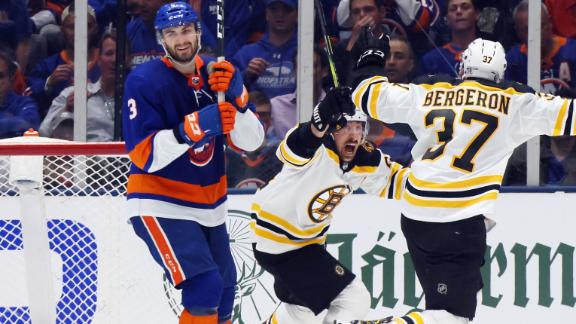