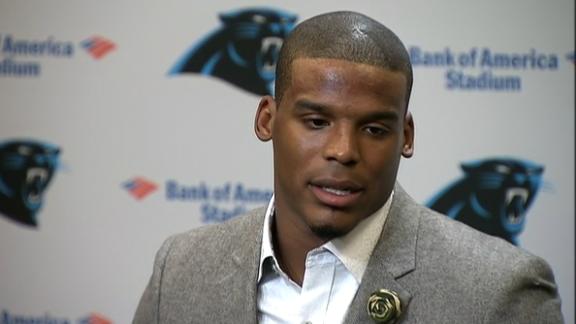 CHARLOTTE, N.C. -- Panthers quarterback Cam Newton tore down a Packers banner before his team's37-29 home victorySunday and said afterward that it sometimes felt like a hostile environment because there were so many Green Bay fans at Bank of America Stadium.

The banner was near the entrance where Newton and the Panthers run onto the field. It referred to the stadium being Packers' country.

"We take pride in having an edge in playing in Bank of America Stadium, of playing in front of the Carolinas each and every week," Newton said. "I feel it's my due diligence to protect this house. It wasn't just about tearing down a sign. It was respect."

According to a report in the Fayetteville Observer, the owner of the banner took issue with Newton's actions and told stadium police it was stolen. He said he paid $500 to have the banner made, and he wants it back.

"I was just shocked, shocked," the fan, Mike Dobs of Fayetteville, told the Observer of his reaction when Newton grabbed the banner from him.

Dobs added that a Panthers employee said the team would make it up to him, according to the report.

"It's still a side story as far as I'm concerned," Panthers coach Ron Rivera said Monday. "It's being taken care of. Cam's been talked to and we are reaching out to the other party and that's where we are."

Green Bay fans typically travel well, and there was a large contingent of fans around the lower bowl cheering on the Packers as they warmed up before Sunday's game.

"We played in Green Bay last year, and I didn't see no 'This is Panthers Country' sign in their stadium," Newton said. "I was passing. The sign was dangling. Either somebody was going to take it off, or I take it off.

"It's no disrespect to nobody. It's just more of a respect to the stadium. We all know gangs, we all know territories, we all know businesses ... you're not about to sit up here and sell a Whopper at a McDonald's."

With the win, the Panthers improved to 8-0 on the season, including 5-0 at home, which prompted safetyRoman Harperto take to Twitter.

"It just doesn't match," Newton reiterated of the Packers sign at Carolina's stadium. "No disrespect to any Green Bay Packer. It's just a respect thing."

Newton on tearing down banner: 'Just a respect thing'
Cam Newton talks about why he tore down a Packers sign before Carolina's win over Green Bay at home.