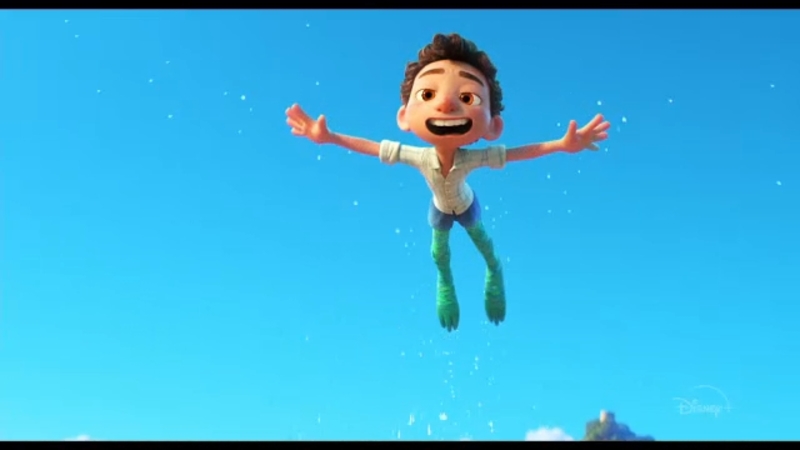 The next Pixar film from Disney is now streaming, and "Luca" is the tale of a teenage boy coming of age on the Italian Riviera during a magical summer of adventure in a seaside town.

It's a universal story set in a very specific time and place more than half a century ago, a beautiful seaside town during the 1950s and 60s when life is pretty mellow -- until a guy named Luca arrives from his home under the surface of the ocean.

The next Pixar film from Disney is now streaming, and "Luca" is the tale of a teenage boy coming of age on the Italian Riviera during a magical summer of adventure in a seaside tow

Luca is like any other 13-year-old boy, except he is also a sea monster.

"It was made by adults," said Jacob Tremblay, who provides the voice of Luca. "But they did such an amazing job in capturing that true, innocent adventures that kids go on."

The new Disney and Pixar film "Luca" is a coming-of-age animated adventure about friendship and finding your true self.

The young actor, so effective as Brie Larson's son in "Room," plays opposite Jack Dylan Grazer as his friend, Arturo.

"To say, 'I was in a Pixar movie,' and that adds to the history of Pixar, is just so awe-striking," Grazer said. "It's so great."

The two boys bond and set out to win a bicycle race, which wouldn't be that unusual except for the fact that they don't have human legs.

But so long as they stay dry, they can appear human, and they team up with a young girl named Guilia -- given life by newcomer Emma Berman.

Jim Gaffigan and Maya Rudolph play Luca's parents, who disapprove of his human adventures on dry land, although they end up following him into town.

The rapport is so good, it's surprising to learn they recorded their parts separately, alone, at home during the pandemic.

"I wish we were doing it at the same time," Rudolph said. "I think that would have made it even more fun, but I just kind of imagined him in the room."

For his part, Gaffigan was faced with challenges working from home.

"The impending fear of the noise from my five children, I was always afraid was going to enter into the recording," he said.

Underdogs have to swim together! Meet Luca and his team in this new clip from "Luca," streaming June 18 only on Disney+.

It's hard to believe this movie was made under such trying circumstances, because all their hard work results in a lot of fun for audiences.

It is also a chance to look back to childhood memories and ahead to better times.

"Light hearted" are the words that come to mind about "Luca," a warm look back to one director Enrico Casarosa's childhood in Genoa.

"The pride of our beautiful language, the food, you know, a true pleasure," he said.

Casarosa has worked on such Pixar films as "Coco" and "Cars 2," but his experience didn't prepare him for making "Luca" in the middle of a pandemic.

"It was an ordeal, to put it lightly," Grazer said. "My mom and I had to set up a sound recording studio in her closet, which is like 5x6."

"We didn't know what we were in for," she said. "It happened right as we were starting shot production, and it was incredible to see the crew rally. Everybody rolled up their sleeves, got scrappy. We appreciated our actors."

The actors recording solo came to feel a camaraderie with the others that made its way into the finished film.

"That was the important part they were there to play," Casarosa said. "They were happy to play, so even from a closet, we were able to retain a lot of that."