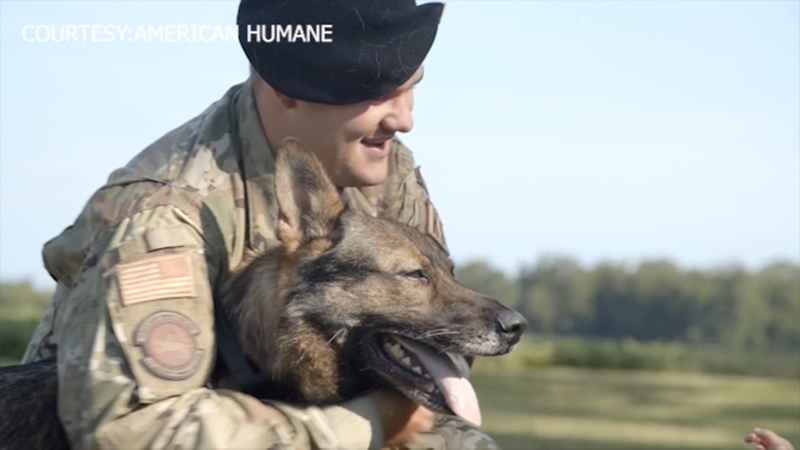 GOLDSBORO, N.C. (WTVD) -- For Air Force Staff Sergeant Kyle Johnson, his bond with his 9-year-old German Shepherd is a special one.

"He never leaves my side no matter where we go," Johnson said.

He's not just Chickel's owner, but also his former partner. In January 2020, Johnson was stationed in South Korea, leaving behind his wife and two children.

Leaving his family was a hard transition, but then he met Chickel.

"It just seemed like a perfect match. He knew every time I was depressed or didn't want to talk or anything, he would jump on the bed and bring his toy over to cheer me up," Johnson said.

Later in the year, Johnson was reassigned to Seymour Johnson Air Force Base in Goldsboro as a dog handler, but knew he couldn't leave his partner behind.

"I knew wanted Chickel before I even left so we started with his dispo process which is his retirement process and that takes some time and I had left before that had come to an end," Johnson said.

Getting Chickel home was going to be expensive, but American Humane helped make the reunion worth the eight-month wait.

"As soon as I said his name, he just rushed over and it was just like we were back in our room back in Korea," Johnson said. "At that moment I wanted to thank him for everything that he's done and now I get make sure that he gets spoiled this time and I'm there for him when he's lonely in return for what he did for me."