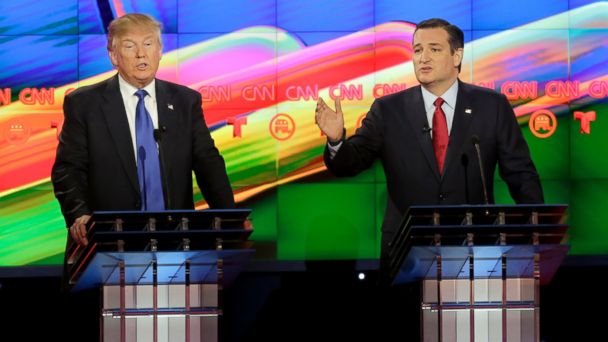 Trump is under fire for jabs at Heidi Cruz, as the rivals engage in an increasingly bitter, personal battle for the GOP presidential nomination. Hostilities reached a new high Friday when Cruz accused Trump and "his henchmen" of stoking false rumors that he'd cheated on his wife.

Trump's history of sexist comments, from his "Apprentice" television program to racy interviews with radio host Howard Stern, have long been seen by Republicans as a potential vulnerability, especially in a general election match-up with Clinton, who would be the country's first female president.

The issue took off in the first GOP debate when Fox News' Megyn Kelly asked Trump about calling women "fat pig," ''dog" and other names. Her question sparked a continuing quarrel between Trump and the network.

Trump also faced a backlash after he was quoted in a "Rolling Stone" profile insulting businesswoman Carly Fiorina, who endorsed Cruz after she dropped out of the 2016 Republican race.

"Look at that face!" Trump was quoted saying. "Would anyone vote for that? Can you imagine that, the face of our next president?!"

The issue reignited Wednesday after an anti-Trump super PAC released an ad featuring a risque photo of his wife, Melania, a former model, taken in a GQ photo shoot.

"Meet Melania Trump. Your Next First Lady. Or, you could support Ted Cruz on Tuesday," it read. Trump responded by falsely accusing Cruz of running the ad and warning, "Be careful, Lyin' Ted, or I will spill the beans on your wife!" Cruz's wife is a former Goldman Sachs investment manager and White House aide, who served as economic policy adviser to President George W. Bush.

On Wednesday night, Trump escalated things when he re-tweeted side-by-side images of Cruz's wife, with an unflattering grimace, and Melania in a gauzy, glamorous pose. "No need to 'spill the beans'" read the caption. "The images are worth a thousand words."

At an event Thursday in Wisconsin, Cruz responded by calling Trump "a sniveling coward" who has a problem with women - particularly "strong women."

Cruz continued to dig in Friday, painting Trump's comments as part of a larger pattern of misogyny.

Though Trump continues to outdistance Cruz in the delegates that will decide the GOP nomination, recent polls have shown the billionaire's favorability on the decline, particularly among women.

In a recent NBC/Wall Street Journal poll, 70 percent of women had a negative opinion of Trump. Nearly three quarters of women overall, and 39 percent of Republican women, had an unfavorable view of him in a recent CNN poll.

"He already had a gender gap prior to all this," said Republican pollster David Winston. "The potential for that to be bigger now looms on the horizon."

Katie Packer, a former top aide to 2012 GOP nominee Mitt Romney, and the founder of the anti-Trump Our Principles PAC, said all this spells trouble for the general election.

Packer, whose group was behind a recent ad that features women of various ages reading comments Trump has made about women, said Clinton remains vulnerable among many women.

However, she said, "If he loses women by 10 points more than Mitt Romney, it's not a question of whether or not he loses, it's a matter of who does he sweep out with him."

Indeed, Trump's latest tweeting struck a sour chord with some female suburban voters considered the key to victory in battleground states such as Colorado

"He makes all kinds of derogatory statements against women, and I just don't like to hear that," said Ilse Lucas, 70, a retired teacher's aide who doesn't consider herself a Democrat or Republican. Shopping in a suburb west of Denver, Lucas said Trump's comments could drive independent voters like her to Clinton.

Cruz, meanwhile, worked to send a distinctly different signal Friday on a campaign trip ahead of Wisconsin's April 5 primary.

At an Oshkosh manufacturing plant, Cruz was introduced by his wife, who praised him as her "best friend and partner." After the introduction, he gave her a long hug as the audience cheered.

"In the last few days, Donald Trump has taken to attacking Heidi," Cruz told the group, sparking boos that echoed through the warehouse.

"I'll tell you something," Cruz said. "I think Heidi is the most beautiful, brilliant, amazing, fantastic, loving mom, an incredible wife and she's my best friend in the whole world and I love you with all of my heart."

It was a message that, for some voters, couldn't cover up the nasty fight between the two candidates.

"I don't know what to say except that I'm disappointed in both of them," said Jennifer Churchfield, a 52-year-old Republican from a suburb south of Denver. "The conversation needs to be about the economy, jobs, education, foreign policy. You know, things that matter.

"This is a non-debate," she added. "What are they doing?"