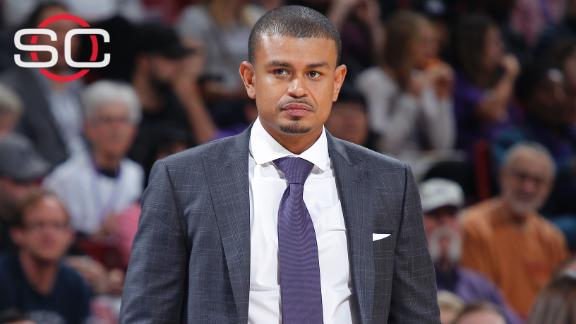 The Phoenix Suns are retaining Earl Watson as their head coach.

Watson, who initially was named interim coach after Jeff Hornacek was fired on Feb. 1, has agreed to a three-year deal with the Suns, sources told ESPN's Jeff Goodman.

The Suns went 9-24 under Watson, finishing the season with the second-worst record in franchise history (23-59). But Watson has said he was told he would not be judged on wins and losses -- because of the injury-depleted roster he inherited -- but on other factors, including improving the team's attitude.

In a news release Tuesday announcing the decision to keep Watson, Phoenix general manager Ryan McDonough praised the young coach's "natural leadership qualities and ability to connect with and motivate" the Suns players.

"We are excited to see what he can do with a healthy roster after having a full offseason to prepare," McDonough said.

Sources told ESPN's Brian Windhorst that Suns players strongly supported Watson in exit meetings with management and it had a positive influence on the hiring process.

"At some point in the season, we had the mindset that we were accepting losing," Devin Booker told reporters after the season. "Once Coach Earl stepped in, we didn't accept losing anymore. We were fighting in games, even when we were down 15, 20 late. We fought back to almost win a lot of games."

The 36-year-old Watson, who played in the NBA for 13 seasons, is the league's youngest coach. Before this season, his only coaching experience was as an assistant for the San Antonio Spurs' Development League team in Austin, Texas, in 2014-15.

He was hired as a Suns assistant for player development last summer and moved up to a bench coach position when Hornacek's top two assistants were fired in early January.

Before the Suns' final game of the season, Watson talked about what the organization had expected of him after he was named interim coach. He said he was told to rehabilitate Markieff Morris' image and attitude to make him more attractive to other teams. The troublesome forward was sent to Washington at the trade deadline in a deal that landed Phoenix the Wizards' first-round draft pick.

Watson also said he was expected to develop the young players on the team, particularly Bookerand Alex Len, and improve the team's attitude.

"There was a lot going on but I think our staff executed everything that was asked of us to do," Watson said, "and we mixed in a little winning also."

After a 0-9 start under Watson, the Suns went 9-15, winning three of their final four games.

ESPN's Chris Broussard and Marc Stein and the Associated Press contributed to this report.