Wee-lief! Dogs get airport bathrooms of their own 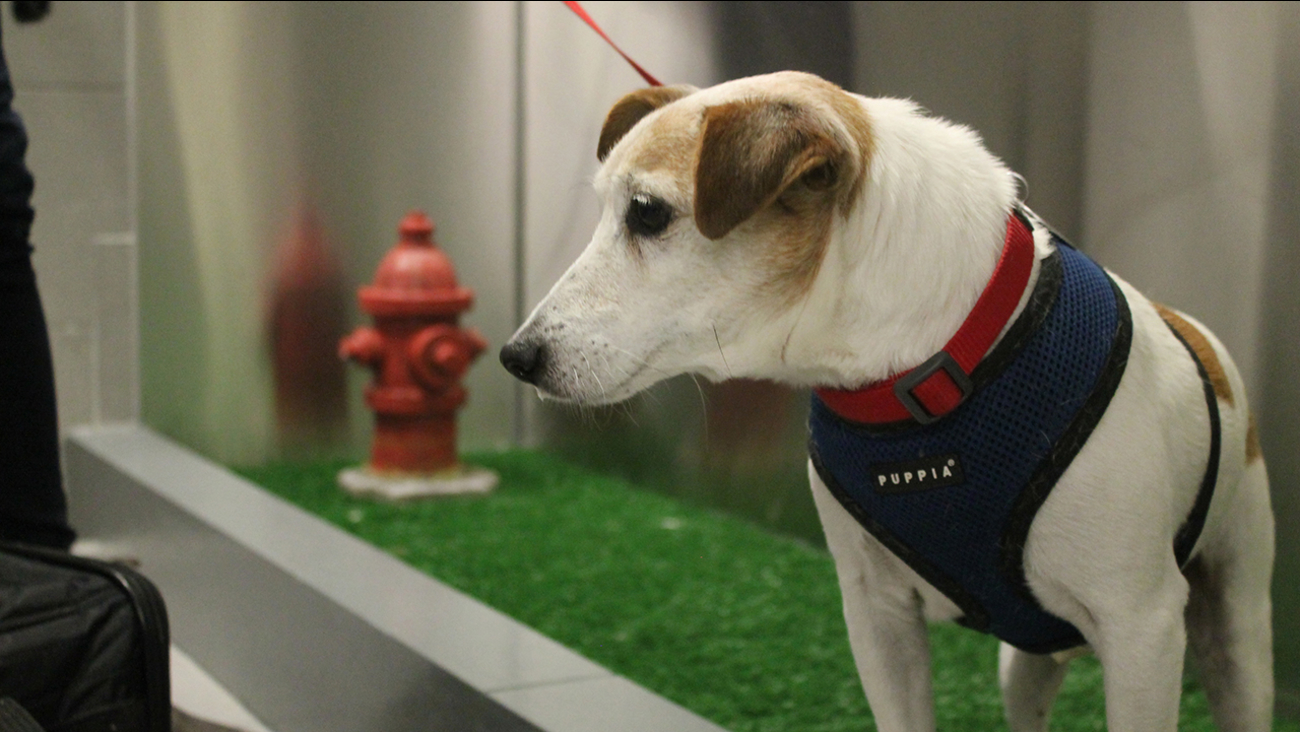 A new "pet relief" area has opened in the international air terminal at JFK to help passengers taking their dogs on a long flight. (AP Photo/William Mathis)

NEW YORK -- Little Simba couldn't wait to check it out.

The toy poodle was among the first to try a special bathroom just for animals at New York's John F. Kennedy International Airport, among a growing number of "pet relief facilities" being installed at major air hubs across the nation.

"There's a fire hydrant in there!" Simba's owner, Heidi Liddell, announced as she opened the pawprint-marked door between the men's and women's rooms.

It didn't take long for the dog to sidle up to the little red hydrant atop a patch of artificial turf and do her business. A dispenser of plastic doggie bags and a hose was provided for the owners to clean the area up for the next pet.

The 70-square-foot room, at JFK's sprawling Terminal 4, allows dogs and other animals to relieve themselves without needing to exit the building to find a place to go outside - a step that requires an annoying second trip through the security line.

"We had seen an increase of passengers traveling with pets and we decided to do it sooner rather than later," said Susana Cunha, vice president of the management company that operates the terminal.

Guide and service dogs, emotional support animals and other pets traveling with passengers are all welcome to use the facilities.

A federal regulation will require that all airports that service over 10,000 passengers per year install a pet relief area in every terminal by this August. Airports that already have them include Dulles International outside Washington D.C., Chicago's O'Hare and Seattle-Tacoma International.

"With long flights and short transit time frames, passengers would not have enough time with plane changes to come back through security," said Karen Greis, a consumer services manager for the Guide Dog Foundation, a nonprofit that trains service dogs and participated in the design of the new facility. "Having relief areas inside the terminal is a stress reliever for the handlers."

That was certainly the case for Taylor Robbins, who had already missed one flight from JFK to Atlanta and was unsure if she had enough time to go back outside to find a place to walk her terrier John John.

"It's really clean, it gets the job done and he seemed to understand he could use it," she said after exiting the doggie restroom. "Without this he would have had to hold it in."

Other pet owners were encouraged by the convenience.

Mark Shadowens, from Lake Tahoe, California, peered into the new facility with a smile. He said he and his wife Helen would love to travel with their Jack Russell terrier, Bella, but fears not being able to find a place to let her go to the bathroom.

"We travel with our pet a lot, just not on airlines," Shadowens said. "We like to go see the world and I think we would bring her if there were places like this."