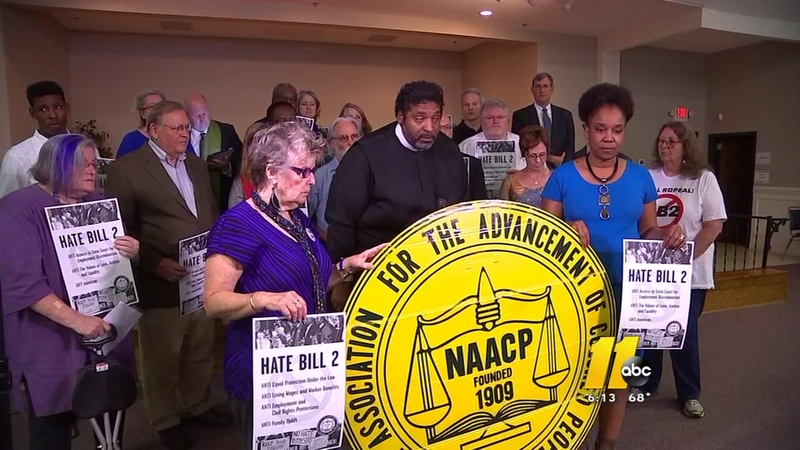 RALEIGH (WTVD) -- The NAACP is readying for Round 2 and planning another massive rally in protest of House Bill 2. NC NAACP President the Rev. William Barber announced Tuesday there will be a Moral Monday rally on May 16.

Barber said he has been in contact with the civil-rights organization's national leaders about the hotly debated law.

"(This law) is the worst blend of homophobia, classism, and racism we've seen in the country," Barber said.

Last Monday, a thousand people swarmed Bicentennial Mall for a Moral Monday rally. Demonstrators walked inside the House chamber and started shouting at state lawmakers when they reconvened for the short session.

A total of 54 people were arrested. One man had to be carried out by officers after he refused to leave.

The Rev. Deborah Cayer, a Durham pastor, is one person who was arrested after protesting HB2.

"Bullying is a terrible way to govern. This kind of hatred quickly spreads and threatens civil rights," Cayer said.

Barber thinks the law is discriminatory and contends its supporters are manipulating the public to believe it's about protection.

"If legislature was really concerned about children, they would fully fund public education and support teachers," Barber said.

Gov. Pat McCrory is fiercely standing behind the law.

He went on a national syndicated radio talk show this morning and in a candid moment said he knew his position could cost him the office.

"I don't want to be the bathroom police," McCrory said on the "The Big Show with John Boy and Billy." "I know business people who agree with me 100 percent, but they're afraid."

HB2 requires people to use bathrooms in schools and government buildings that match the gender on their birth certificates.

A new statewide poll by Red America, Blue America found that 50 percent of registered voters disapprove of HB2. 35 percent are for it and 16 percent are undecided.

House Democrats have filed a bill to repeal the law.

The state is being sued by the ACLU. The nonprofit tells ABC11 it should learn of a hearing date by the end of the month.