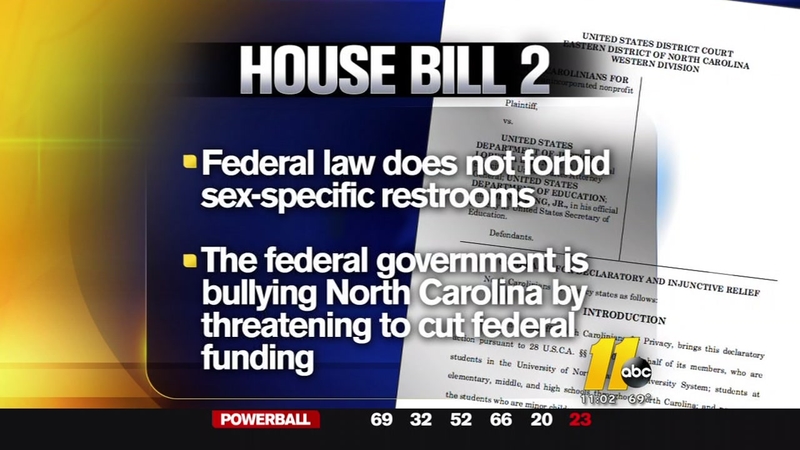 RALEIGH (WTVD) -- Another federal lawsuit has been filed over House Bill 2. Supporters of the law led by lawyers from a Christian conservative group from Arizona filed the lawsuit on behalf of North Carolina parents and students.

The suit accuses the U.S. Department of Justice and Education of holding federal education money hostage.

The group, North Carolinians for Privacy, argues that federal law does not forbid sex-specific restrooms and that the federal government is bullying North Carolina by threatening to cut federal funding.

Outside the Executive Mansion on Wednesday evening, they couldn't disagree more.

For the fifth straight week, the so-called Air Horn Orchestra sounded off outside the governor's residence in Raleigh. Anti-HB2 demonstrators loudly made their case against the controversial law.

Air Horn Orchestra at it again, honking against #HB2 outside the Gov's mansion. It's the 5th straight week. #abc11 pic.twitter.com/ikV97Lkazs

Alyssa Putt and Millie Rosen teach sixth-grade English and math in southeast Durham. They joined the orchestra Wednesday, angered about what they call a hate bill. They're concerned about the potential cost to state classrooms.

"And on top of that, HB2 took away municipalities' abilities to raise the minimum wage which would help our kids," Putt added.

Meantime, the state's largest business advocacy group, The North Carolina Chamber of Commerce unveiled its suggestions to resolve the dispute. The chamber is advising lawmakers to clarify state discrimination law in employment and public accommodations, such as restrooms, to match protections in federal law.

It goes on to suggest state courts should again be allowed to hear discrimination lawsuits. And private businesses should set their own restroom rules, subject to state and federal law.

HB2 opponents are criticizing the Chamber of Commerce for not calling for a full repeal.

For its part, the chamber says it has a "diverse membership" which is reflected in its HB2 recommendations.

"It's a very sensitive issue between privacy and equality," McCrory told CNN. "And all we're asking for is the courts to give clarification on what's right, and we'll follow the law."