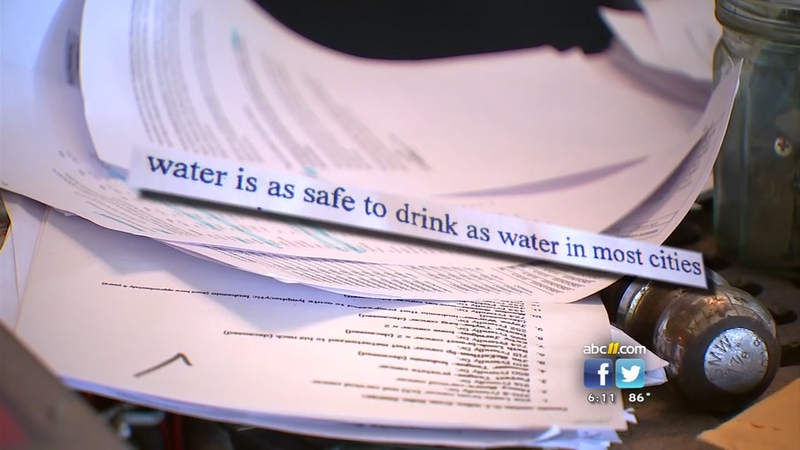 RALEIGH (WTVD) -- The North Carolina Democratic Party has filed an open records request to find out whether Gov. Pat McCrory's administration urged the Department of Health and Human Services to change its position on the safety of water in certain wells around Duke Energy's coal ash pits.

The Party seized on testimony from court depositions of key employees at DHHS suggesting both McCrory's communications director, Josh Ellis, and officials from Duke Energy were involved in the decision to change more than a hundred "do not drink" advisories to "do drink" recommendations.

"We deserve a better understanding of the actions the governor's office has taken so far," said Patsy Keever, Chairwoman of the State Democratic Party. "Recent depositions have indicated that the McCrory administration lifted 'do not drink' orders for families living on well water near Duke Energy coal ash ponds despite serious reservations from top officials at the Department of Health and Human Services and the Department of Environmental Quality."

Keever was referring to testimony from state Epidemiologist Megan Davies and Acting State Toxicologist Mina Shehee that showed multiple top scientists at the health agency disagreeing with the decision.

The testimony directly contradicts statements Health Director Randall Williams made to the I-Team in April.

Williams told ABC11 there were no political motivations for the decision to lift the "do not drink" advisory and that it was reached by consensus; another major disconnect between Williams' statements to us and his employees' statements under oath.

"The testimony directly contradicts statements by McCrory's state health director Randall Williams," Keever pointed out, "who said that Duke Energy had not pushed to lift the 'do not drink' orders for families living on well water near coal ash ponds."

The state's sharp reversal and confusion it has wrought has left homeowners skeptical and angry.

"We all want answers," said Jennifer Worrell, a homeowner with contaminated well water near Duke's former coal plant in Goldsboro.

Critics of the McCrory administration see smoke and have started looking for fire. Williams was appointed by McCrory; McCrory was employed by Duke Energy; Duke Energy could benefit greatly from a change in the state's position.

"We would like to hear the truth from Governor McCrory," Keever said. "Serious questions have been raised about who McCrory is working for."

ABC11 has a standing request for a follow-up interview with Health Director Williams and never heard back from the Governor's office about this story.