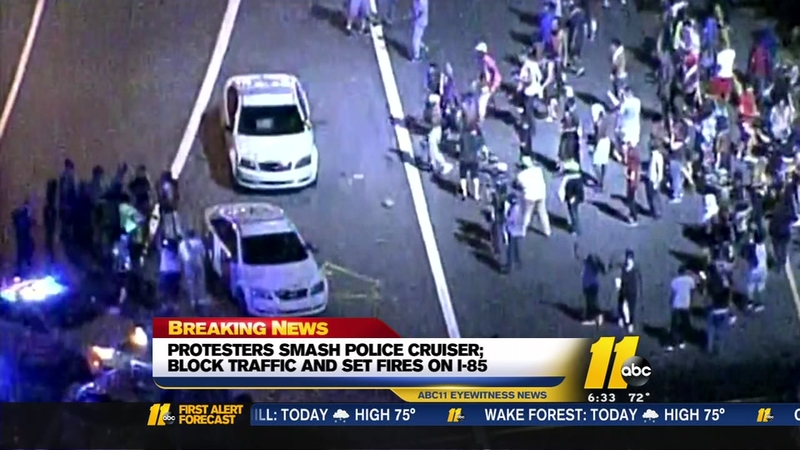 CHARLOTTE (WTVD) -- Protesters in Charlotte clashed with police in riot gear in a tense scene Tuesday evening into Wednesday morning after police shot and killed a person carrying a gun at a Charlotte apartment complex.

Seven Charlotte-Mecklenburg police officers were taken to the hospital along with one civilian. Many more reportedly had minor injuries as protesters threw numerous objects, including rocks and water bottles, at police officers. One officer was hit in the face with a rock.

The protests spilled onto Interstate 85, blocking the highway for hours.

Hundreds of protesters blocked the streets.

Protesters targeted police cruisers. One damaged vehicle was towed away.

Charlotte Mayor Jennifer Roberts tweeted late Tuesday evening: "I will continue to work with our manager & Chief on officer involved shooting. We are reaching out to community to ask for calm.

The community deserves answers and full investigation will ensue. Will be reaching out to community leaders to work together"

At one point, protesters began a chant of "black lives matter." The man fatally shot by police was black. The officer involved in the shooting is also black.

The officer was identified as Brentley Vinson. As is standard procedure with any officer-involved shooting, Vinson was placed on paid administrative leave. Vinson has been employed with the CMPD since July 21, 2014, and is assigned to the Metro Division.

The man fatally shot was identified as Keith Lamont Scott. His family has been notified of his death.

Police initially went to the apartment complex on the city's northeast side looking for a suspect with an outstanding warrant.

Police said Scott was not the suspect officers were searching for, but had exited from a vehicle with a firearm and the officers believed he posed an imminent deadly threat.

Scott's family quickly challenged the police account of the fatal shooting, saying he was not armed and that Scott, a father of seven, was holding a book and waiting for his son to be dropped off from school.

Detectives say they recovered the firearm they believe Scott had been holding at the time of the shooting at the scene.

Scott exited the car with a gun, and then got back in, police said. When officers approached the car, he got out of the car with the gun again.

At that point, officers considered him a threat and fired their weapons. Police Chief Kerr Putney told reporters at the scene that at least one officer shot the person.

When hundreds of protesters gathered to demonstrate the shooting Tuesday night, police blocked access to the area, which is about a mile from the campus of the University of North Carolina at Charlotte.

Early Wednesday morning, the unrest raged on as a group of people blocked traffic on I-85. A live video feed from a WSOC-TV helicopter hovering above the scene appeared to show people removing items from the back of trucks on the highway.

The scene on I-85 appeared to devolve into looting, with people pulling items from tractor-trailers and burning boxes.

A group of people attempted to break in to a Walmart, WSOC-TV reported, and scattered when police arrived at the scene.