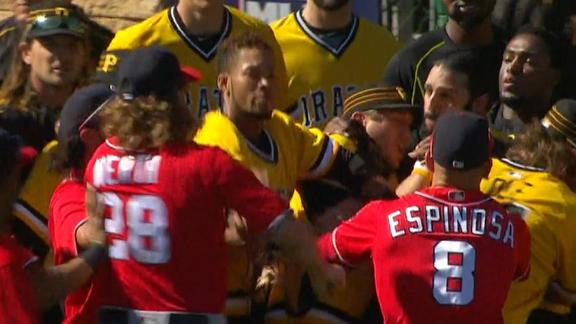 PITTSBURGH -- A series of plays during Sunday's game led to a benches-clearing scuffle in theWashington Nationals' 10-7 win over thePittsburgh Pirates.

According to MASN Sports, Nationals outfielder Bryce Harper appeared to injure his left hand in the third inning during a slide into third base. Pirates third baseman Jung Ho Kang tried to deke Harper, pretending he had the ball and leading to an awkward slide by Harper.

The Nats star appeared to be angered by the play, and Washington manager Dusty Baker was seen yelling into the Pirates dugout.

In the bottom of that inning, benches cleared when Nationals pitcher A.J. Cole threw a wild pitch behind the back of Kang.

Cole was immediately tossed by the home plate umpire Jordan Baker. Both benches and bullpens emptied, and players were involved in an ensuing scuffle near the mound.

In addition to Cole, Pirates left fielderSean Rodriguez was tossed after engaging in a shouting match across the diamond with Nationals left fielderJayson Werth.

Harper left the game and was replaced by Chris Heisey in right field for the bottom of the third.