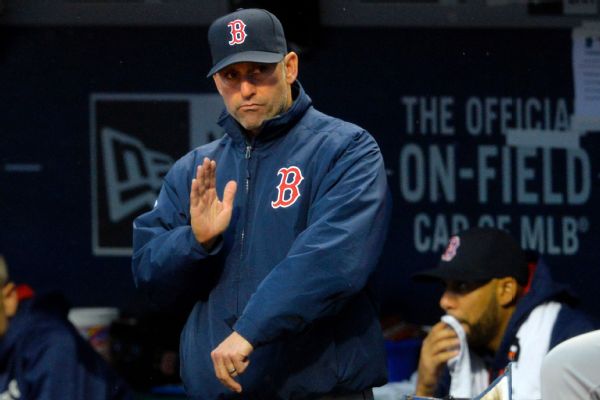 The Arizona Diamondbacks will name Torey Lovullo as their new manager, the team announced.

Lovullo is expected to be introduced at a news conference Monday.The deal will be for three years, according to a source.

Word of the Diamondbacks' intention to hire Lovullo is "not something that's unanticipated," according to a major league source, considering Lovullo's longstanding relationship with new Arizona general manager Mike Hazen. Lovullo and Hazen worked together with both the Red Sox and the Indians.

Lovullo spent the past four seasons as the Red Sox bench coach and served a 49-game stint as Boston's interim manager during the 2015 season when John Farrell left the team to undergo treatment for lymphoma.

Lovullo replaces Chip Hale, who was fired after two seasons. Hazen took over from Dave Stewart, who also was dismissed after two years.

The Red Sox have a list of internal and external candidates to replace Lovullo, although their preference is to stay internal. Bullpen coach Dana LeVangie served as bench coach late in the 2015 season when Lovullo filled in for Farrell.

Other potential in-house candidates include first-base coach Ruben Amaro Jr. and third-base coach Brian Butterfield, although Butterfield is well-regarded in his current position for his work as an infield instructor. Former All-Star catcher Jason Varitek, a special assistant for the past few seasons, also could be considered if he's ready to return to the field as a coach.

Student loan relief to be extended through September
Fauci lays out Biden's support for WHO after Trump criticism
Biden pushes to reopen schools within 100 days
Aldi, Trader Joe's and others will pay workers to get a vaccine
Show More
Raleigh theater owner opens space for private showings
Man shot while driving on Highway 64 in Nash County
HBCU pride in Raleigh over Kamala Harris' rise to the vice-presidency
New CDC director extends eviction moratorium due to COVID-19
DACA recipient speaks on Biden administration's push to preserve program
More TOP STORIES News