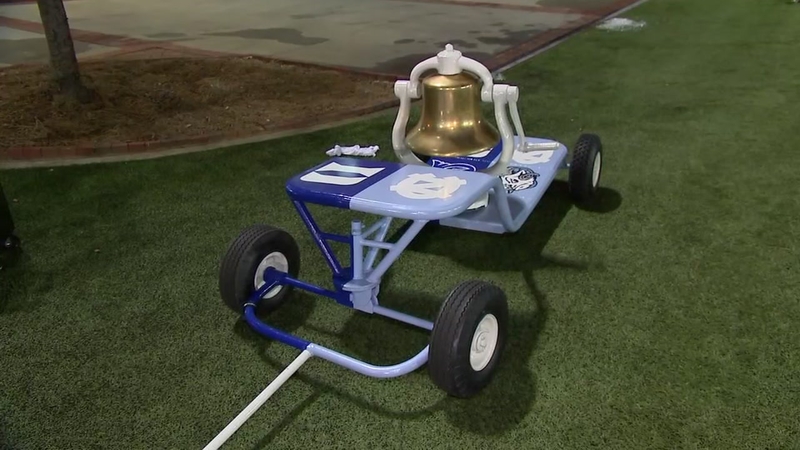 CHAPEL HILL, NC (WTVD) -- UNC Athletic Director Bubba Cunningham was hearing it from every corner of the Carolina fanbase earlier this week -- any and all variations of "What are you thinking??? Noooooo!!! This is ridiculous!"

The reason - the new paint job on the Victory Bell.

Agreed upon by both schools, the idea was to more clearly define the trophy and the two participants, and oh by the way, end the recent tradition of the victors spray painting the trophy on the field immediately afterwards.

Since 1948 - before the ACC had even been formed - the winner of the UNC-Duke football game has been awarded the Victory Bell. Salvaged from an old railroad train, it's one of the more unique rivalry trophies in the country. Every postgame between the two schools features players from the winning team joyously towing, riding on and most of all, clanging the bell in celebration.

The winner of the Bell has long painted it in their school's color of blue, but the instantaneous, on field spray painting is a relatively recent tradition. The first occurrence was in 2004 -- when UNC seized the bell back after Duke had ended a 12-year drought with a win in 2003.

Carolina owned the Victory Bell for a spell again until 2012, when Jamison Crowder's thrilling 4th down, flipping TD catch snatched it back for the Blue Devils. Duke followed with another victory the next year.

That brings us to November 20th of 2014 and Wallace Wade Stadium. Larry Fedora's Heels hammered the Devils that day, 45-20. What followed was spray painting. One problem -- it wasn't just the Bell that got tagged. Duke's practice field, practice facility and the visiting locker room were also given a Tar Heel blue dusting to the tune of $27,170.44 in damages per Duke. After some testy back and forth about the bill, Fedora and Cunningham wound up writing personal checks to cover the bill. It was like an excerpt from a Motley Crue biography.

The new 'shared' bell was supposed to prevent any further shenanigans of this sort. But after two days of howling protest from fans and players, Cunningham relented. He tweeted yesterday afternoon:

That was accompanied by a statement on UNC's athletic website

"After talking to our football team and hearing from many of our fans, we have decided to maintain the tradition of the winning team painting the stand for the Victory Bell in its school colors. We are glad to see the passion and support for the game and the Victory Bell and await an exciting and entertaining contest tomorrow evening. We will continue to share with people the history of the rivalry and the Victory Bell, while preserving the winning team's enthusiasm for displaying their triumphant shade of blue."

The official stance being changed is good because at least one Tar Heel, Nazair Jones, was planning some good-spirited civil disobedience: