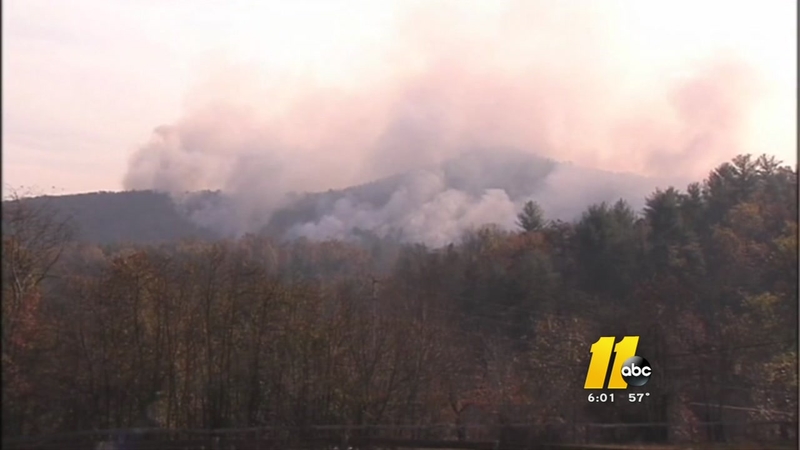 NC wildfires lead to air quality alerts throughout the state

RALEIGH (WTVD) -- The raging wildfires have already torched 44,000 acres of forest, but the smoke cloud covers an area that spans a number of states.

Scientists at North Carolina's Department Environmental Quality Air Division are warning residents in the Triangle of an increased presence of that smoke cloud, especially as winds change from the west which could push the cloud east over our area.

They add that what's dangerous about the smoke is what the eye can't see.

The latest at 6 p.m. on the NC wildfires.

"We're talking about stuff that's 1/100th or even less than that of a human hair," DEQ specialist Elliot Tardiff explained to ABC11. "They are really, really tiny. When you get a lot of those in the air and you breathe those in, that's where health problems can happen."

Those particles are mixture of very small solids and liquids suspended in air, and they typically are caused by forest fires.

This image stitched from two photos shows the smoke from the fires and the eastward forecast.

Some of the health problems that could result from exposure to particle pollution are burning eyes, runny nose, and illnesses such as bronchitis. The smoke can certainly aggravate some chronic conditions such as asthma and emphysema.

"The science is the same as wood burning in a bonfire, except these wildfires are so much bigger than that," Tardiff added.

The DEQ posts at least two air quality forecasts a day -- one in the morning and one in the afternoon. Much of the Triangle has been under a Code Yellow alert, which says "unusually sensitive people should consider limiting prolonged or heavy exertion outdoors.

Heading toward Charlotte, the alerts turn to Code Orange (children, active people. older adults, and those with heart or lung disease should limit prolonged or heavy exertion outdoors).

Charlotte's skyline is obscured by haze from the fires.

West of Charlotte and toward the mountains, however, the alert is raised to Code Red, a warning to everyone to avoid strenuous work or exercise outside.

The Division of Air Quality does offer several ways to protect your health, including but not limited to:

Changing winds in western NC could affect air quality in the Triangle.