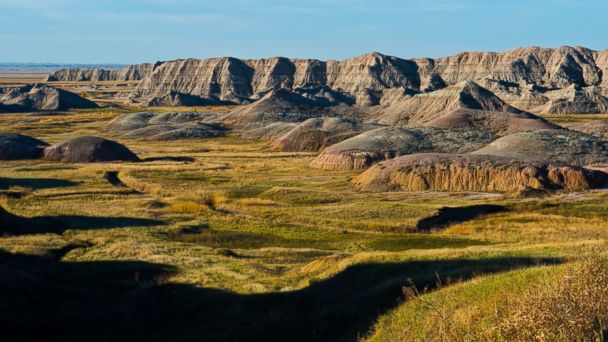 ABCNews
By MERIDITH MCGRAW
A series of tweets about climate change from the Badlands National Park Twitter account were deleted Tuesday.

"The pre-industrial concentration of carbon dioxide in the atmosphere was 280 parts per million (ppm). As of December 2016, 404.93 ppm," wrote the verified @BadlandsNPS account. The account continued to post, "Today, the amount of carbon dioxide in the atmosphere is higher than at any time in the last 650,000 years. #climate" Followed by "Flipside of the atmosphere; ocean acidity has increased 30% since the Industrial Revolution. "Ocean Acidification" #climate #carboncycle"

A few hours after posting, the tweets were removed from the @BadlandsNPS account. It was not clear who composed the tweets or why they were taken down -- including whether or not the deletion involved the Trump administration.

The tweets came after the Trump administration today placed a temporary "freeze" on public communications shared by federal agencies like the Environmental Protection Agency and the United States Department of Agriculture.

The removal of the Badlands tweets drew condemnation online and from Democratic National Committee. "Vladimir Putin would be proud," wrote Adrienne Watson "in response to the deletion of the Badlands National Park Service tweets about climate change in defiance of President Trump's gag order."

While Trump's pick to head the Department of Interior, Rep. Ryan Zinke, R-Montana, said that he does not think climate change is a hoax, the topic has been a hot button during Trump cabinet confirmation hearings as President Trump has previously stated "The concept of global warming was created by and for the Chinese in order to make U.S. manufacturing non-competitive." However in an interview with the New York Times, Trump said he now has an open mind to climate change and human connections to rising temperatures.

"I think there is some connectivity. There is some, something. It depends on how much," said Trump. "It's one issue that's interesting because there are few things where there's more division than climate change."

Press Secretary Sean Spicer was asked about the freeze on agency social media accounts during his press briefing on Tuesday. "I don't think it's any surprise that when there's an administration turnover, that we're going to review the policies," said Spicer about reports that the Environmental Protection Agency was barred from public communications.

Spicer said the Department of Interior seemed to break with social media policies.

"My understanding is that because they had inappropriately violated their own social media policies, there was guidance that was put out to the department to act in compliance with the rules that were set forth," said Spicer.