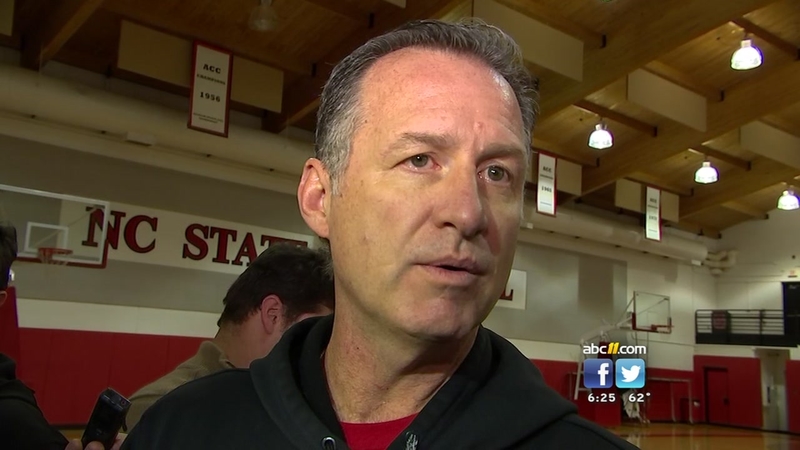 RALEIGH, North Carolina (WTVD) -- A day after multiple sources told ABC11's Mark Armstrong that N.C. State officials had definitively decided during the weekend to fire head basketball coach Mark Gottfried at the conclusion of the season, the coach steered clear of questions about his future.

Instead the embattled coach of the underachieving Wolfpack team chose to focus his attention on Wednesday night's ACC rivalry game against North Carolina (21-5 overall, 9-3 in the ACC).

"I'm going to answer any questions in regard to the game tomorrow night. I'm not going to get into any rumors," Gottfried said Tuesday.

In N.C. State's most recent game, the Wolfpack suffered a 30-point loss to Wake Forest on Saturday -- the largest margin of defeat ever in Winston-Salem. The defeat meant the Demon Deacons swept the Pack for the first time in a dozen years.

"My focus is on getting them ready to play against North Carolina," Gottfried said.

N.C. State has denied reaching a decision on the program's direction.

Thought Gott handled things today about as well as he could. He was not going to go there, as was anticipated.

"We are preparing for the game as if it would be any other game," Gottfried said. "They're really good. And we know it. Obviously the game we played in Chapel Hill, we were a disaster. We know it, and we've got to turn that around."

Gottfried has three years left on his contract. The buyout on his deal would cost the university $2 million.

The Wolfpack is 14-12 overall and 3-10 in the conference heading into Wednesday night's home game against the Tar Heels.

In their previous meeting this season, the Tar Heels embarrassed the Wolfpack 107-56 on Jan. 8 in the Smith Center. That game was postponed a day because of a snowstorm that hit the Triangle.

"We just man to man need to buckle down and compete and fight our butts off," said Wolfpack guard Torin Dorn. "That's really all we've talked about in the locker room, as a team, fighting as hard as we can and getting this thing turned around."

North Carolina coach Roy Williams has had astounding success against the Wolfpack, going 31-3 in meetings against his team's Raleigh rivals.

What's the key to his success?

"We've have good teams," Williams said with a chuckle. "That's the secret right there."

The game tomorrow night will be the 500th for Williams at UNC as head coach. He has more wins in 1st 500 (386) than anyone in ACC history

Despite that dominant mark, and the absurdly easy win earlier in the season, Williams isn't taking the beleaguered Wolfpack lightly. After all, N.C. State did manage to do something that his Tar Heels couldn't this season -- beat Duke at Cameron Indoor Stadium.

"We realize the game got out of hand (in Chapel Hill," Williams said. "They'll be more enthused. They'll be fired up; they'll be able to make some amends for some of the other things that have happened. Some of their other losses can be balanced out by one game if it's us."