National champion Tar Heels back in NC for celebration 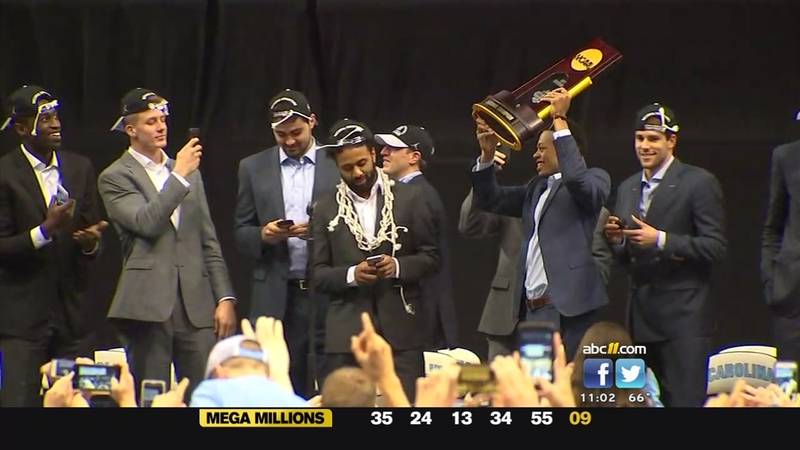 The team's plane arrived at RDU around 6 p.m. Tuesday and the players and staff boarded buses for the ride back to Chapel Hill for a raucous victory celebration.

Select UNC players address the fans during the celebration Tuesday night at the Dean Dome in Chapel Hill.

"I watched the game over at the mansion," he said. "It is the best, worse game I think I've seen in a long time. It was an ugly win. But it was a lot of fun for Carolina fans."

The welcome reception began at 6:30 p.m. at the Dean Smith Center, with plenty of fans packing the arena ahead of the players' return.

Coach Roy Williams thanking the troopers who are about to escort the #NationalChamps back to Chapel Hill https://t.co/sOO42o4Np1 pic.twitter.com/GcPk41DHe9

It was an energetic celebration, just like the watch party Monday night at the Dean Dome that ended with thousands flooding Franklin Street for a massive victory rally.

One alum, who was one of the thousands partying on Franklin Street all night, said he was a student when the team won its last championship in 2009.

"It was still nice to see the next generation of Tar Heel fans," Kevin Dodson said. "They were climbing on stuff. I was on the street enjoying the views."

Dodson said he kept ashes from one of the celebration bonfires on Franklin Street and said it smelt like victory!

It's deafening inside the Dean Dome as the #UNC #NationalChamps arrive #ABC11 pic.twitter.com/NDBGQAYGq2

Students and fans were electric when the team beat Gonzaga, 71 to 65.

The victory comes just one year after UNC lost the 2016 title game to Villanova at the buzzer.

"That was the last couple of craziest seconds of my life because I had flash backs to last year," UNC Student Anna Morrison said. "I don't have a voice right now. It was incredible to end with spirits like this. I can't even."