The bill was slipped in just before the 6 p.m. deadline to file bills for the long session, and is certainly one of the most provocative filed to date.

House Bill 780 is titled "Uphold Historical Marriage Act," and is sponsored by some of the House's most conservative legislators.

The News and Observer reports those legislators frequently file bills that don't get a hearing because House GOP leaders don't support the proposals.

Republican Reps. Larry Pittman of Concord, Michael Speciale of New Bern and Carl Ford of China Grove say in their proposed legislation that the U.S. Constitution's states-rights amendment allows North Carolina to decide for itself what its marriage laws should be.

The bill states that the 2015 U.S. Supreme Court ruling that legalized same-sex marriage across the country "is null and void in the State of North Carolina."

ABC11 reached out to the three primary sponsors of the bill, Pittman, Speciale, and Ford, but all had headed home for the Easter recess. None returned our calls for comment.

The bill quotes the Christian Bible and said the ruling "exceeds the authority of the court relative to the decree of Almighty God that 'a man shall leave his father and his mother and hold fast to his wife, and they shall become one flesh' (Genesis 2:24, ESV) and abrogates the clear meaning and understanding of marriage in all societies throughout prior history."

"Marriage equality is the law of the land in North Carolina and the entire nation, no matter what half-baked legal theories anti-LGBT lawmakers try to put forward," said ACLU-NC Policy Director Sarah Gillooly. "This bill is absurd, unconstitutional and further proof that some North Carolina legislators remain committed to discriminating against LGBT people and their families. North Carolina lawmakers cannot defy the U.S. Supreme Court based on their extreme personal views."

The North Carolina Democratic Party added, "Republicans in the General Assembly seem to have a special talent for embarrassing themselves and our state. Instead of wasting their time on hateful, discriminatory and clearly unconstitutional legislation, they should be working with Governor Cooper to improve our schools and cut taxes for the middle class."

The bill would order state government to return to the constitutional amendment known as Amendment One, which was approved in a 2012 voter referendum.

Other states that have tried to defy the Supreme Court have failed.

"The majority of North Carolinians feel like, who am I to judge? If 2 people love each other and want to honor that commitment, that's something society should be in favor of," Ames Simmons of Equality NC told ABC11 on Tuesday.

Information from this article was contributed by the News and Observer. 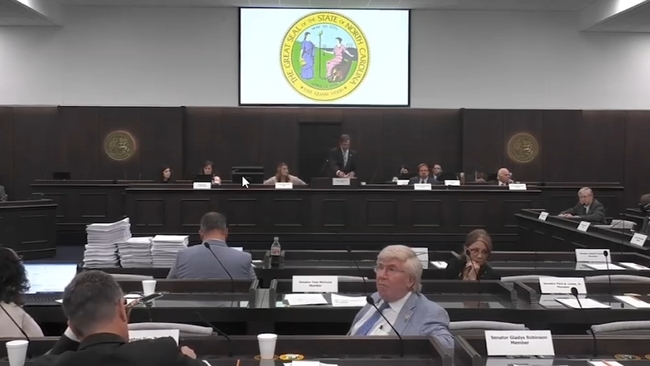