The chant rang out in two cities Thursday for the umpteenth time but despite flagging support in the courts, supporters say they have new hope in a new administration.

But a spokesperson for the AG's office told the ABC11 I-Team something a little different. Laura Brewer said by email, "Our office has been looking into this case for several weeks. We'll be able to comment the specifics of our review after it is concluded."

Sharpe is accused of a 1994 murder, and was arrested when he was 19. The Pitt County man has been behind bars for more than 20 years. Sharpe has always maintained his innocence.

Supporters can tick off a list of reasons they believe Sharpe to be innocent as he claims:

Sharpe's family and supporters, including his attorney, say they've nearly run out of options in state courts and are hoping the 100,000+ petitions they dropped off with Gov. Roy Cooper and Stein will make a difference.

"He was lied on, he was framed," Barber said. "High people in the system know it and have chosen not to act from the state to the local. Any people of moral conviction needs to be saying free Dontae Sharpe because he represents not only his conviction but the brokenness of our system. And he said something today that struck us all; he said, this life is not normal. It's abnormal."

Barber said he washed Sharpe's feet at the Johnston Correctional Center in Smithfield and dried them with his religious stole. After, he gave it to Sharpe's mother to have until her son is released.

"I wear this stole all the time," Barber said to applause, "but I'm not wearing it anymore until Dontae is free." Barber then turned his focus to Stein and Governor Cooper.

"This is no time to be like Pilate and wash your hands of this," Barber implored. "This the time to use your hands, your power and your father to do one thing: Free Dontae Sharpe." 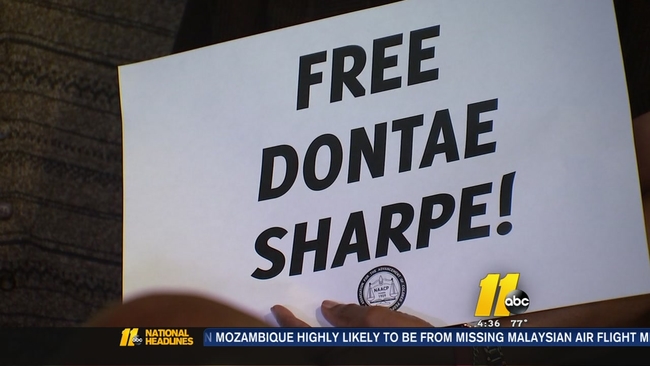