Woman drowns after driving through floodwaters 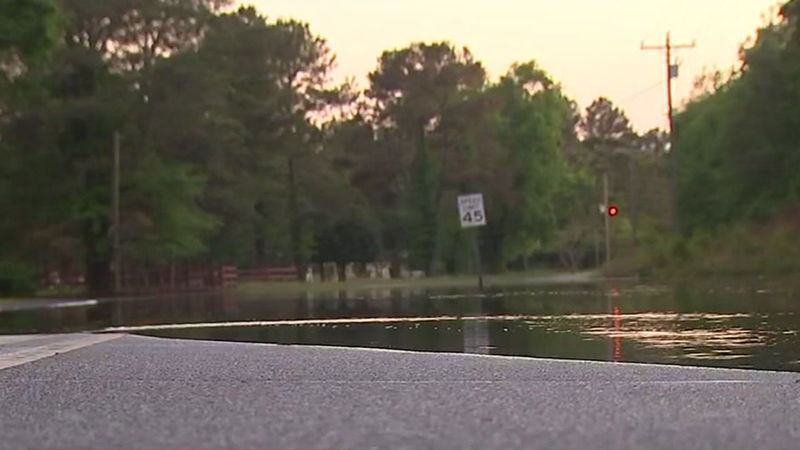 RALEIGH, North Carolina (WTVD) -- North Carolina Highway Patrol troopers say a woman drowned Wednesday night after she drove around several barricades and into floodwater along a stretch of N.C. 58 in Greene County, the Wilson Times reported.

Eight primary routes and 109 secondary roads are impacted by high water in eastern North Carolina. I-795 / US-264 in Wilson County was closed in both directions between NC-42 and US-301 due to flooding from the Contentnea Creek. It was reopened Saturday afternoon.

Officials say drivers should never drive around barricades, even if the road appears clear. Flooding can cause washouts underneath the roadway, and transportation crews will not open a closed road until it has been inspected for safety.

Overnight, the Tar River got above major flood stage and crested after all the water from Tuesday's rains ran downstream.

Edgecombe County officials are asking all property owners to monitor their situation closely and make necessary provisions for possible flooding, especially those in areas recently impacted by Hurricane Matthew. Flood projections may change, so residents in low-lying areas should remain on alert.

An emergency shelter is open for residents at 500 Davis Street in Tarboro. The shelter will remain open until further notice.

It is the second time in six months that evacuations are underway in Edgecombe County.

Rocky Mount city officials say the area should be out of moderate flood levels by Friday morning.

Even though the Tar River has crested, low-lying areas are still underwater in Rocky Mount as the city's Swift Water Emergency Response Team performed about 16 water rescues over the past few days.

In Johnston County, town officials in Smithfield said the Neuse River is expected to crest at 24.5 feet. During Hurricane Matthew, it crested at 29 feet. There are still widespread road closures as water covers many areas.

In Clayton, the Neuse River crested around 19', bringing it to "major" flood stage.