Panthers select versatile running back Christian McCaffrey at No. 8 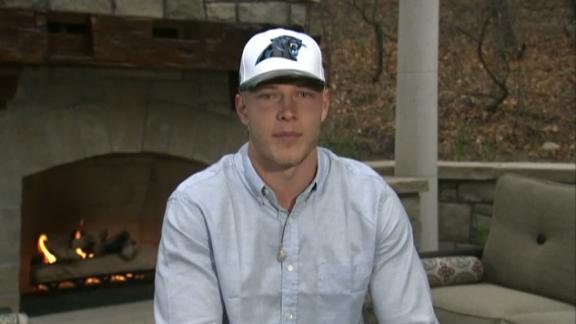 CHARLOTTE, N.C. -- The Carolina Panthers legitimized Christian McCaffrey's late rise up draft boards on Thursday night by making the Stanford running back the eighth pick of the NFL draft.

McCaffrey was the second running back taken in the top 10. LSU's Leonard Fournette went No. 4 to the Jacksonville Jaguars.

"This is a dream come true right here," McCaffrey said. "This is an unbelievable honor. I can't tell you how thankful I am for the coaching staff believing in me. I'm out of words right now.

The Panthers selected McCaffrey as part of an offseason evolution of the offense to take the pressure off quarterback Cam Newton as a runner.

Newton, who had surgery to repair a partially torn rotator cuff in late March, is expected to have less involvement in the running game out of the read-option after a 2016 season when he took a pounding.

McCaffrey not only can spell starting running back Jonathan Stewart, he also can fill a vital role as a slot receiver and return kicks.

"I've always prided myself on being a football player. For the guys who feel like they are glued to one position or one sport, don't do it man, do whatever you want to do," McCaffrey said.

"That kid is a rock star," Stanford offensive coordinator Mike Bloomgren told ESPN. "I don't know what he can't do."

McCaffrey did it all at Stanford. The son of former NFL wide receiver Ed McCaffrey broke Barry Sanders' NCAA season record of 3,250 all-purpose yards in 2015. He ranked second in the nation with 2,019 rushing yards in route to finishing second in the Heisman Trophy voting.

He followed that with 1,603 yards rushing and 310 yards receiving this past season.

He began surging up draft boards at the NFL combine in February after running the 40-yard dash in 4.48 seconds and excelling in most of the other running back and receiving drills.

"The son of a gun is just good at life," Bloomgren said. "All the girls think he's the most beautiful thing in the world. He's got those blue eyes. They don't see when the switch turns and he's the perfect football player."