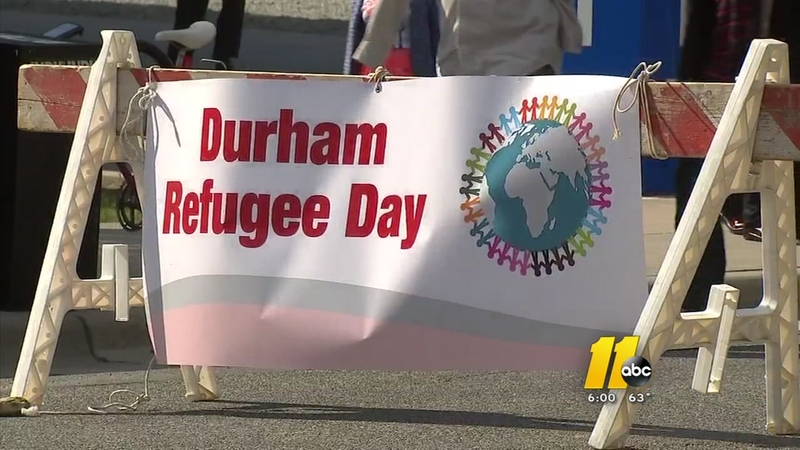 DURHAM, North Carolina (WTVD) -- The city of Durham has declared May 6 as 'Refugee Day.'

To commemorate the special day, refugee agencies hosted a block party at Central Park in downtown Durham on Saturday.

"I'm very happy today," said Humeera Ahmad, a refugee living in Durham after leaving her native Pakistan more than a year ago.

Art, music, food, games and educational materials about refugees added to the fanfare.

Saturday's showcase provided a safe space for the community to celebrate and support Durham's immigrant communities, those groups who are either undocumented, seeking asylum, or Muslim.

Ahmad said people like her are not terrorists, just human beings who want a better life.

"They have nothing in their own country," she said. "The circumstances are very bad. They are in danger."

Lenny Ndayisaba, from Congo, was one of the event's guest speakers.

He shared his story of living in a refugee camp for 18 years in Rwanda before arriving in America three years ago with the help of American allies and the United Nations.

"I'm not alone," Ndayisaba said. "I'm with other people who are really happy to be living with us."

The Refugee Day celebration was born out of Durham City Councils resolution in February.

The resolution opposed President Donald Trump's January 27, 2017, Executive Immigration Order, which eventually failed to hold up in the courts.

Under the president's revised order he signed in March, immigration is suspended from six predominately Muslim countries.

For many, the gathering was also a reminder their fight for immigration rights continues.