Olympic champion Laura Wilkinson, 41 and mom of 4, wants one more dive at gold 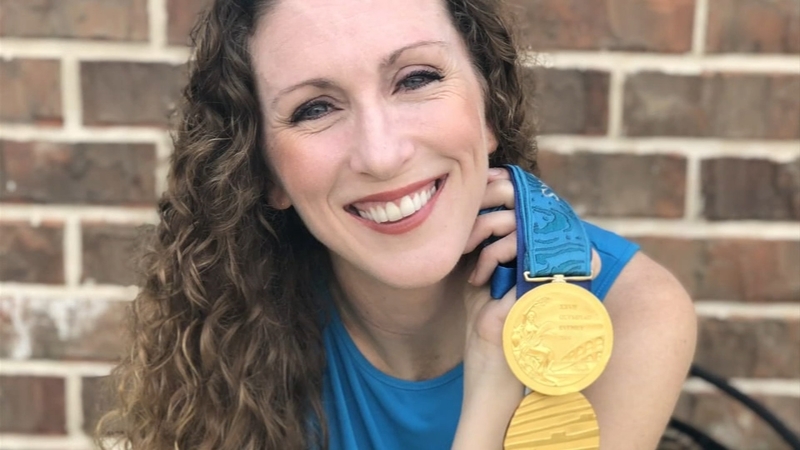 Olympic diver, gold medalist, and mom of four to go for gold again in 2020 Olympics

THE WOODLANDS, Texas -- Olympic gold medalist Laura Wilkinson is a legend in the Houston area. The celebrated diver represented the United States in three Olympic Games before walking away in 2008 to start a family.

Now at the age of 41 with four kids, she has her sights set on making history in the 2020 Olympics, and she's fighting to beat the odds.

Wilkinson shocked the world when she overcame a crushed foot to win the platform gold medal in the 2000 Olympics.

She returned to the Olympics two more times, walking away in 2008 without a medal, but she was in search of something more.

"I retired in 2008 because I wanted to be a mom," said Wilkinson. "It wasn't so much that I didn't want to dive anymore. I was just 30 years old and we'd put it off for a while and I was really ready to be a mom. And you know, being pregnant makes it kind of hard to get into those nice, tight tuck and pipe position. So, I hung the suit up."

Wilkinson and husband Eriek Hulseman became a family of six. First came Arella, then their adopted daughter Zoe, then Zadok, and another adoption for their fourth child, Dakaia. She finally had the family of her dreams. But while watching the 2016 Olympics in Rio, she realized the diver inside of her needed one more shot at glory.

"I had this dream and this desire to come back and dive again," she said. "I thought, 'I've got about a million reasons why I shouldn't do it and why this isn't right and what it would take away from my kids, and how can I do that to my kids?' And all these reasons I shouldn't do it. But they were all excuses."

Her longtime coach Kenny Armstrong at The Woodlands Diving Academy invited her to spend the little time she had to spare after dropping the kids off at school back in the pool for recreation. Wilkinson said it felt like coming home and it wasn't long before the fire was back.

"And so I asked him 'Would I be crazy to try and do this again?' And he said 'No.' So here we are," Wilkinson said.

Wilkinson is now flipping and diving with teen teammates not even old enough to remember the 2000 Olympic Games. She also underwent a spinal fusion in 2018 to fix two disks in her neck causing severe arm pain. All of that, plus family duties, means training looks very different today. But this mom is here to make history.

"Here she is 41 years old, she's got four children. You've got these kids that are trying to get somewhere close to where she was, how do you pay for a mentor like that," Kenny Armstrong said.

The journey back to the platform has not been without sacrifice.

Wilkinson says she hopes other women realize you can be a mom and still chase your dreams.

"Instead of being afraid and like running away from your fear, you've got to stand up, stare it down and face it, you know? And that allows you to do amazing things," Wilkinson said.

She plans to keep flying, twisting and tucking to eventually make a redeeming splash in the 2020 Olympics at the age of 42.

Right now, Wilkinson is working her way back to platform and plans to compete this winter. The Olympic trials are next June. She is looking for sponsors to help her get to the Tokyo Olympics that kick off July 2020.

Two local athletes from Cypress have been training at Stone Moves Gym, in preparation for Rock Climbing's debut at the 2020 Tokyo Olympics.