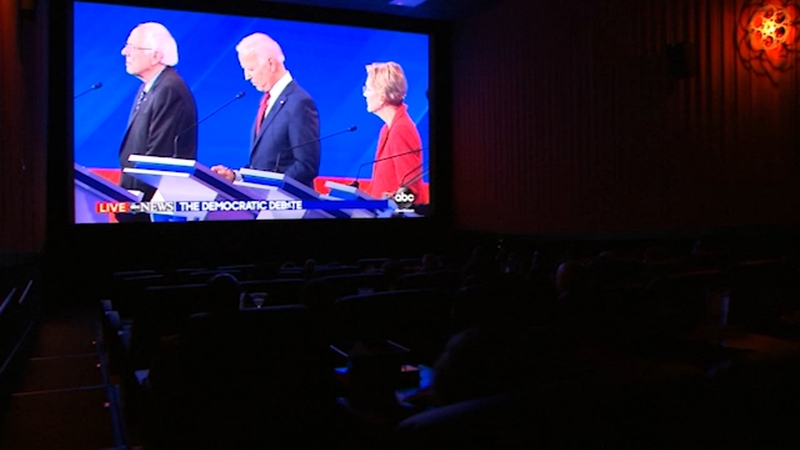 RALEIGH, N.C. (WTVD) -- Given the fact that Raleigh's Alamo Drafthouse Cinema was hosting a Downton Abbey premiere party along with another special premiere event for the new movie Hustlers, Thursday night, the Democratic Debate watch party in Theater 2 was certainly counter-programming.

But that theater was filled too with plenty of Raleigh voters still searching for the right candidate.

Lots of candidate shopping going on at this #DemDebate watch party at Alamo Drafthouse Cinema in Raleigh. #DebateNight #abc11 pic.twitter.com/romSgjnlKe

This decidedly Democratic crowd took in the contest with cocktails and an open mind. With months before its time to actually vote, most here were still candidate-shopping.

"I like them all actually," said Ryan Chapman about the field of 10 candidates on stage in Houston for the ABC News debate. "If I had to pick one, it would be Biden."

But debate watchers such as Tim Rusk are keeping their eyes on the lesser-known candidates in the field. Electability is not Rusk's deciding factor.

"I'm not sold on Biden yet," Rusk said. "(Electability) has no influence over my decision whatsoever. I'm gonna pick the best candidate and let the chips fall where they may."

At this watch party, Rusk seemed to be in the minority.

"There are several candidates that I like. I'm not sure they're electable. So I am putting that in the mix," said Elizabeth Foster.

Sen. Elizabeth Warren on gun control: "The question we need to ask is when we've got this much support across the country...why doesn't it happen? And the answer is corruption pure and simple. We have a Congress that is beholden to the gun industry." https://t.co/INdRXlIwFs pic.twitter.com/oDci8lvmgQ

Erika Jones added, "I think (electability) is important because I do want us to take back the White House. But I think any of them should be able to beat (Trump). I don't know if they can."

There were some scenes in this big-screen drama that some watchers gave a bad review. Some take umbrage with the intra-party fighting; preferring the Democrats save their fire for the president.

"I don't like it. I don't care for the infighting among each other," Chapman said. "It's OK to disagree with policies but the infighting is disappointing."

A new Washington Post-ABC News poll this week found that among Democratic and Democratic-leaning voters, 45 percent thought Biden had the best chance to beat Trump. But just 24 percent thought he'd be the best president for the country among the primary field.