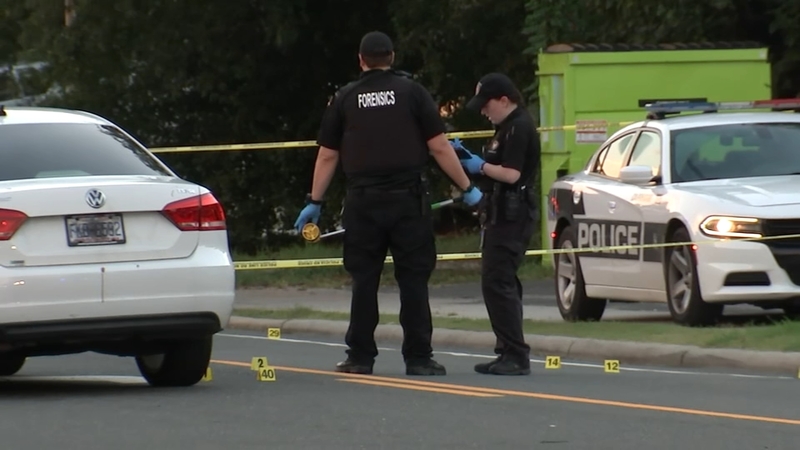 DURHAM, N.C. (WTVD) -- Durham police officers are investigating after one man was killed and another injured in a shooting in the area of the Forest Hills Shopping Center.

Officers responded to a shooting call in the 1300 block of Hill Street near University Drive around 4:30 p.m. Thursday.

Friday, police identified the man who was killed as Robert Darrell Taylor Jr., 22, of Durham. The wounded man, who is 18 years old, was taken to a hospital for treatment.

An ABC11 crew at the scene said police placed at least 15 evidence markers around a roped-off vehicle, indicating more than a dozen shots had been fired.

Just pulled up on this scene in @CityofDurhamNC. @DurhamPoliceNC has university drive blocked off in both directions as they’re investigating this fatal shooting. #ABC11 pic.twitter.com/z8lWJuGdX6

University Drive was closed in the area of Forest Hills Shopping Center near Hill Street as police investigated.

The shooting shocked and angered those in the community.

"When you have young men or young women - whoever was involved - that start shooting is ridiculous," said community activist Victoria Peterson. "Now we have to worry whether we are going to get shot at because anybody that's sitting out here could get shot from a stray bullet."

Thomas Boyd has lived in Durham for two years and frequently shops at the Compare Foods on University Drive.

"I feel so sad that this is happening in my neighborhood," Boyd said. "I hate to see anyone lose their life."

No one is in custody.