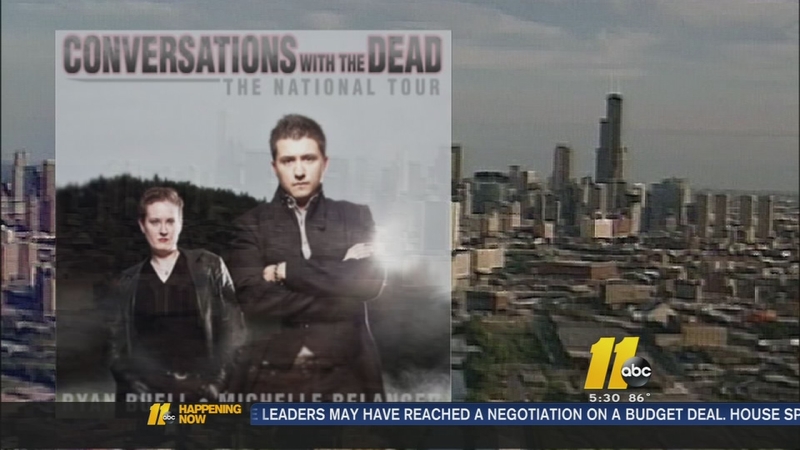 RALEIGH (WTVD) -- The I-Team Troubleshooter reports the story of a celebrity ghost-hunter who has cancelled appearances and fans say they aren't getting refunds.

Paranormal expert Ryan Buell appeared on the cable TV series "Paranormal State" looking for ghosts or trying to prove that life after death is real.

Buell claims to be based here in the Triangle; however the ghost hunter has a pretty big following nationwide.

Teresa Harrell paid over $400 to get special VIP tickets for her and her husband and drove six hours to Chicago to see Buell's "Conversations with the Dead Tour."

"I watched all of Ryan Buell's movies that were on the TV and I also read his book," Teresa said.

However, just days before the show, she got the bad news it was postponed.

"They rescheduled the event for like three weeks later and didn't tell anybody what was going on," Teresa explained.

According to Buell's Facebook page, there were scheduling conflicts with venues. Teresa didn't buy it.

"What I did was call the venue directly and I spoke with the manager and he told me that they had not spoken with him since they had rescheduled the event. He had no deposits or anything and couldn't get a hold of them," she said.

The rescheduled shows never happened. Instead, the entire tour was cancelled and fans wanted their money back.

Besides Teresa's $400, we've heard from more than a dozen Buell fans who are all out hundreds of dollars, including Melanie Gramlich.

She paid about $300 for Buell's Calgary show and Sabrina Cryderman drove almost six hours to Edmonton and paid $160 for a show that never happened.

"They've done this across seven states and they've done it to Canada too," Teresa said.

Buell fans have also taken to social media to complain about cancelled shows, undelivered books and paid webinars that were never completed.

Michelle Belanger, a guest speaker on Buell's tour, also recently announced that she would be dropping out due to lack of planning.

"I have no plane tickets, no hotel reservations, no idea what the plan is supposed to be. That's not for lack of asking. That's just how things stand."

"I had to give an ultimatum: there is no way I will be able to participate in the 'Conversations with the Dead Tour' if the dates get rescheduled again," Belanger explained.

Buell's fans started out sympathetic after he cancelled shows in 2012 claiming he was fighting pancreatic cancer.

However, when refunds weren't given, we started hearing from them.

In late 2013, Buell told People Magazine he was close to remission, ready to tour again and he started selling tickets for this year. Yet, none of the shows happened.

Just last week, Buell posted on Facebook that health issues would cancel the tour. He also wrote that his company, Paranormal Research Society, never got any of the ticket money and that PayPal is responsible for refunds.

While Teresa is sympathetic to Buell's health issues, she doesn't understand why fans can't get their money back.

She had this to say to Buell, "Take responsibility for what you've done, we're human we make mistakes, we hurt people. But man up, say I made a mistake, I took money that's not mine."

"Or I really thought we could do this but we can't, let's get the refunds out to you people and be sending those checks out," Teresa said.

Good news for Teresa, who finally convinced her credit card company to refund the charges she made.

Many others haven't been so lucky, and some tell me they're trying to file a class action lawsuit.

Chip Coffey, the famous psychic and medium, also reached out to me concerning the "Conversations with the Dead Tour." He says he was supposed to go on the tour with Buell to six U.S. cities, but he had to drop out before the tour started because it wasn't being properly managed or executed correctly.

Before Coffey bailed on the tour, he says there was more than $80,000 in ticket sales. Coffey says he didn't get a dime of that money. He adds he prays for Buell everyday, but business is business, and if fans are owed money Buell should return their money.

We reached out to Buell and his company via phone, email and at addresses we had for him, but no response. It was posted on Buell's Facebook page over the weekend that PRS is doing their best to move refund requests along for the USA and Canadian tours.

As for PayPal, they wouldn't comment on the specifics of any PayPal account, but in general a rep says they don't hold any money - they just take a broker fee.

They have a buyer protection policy and can secure customers a refund only if it is filed within 45 days of purchase.

They encourage customers to be cautious of buying from sellers who have delivery times longer than 45 days.

The best advice, dispute the charge with your credit card.