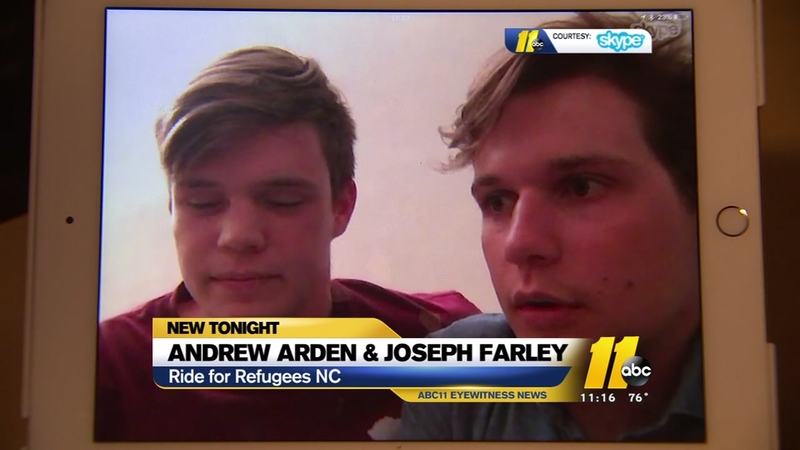 PARIS (WTVD) -- Two NC State students on Tuesday completed an 800-mile trek across Europe dubbed "Ride for Refugees NC," which they created to raise awareness and raise money to aid refugees resettling in a new environment.

"We're young," NC State student Andrew Arden told ABC11 back on July 6. "And we drink a lot of coffee."

Arden and classmate Joseph Farley arrived in Paris on Tuesday, the final leg of their long ride.

"Helping people integrate is a really important part of bringing refugees into the country," Farley said. "We want to try to show people how it's done well."

Riding 40 miles a day for 20 days, the young men began their trek in Hamburg, Germany, then biked through Amsterdam, Brussels and Paris - and every small town and village in between. They picked these destinations because they are all major cities flooded with refugees from the Middle East.

The influx of immigrants, many from war-torn countries such as Syria, have splintered communities across Europe and led to a resurgence of nationalism in those countries.

Arden and Farley said they met and stayed with families from Syria, Iraq and Afghanistan.

"When you hear the stories of people who have such ambition and passion and drive - people who have tried seven to twelve times to cross from Turkey to Greece and never gave up - then three flat tires in one day can't stop you."

Faisal Khan, with the Carolina Peace Center, helped coordinate the trip from the US.

Two NC State students got quite the cultural awakening while raising money for a good cause in Europe.

Arden and Farley raised nearly $1,300 on their trip, and they plan to continue their campaign through the summer.

All of the money being raised will be given to Dorcas Ministries, which will use 100% of the donations to assist refugee families in the Triangle.