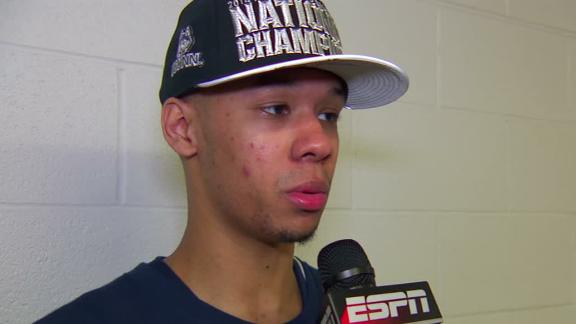 Amid a rain of confetti, Shabazz Napier basked in the celebration on the court after being named the most outstanding player of the Final Four following the 60-54 win over Kentucky.

"You're looking at the hungry Huskies," Napier told the crowd and TV audience. "Ladies and gentlemen, this is what happens when you banned us."

A year ago, the Huskies were preparing for their first season in the new American Athletic Conference after being booted from the Big East and not welcomed by any of the so-called power conferences. Jim Calhoun, who built the program, had left because of health problems. And most damaging -- the NCAA postseason ban had triggered an exodus of five key players to the NBA or other schools.

But Napier stuck around. On Monday night, he had 22 points on 8-of-16 shooting with six rebounds and played lockdown defense in his final collegiate game.

His career began as a freshman on the 2011 Connecticut team that won the title behind star guard Kemba Walker.

Now, Napier is the man.

"I will say one thing when they say Ray, Rip, Ben, Emeka, Kemba -- they'll soon say Shabazz," Calhoun, who won the 2011 title, said after watching the 2014 squad cut down the nets.

Not bad company at all.

On Saturday against Florida in the semifinals, Napier had 12 points and six assists.

"He's up there, he's up there," forward Niels Giffey said when asked where Napier rated among the history of Huskies guards. "He bleeds blue. He bleeds UConn."

Napier looked like a floor general the way he directed players on offense with forceful motions. Instead of sulking after one blown play, Napier waited down court for his teammates and raised his right fist.

Giffey said Napier promised his team after the 10-point loss to Louisville in the AAC tournament final last month that they would cut down the nets in Texas.

"I looked into his eyes and I really believed him," Giffey said.

Napier, Huskies Waited For This Moment
Shabazz Napier explains how Connecticut's defense was able to lock down Kentucky in the national title game.

Connecticut Wins National Title
SportsCenter Highlight of the Night: Shabazz Napier scored 22 points to lead Connecticut to its fourth national title since 1999 with a 60-54 victory over Kentucky.