State has millions in unclaimed fund. How to see if any belongs to you! 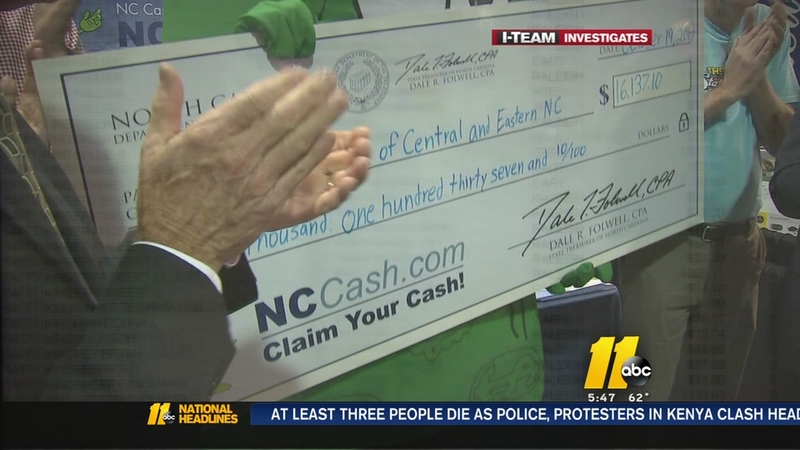 Do you have unclaimesd money waiting for you

RALEIGH (WTVD) -- Typically, I'm warning you to stay away from claims of free money no strings attached, but not today.

There are literally millions of dollars, $659 million to be exact, sitting in North Carolina's unclaimed property fund. And it's money that could belong to you.

FIND OUT IF YOU HAVE MONEY IN THE STATE'S UNCLAIMED FUND

What exactly is the unclaimed fund?

The unclaimed property fund consists of bank accounts, wages, utility deposits, insurance policy proceeds, stocks, bonds, and contents of safe deposit boxes that typically have been abandoned from one to five years.

State law requires financial institutions, insurance companies, public agencies, and businesses to turn over unclaimed property to the state if there has been no contact with the owners for the statutory period of time - there is no time limit for filing claims.

The state maintains unclaimed assets in trust for the rightful owners forever. It's important to know that the state does not charge an owner for processing claims. This is a free service provided by the state.

However, there are some sites that will charge you, so be aware of them as this service is free from the state.

Reuniting people with their money

Armed with a list of people who have money in the state's unclaimed fund, I hit the streets hoping to reunite the money with the rightful person.

It took some time, as many people did not live at the addresses the state had for them.

I was able to find a daughter whose mother has more than $121,000 in the state's unclaimed fund. She said her dad had passed away and her mom is in memory care, and she said this money will pay for several more years of care.

By knocking on doors, I was also able to let a Raleigh man know that his mom had more than $18,000 in unclaimed funds.

He said, "When people pass away you find out things later. She's been gone for four years now, and it's just surprising that things pop up."

I also surprised Brian Brown when it came to money in his mom's name. She has more than $12,700 in the unclaimed fund.

He said he's never heard about the funds but said the money will help his mom greatly.

When I tracked down Joel Mitchell, he said I helped remind him about the more than $42,000 that was owed to him.

He said his friend looked up his name a while ago and told him about it, adding that he forgot all about filing for the money until I showed up at his door.

He said the money is from a former employers' 401K, and when he gets the money, he's going to reinvest it right back into his retirement account.

Besides people, businesses also have money in the account.

I tried to tell the Raleigh business CaptiveAire Systems Inc. on Paragon Park road that according to the state, the company has more than $25,000 owed to them.

The receptionist said her boss would be very excited about this news, but when she tried to get her manager to meet with me, she said he was in meetings.

I left my card and asked if he could email me or call me so I could tell him the good news, but no one ever got back to me.

One business that was very happy to learn about money sitting in unclaimed funds, the Food Bank of Central and Eastern North Carolina.

"With our efficiency at the food bank, every dollar that is donated to the food bank we can provide approximately five meals," said President of the Food Bank, Peter Webicki. "With $16,000, we are looking at over 80,000 meals from that check."

Another surprising find when I crunched the numbers is that state agencies also have money in the unclaimed fund.

Top 10 Wake County residents who have money to claim

Top 10 Wake County businesses who have money to claim

Schools always need more money right? Well, they should check the unclaimed fund site as many schools are on the list including Wakefield High School. According to records, they are owed more than $1,000.

State Treasurer Dale Folwell said once it's discovered you have money in the state's unclaimed fund, the turn around time to get the money is quick.

"We have a 90-day window where we try and process the claims if they are small enough amounts they get expedited," he explained.

The treasurer's office has outreach efforts to try and connect the unclaimed funds with the residents of North Carolina.

At the 2017 State Fair, anyone could walk up to the booth and type in their name to see if they are owed money.

So, what do you have to lose? Check your name, your parent's name, and if you're married don't forget to check your maiden name too.
Report a correction or typo
Related topics:
personal financeraleighmoneytroubleshooterfinanceraleigh news
Copyright © 2021 WTVD-TV. All Rights Reserved.
TOP STORIES
NC eyes door-to-door approach to get low-income residents vaccinated
Mass shooting on Austin's 6th Street: 13 hurt, suspect at large
Durham Sheriff: 10% percent cut in budget would be detrimental
As COVID-19 cases creep up in some states, NC trends remain steady
Rental car crunch leaves Raleigh woman without her reserved rental
TikTok trend, dry scooping, could land you in the hospital
4 new businesses open their doors in downtown Raleigh
Show More
Rocky Mount mother charged in 2020 death of infant
NC is prepared for hurricane season, says the guy who's seen it all
Everything you need to know about Your Shot at $1 Million
Fayetteville police make arrest in death of man shot 'numerous times'
LATEST: Cooper signs new executive order extending COVID-19 measures
More TOP STORIES News