Supreme Court allows for travel ban while appeals are heard 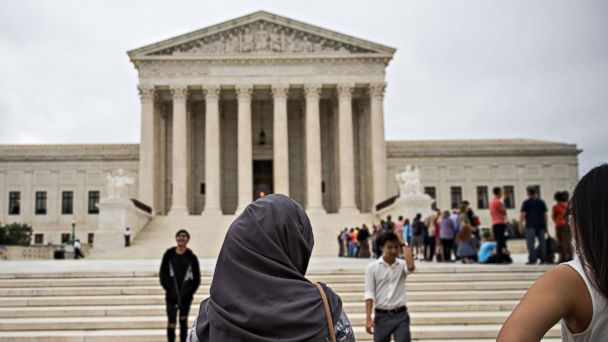 ABCNews
By ADAM KELSEY
President Donald Trump's nearly yearlong effort to implement a ban on travel to the United States from countries deemed to pose a national security threat earned a victory at the Supreme Court Monday, where it was ruled the order could go into full effect as it continues to face legal challenges.

"It's unfortunate that the full ban can move forward for now, but this order does not address the merits of our claims. We continue to stand for freedom, equality, and for those who are unfairly being separated from their loved ones. We will be arguing Friday in the Fourth Circuit that the ban should ultimately be struck down," Omar Jadwat, director of the ACLU's Immigrants' Rights Project, said in a statement.

The ban, now in its third iteration, currently covers travel from eight countries with varying restrictions ranging from the full suspension of both immigrant and non-immigrant entry, to restrictions on the uses of certain visas. The countries cited in Trump's order are: Chad, Iran, Libya, North Korea, Somalia, Syria, Venezuela and Yemen.

Amnesty International also responded to today's decision, stating: "This ban has always been, at its core, deeply cruel and discriminatory."

The group added: "It goes against our shared American values of dignity and equality for everyone, no matter where you come from or how you worship. Rather than keep anyone safe, the travel ban has caused chaos and instability for thousands of people people who just want to travel without fear and be reunited with their families."

The president issued the most recent travel ban in September. The first version of the ban encountered intense opposition and numerous successful legal challenges by critics of the administration who felt the first ban unfairly targeted majority-Muslim countries. The second version of the ban was permitted to go into limited effect in June after review by the Supreme Court, but key provisions only last for 90 and 120 days.

According to the government, the third version came after the Department of Homeland Security sent security and information-sharing requirements to foreign countries in July and identified the eight nations that neither met the requirements nor made improvements.