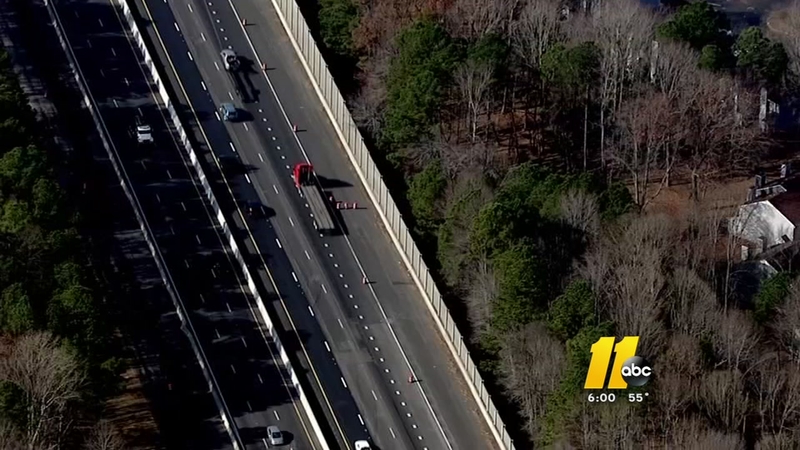 RALEIGH (WTVD) -- The North Carolina Department of Transportation's Fortify project on the south side of the Raleigh Beltline will not be completed this week as planned.

NCDOT officials said a colder than average November and occasional wet weather have made it difficult for the contractor to finish up last minute projects including lane markings.

They now estimate the project will be completed in "early 2018."

The good news? Once it's completed, the roadway will include some new exit only lanes at previously congested interchanges.

The bad news? Most commuters seem to think new travel lanes will be added.

We asked Beth Stancil of Cary, who works in downtown Raleigh and uses I-440 to commute, what she thought the Fortify project was all about.

"Widening it, repaving it, and improving some of the off and on ramps," Stancil told ABC11.

She wasn't alone in that thought.

Many other commuters said they thought Fortify was a widening project.

In fact, we couldn't find a commuter who did know what the project is about.

So, what exactly is the Fortify project?

The name "Fortify" was chosen because the project is actually a repair project to shore up the interstate's foundation.

The rock originally used as the foundation for the road has deteriorated and had to be replaced right away.

Stancil was disappointed saying, "That's a massive lost opportunity. They are already inconveniencing us by repaving and basically fortifying the property. But couldn't they just kill two birds with one stone and add an extra year and only inconvenience us once versus having to do this again?"

An NCDOT spokesman said the road will indeed have to be widened eventually but the foundation work couldn't wait.

"This is basically a repair project because the road was deteriorating and falling apart," Steve Abbott told ABC11. "And although ideally and down the road, we probably will be adding lanes, we had to get this fixed and quickly. And if you're going to add lanes there becomes right-of-way issues, environmental issues which would have delayed doing this project for a while. And we didn't believe the road would survive for that long."

But, Abbott notes, the DOT did add those exit only lanes; Raleigh commuter Roger Lawrie hopes it will make a difference.

"I suppose we'll have to see the actual product before we can see if it really does ease congestion enough," Lawrie said. "But in theory, it sounds great to me."
Report a correction or typo
Related topics:
travelraleighi 440constructiontrafficraleigh news
Copyright © 2021 WTVD-TV. All Rights Reserved.
TOP STORIES
CDC reverses course on indoor masks in some parts of US
Some Wake parents OK with masks as long as kids can be in class
Mental health experts applaud Biles' tough decision at Tokyo Games
Why this Haitian restaurant relocated from Brooklyn to Edgecombe Co.
LATEST: Cooper to 'review changes to CDC guidance'
800K COVID-19 vaccine doses in NC could expire by end of August
Show More
As COVID-19 cases surge, nervous parents prepare for school year
1 dead in movie theater shooting during showing of 'The Forever Purge'
495 new hepatitis A cases reported in NC this year
4-year-old dies after report of drowning in Harnett County
Mother, boyfriend charged after 5-year-old's death in Aberdeen
More TOP STORIES News