NC State's Al Freeman celebrates as the game ends. Freeman hit all seven of his three-point attempts and had a career-high 29 points. (Gerry Broome)

Now N.C. State can add another marquee name to its list of upset victims under first-year coach Kevin Keatts -- this one on the road, too.

Freeman scored a career-high 29 points and made 7 of 7 3-pointers, while the Wolfpack knocked down 15 shots from behind the arc to beat No. 10 North Carolina 95-91 in overtime on Saturday.

Feels like State played about as well as they could hope that half, and still the Heels are up 3. Gonna be interesting 2H to say the least.

In a game in which neither team led by more than six, it was N.C. State (15-7, 5-4 Atlantic Coast Conference) that finally pushed through in the final seconds in a venue that has been the long-running scene of frustration.

Omer Yurtseven added 16 points and 13 rebounds, including a huge putback with 30.9 seconds left in the overtime and his team up a point. And Markell Johnson sealed the win with two free throws with 3.0 seconds left, capping his own big day with 20 points and 11 assists.

Now the Wolfpack's notable wins include the reigning national champion Tar Heels (16-6, 5-4), Arizona and Duke when both were ranked No. 2, and a ranked Clemson team on Jan. 11.

"Coach's slogan has been the new era," Yurtseven said. "(The win) just shows it and it exactly represents what it says."

"We're a lot better shooting team than we've shown in some games," he said. "I can say it, I know you guys don't believe me. ... I've always said this: a good passing team is a good shooting team, so when we pass the ball, we make the extra pass and our guys are able to get their feet set, we shoot the ball well."

That was true of Freeman, a graduate transfer from Baylor who can score in bunches but often show shaky shot selection, too. He came in shooting 33 percent from the field, but made 8 of 11 shots Saturday and became the first UNC opponent ever to go 7 for 7 from 3-point range.

Massive win by the Wolfpack 95-91. Keatts had his guys ultra ready

"We just had to keep believing in each other, even when the percentages weren't there," Freeman said. "We know what we can do, keep shooting."

"We should be better than 5-4 in the ACC," Tar Heels wing Cameron Johnson said, "but there's nothing we can do about a game we already played."

N.C. State: The Wolfpack got a needed taste of success in Chapel Hill. N.C. State was just 1-13 here against Roy Williams-led UNC teams coming into Saturday, including last year's 107-56 debacle that stood as the program's second-largest margin of defeat in any game.

UNC: That's two straight losses for the Tar Heels, who look set for a big slide in Monday's new AP Top 25. They also found little offensive production outside of Maye and a more-assertive Pinson, with starters Joel Berry and Kenny Williams combining for just 10 points on 5-for-15 shooting.

Pinson finished 10 of 16 from the floor to go with a block and a steal in 36 minutes. At times, he was the best player on the court with his aggressive edge and put-your-head-down-and-attack play.

"I just tried to be aggressive and see what opportunities I had to attack," Pinson said. "I found some tonight and they're working out for me, but we ended up losing so it doesn't really matter." 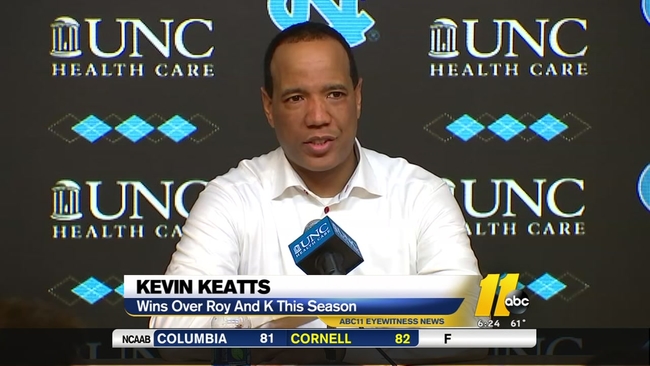