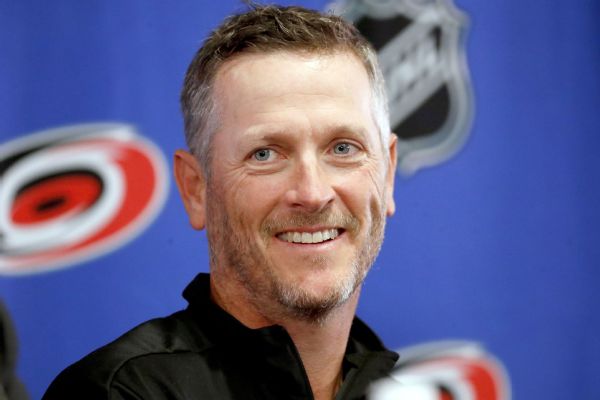 The new owner of the Carolina Hurricanes said on Tuesday that he wants to "explore playing games" with his team wearing the iconic jerseys of the Hartford Whalers, who relocated to Raleigh, North Carolina, in 1997 to become the Hurricanes.

"I think that's an unbelievably good look. I love it. I think we should have a store that sells that Whalers merchandise online. I think we should explore playing games in that jersey and selling that gear. It's part of the legacy," Dundon toldESPN 99.9 The Fan in Raleigh.

The National Hockey League and the Hurricanes jointly own the trademark on the Whalers' iconic green and blue logo -- a "W" with a whale tail above it, whose negative space created an "H." While Whalers-branded merchandise is available through the NHL's retail store and online shop, there isn't any available at Hurricanes home games.

Under former majority owner Peter Karmanos, there was never an effort to capitalize on the Whalers nostalgia movement by having the Hurricanes wear Hartford logos or having Carolina play a home game back in Hartford, Connecticut. In fact, Karmanos would downplay the legacy of his former team and the anger Whalers fans still held for him having relocated the franchise. "I don't know why the people there are so upset. The team hadn't ever won a thing. They had a celebration for a first-round playoff loss,"he told the Detroit Free Press in 2015.

There are still connections between the Hurricanes and their former incarnation in Hartford. Fans can be seen wearing Whalers gear to Carolina home games. GM Ron Francis was one of Hartford's greatest star players, having played for the Whale from 1981-91. While the Hurricanes returned the retired numbers of Whalers Rick Ley (No. 2) and John McKenzie (No. 19) back into circulation, no Hurricanes player has worn the No. 9 in honor of Whalers legend Gordie Howe.

The legacy of the Whalers has been kept alive in Hartford as well.The team's booster club has remained active in some capacity in the past 20 years since the Whalers' departure, organizing bus trips andattempting to rally support for the return of an NHL team to the city.

That might not happen, but Dundon sounds confident that the Whalers logo will return -- on the jerseys of his Hurricanes, if only for a few games.

"I just like cool stuff. If we don't, it will mean something went wrong [behind the scenes]," said Dundon, who said he's confident that the NHL would sign off on such an idea.