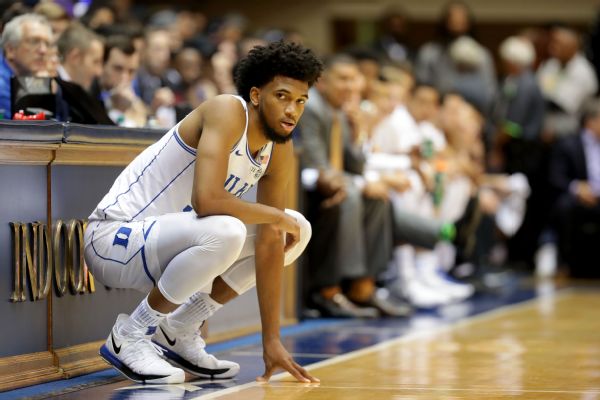 Duke freshman Marvin Bagley III will miss his third straight game, as the Blue Devils announced Bagley is out for Sunday's game against No. 11 Clemson.

Bagley III suffered a "mild" right knee sprain in the first half against North Carolina last week and has missed the last two games.

There has been no further detail on the severity of the injury or a timetable for Bagley's return.

"Marvin is getting better, but you just gotta be careful, and that's what we're trying to be and he's trying to be," head coach Mike Krzyzewski said after Wednesday's win over Virginia Tech. "It's really good performances because look, he has been pretty good for us. He's averaging a high double-double and all of a sudden it's not there. But we've had a chance to look at some other things now, and when he comes back, we have a chance to be a better team. Hopefully he'll be back soon."

Without him, Duke beat Georgia Tech and Virginia Tech. Sophomore Marques Bolden has replaced Bagley in the lineup, totaling eight points and seven rebounds in the two games. Javin DeLaurier has also seen a bigger role.