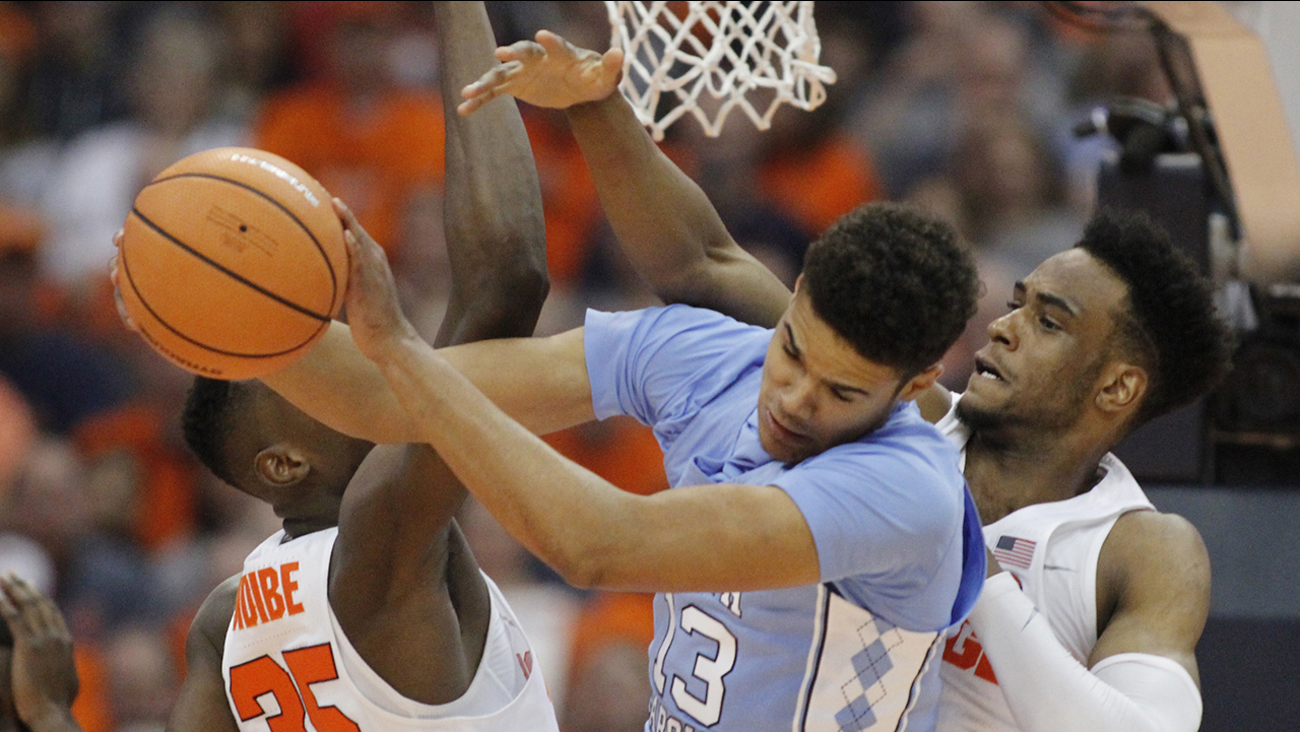 Theo Pinson scored a career-high 23 points, Berry added 18, including the tiebreaking layup with 1:36 left, and the No. 10 Tar Heels held off the Orange 78-74 on Wednesday night.

Syracuse had trailed almost the entire game until a late eight-point run knotted the score. Tyus Battle scored six of the points, his jumper with 3:05 to go tying it at 74.

With the clock ticking down inside the final 2 minutes, Syracuse had an opportunity to go ahead for the first time since the second minute. But after towering center Paschal Chukwu snared an important rebound after two straight Orange misses, Berry stole the ball and scored at the other end and the Tar Heels escaped.

"We made some dumb plays," at the end of the game.

"I knew he wasn't a solid player when it came to holding onto the ball," Berry said. "I saw through the span of the game his teammates were throwing it to him and he was losing the ball, so when he put it down it was like, 'This is my opportunity to grab it,' and so I just pulled it out and I got it."

North Carolina (22-7, 11-5 Atlantic Coast Conference) has won six straight, but this was the most difficult against a team fighting for its postseason life. Syracuse (18-10, 7-8) was coming off an important road victory over Miami and was teetering on the NCAA Tournament bubble entering the game.

The Orange shot 50 percent in the second half while holding UNC to 13-of-36 shooting (36.1 percent) to rally back, but they missed five shots in the final frantic 74 seconds.

"We just have to do a better job closing out games," said Battle, who had 26 points but missed all five 3s he attempted. "Just missed a couple of shots at the end. We had the game won. We just gave them the ball, gave them plays."

Sterling Manley had 12 points and top scorer Luke Maye had nine points and three rebounds, scoring only one point and snaring one rebound in the second half for UNC. Maye was averaging 18.4 and 10.5.

Frank Howard had 23 points and Oshae Brissett 17 points and 10 rebounds for Syracuse, the 10th double-double of his freshman year.

UNC built a double-digit lead early and every time Syracuse threatened the Tar Heels had an answer. Berry hit a 3 after Battle's drive had made it a one-possession game, 51-48 with 14:33 left. When Chukwu lost an offensive rebound seconds later, Pinson roared in for a slam at the other end.

"They're fighting to get into the tournament, so you knew they were going to keep coming at you," said Pinson, who had seven assists. "They fought the whole game and I know they wish they had this one."

Pinson's three-point play midway through the half gave UNC a 61-51 lead, but the Orange weren't through.

Battle's driving layup moved Syracuse back within 68-64 with 6:32 to go as the season-high crowd of 27,165, largest in the nation this season, shook the Carrier Dome walls.

Another 3 by Berry gave UNC an eight-point edge before the Orange made a final push with an eight-point run to knot the score. Battle scored six of the points, his jumper with 3:05 to go tying it at 74.

After Berry put the Tar Heels ahead, he missed a 3-point attempt from the top of the key, giving the Orange the ball with 32.6 seconds left.

UNC: With just two games left in the regular season, the Tar Heels are in the hunt for second place in the ACC. They entered the game a half-game behind second-place Duke, which played Louisville later Wednesday. An upcoming five-day break will give UNC a nice respite heading to the postseason. Carolina has 10 wins over current Quadrant I opponents, most in the country.

Syracuse: The Orange still have games against Boston College and two ranked teams - Duke and Clemson - as well as the ACC Tournament to bolster their resume for the postseason.

UNC used 10 players in the first half and seven scored as its bench held a 13-2 edge over the Orange's reserves. High scorers were Maye and Manley with 8 apiece, Pinson with 7, and Berry 6. As usual, Battle, Howard and Brissett played every minute of the period for the Orange.

UNC: The Tar Heels have five days off before they host Miami next Tuesday night.