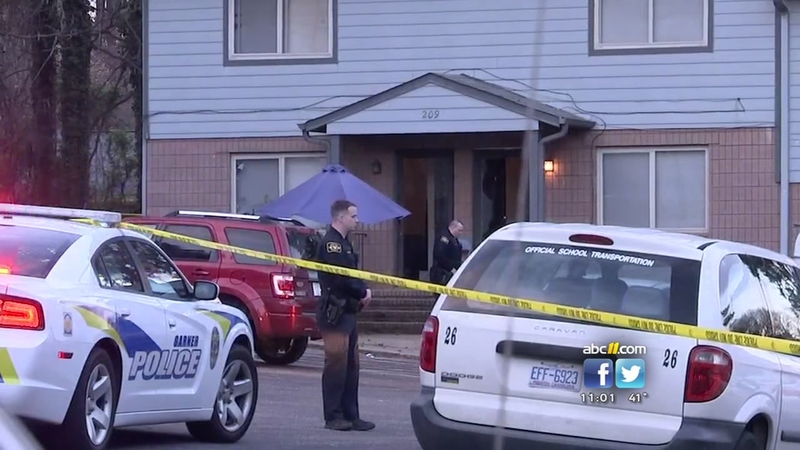 One dead, one injured in Garner shooting

The second person involved remains at WakeMed and is described as stable. His name has not yet been released.

"Scary, it's really scary," said Connie Benton who heard the gunshots on Johnson Street from her apartment on the opposite end of the parking lot. When the shots rang out about 6:20 p.m. she didn't want to believe it came from a gun.

Garner Police rope off crime tape at the scene of the shooting Tuesday.

Garner Police officers immediately honed in on an apartment unit in the 200 block of Johnson Street. The screen-door glass appeared to have been shattered in the gunfight.

"There's just a whole lot of information we don't know yet," said Garner Police Capt. Joe Binns. "We know there were multiple gunshots. We just don't know how many of those rounds actually struck our victim. Again, it's an active investigation. He's at WakeMed undergoing treatment."

But as officers interviewed witnesses, the story about what happened slowly shifted.

After originally reporting one man had been shot, police confirmed it was two. One man, a 27-year-old, was rushed to WakeMed by ambulance, where he later died. But the other arrived at the hospital by private vehicle - complicating the search for facts.

"Based on the information we have right now, we don't think there's a threat to anybody in this area," Capt. Binns said.

As the City-County Bureau of Identification moved in to analyze the crime scene on Johnson Street, questions about whether the men knew each other, who had a gun, and why they fired - remained unanswered.

That does not help Benton sleep any easier.

Garner shooting scene is directly across the street from North Garner Middle School — which had already dismissed for the day. #abc11 pic.twitter.com/FggzxqvN5d

"We don't know when it was or what was going on in there," she said. "And it's really scary."

The shooting happened across the street from North Garner Middle School, which had already dismissed students for the day.

Police would not say whether a suspect was in custody, but did say they did not believe there was any immediate danger to the public and were not searching for other suspects.