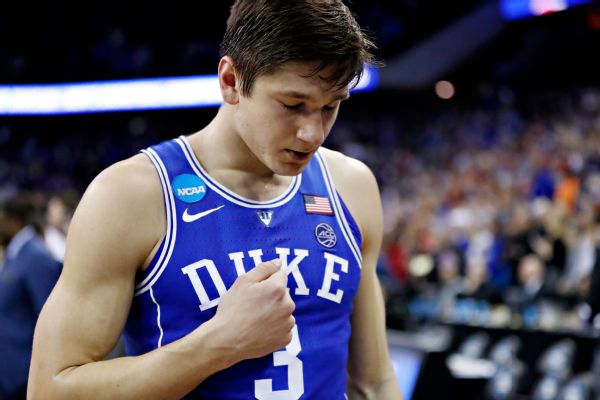 OMAHA, Neb. -- The Dukecareer of Grayson Allen, often unforgettable, came to an end Sunday night, as the senior guard missed a shot at the end of regulation against Kansasthat could have sent the Blue Devils to the Final Four.

Minutes later, after the Jayhawks' 85-81 victory in overtime, Allen sat wrought with emotion at his locker, staring ahead as he pondered the "abrupt" finish to his four years at the school that began with a national championship in 2015 and closed without another trip past the Elite Eight.

Allen finished with 13 points in his finale on 3-of-13 shooting to close his four seasons three points short of joining the 12-member, career 2,000-point club at Duke. His attempt at immortality, a jumper from just outside the lane with the score tied at 72, bounced off the glass and touched every inch of the rim before falling away with less than 1 second to play.

"I'm OK with it," Duke coach Mike Krzyzewski said. "I mean, it almost went in."

Allen won't be missed by many in college basketball, but he will be long remembered for the controversy that surrounded him. He was suspended by Krzyzewski in 2016 after he tripped a player from Elon, a repeat offense.

On Sunday, his coach chose to remember the high moments.

"He's a national champion," said Krzyzewski, denied on Sunday a 13th trip to the Final Four, which would have broken John Wooden's coaching record. "He's been our leader this year. He's one of the outstanding players to have ever played in our program."

Largely absent of controversy this season, Allen led a starting group at Duke over the past four months that consisted of him and four freshmen.

"Grayson was a big part of us getting this far," Bagley said. "We try to follow him. And it hurts that we couldn't get it done for him."

Allen agreed, primarily about the pain.

His four free throws in the final two minutes of regulation opened a three-point lead for Duke before Sviatoslav Mykhailiuk of Kansas drilled a 3 with 26 seconds left to tie it. Allen fought back tears while discussing his career in the aftermath of the overtime period as the Jayhawks celebrated ahead of preparing for a trip to San Antonio.

"I've learned so much in my four years here," Allen said, "coming out a completely different person and for the better. And the relationships I've built with [Krzyzewski], the coaches, some of my teammates who are guys I call my brothers now, those will last for a really long time.