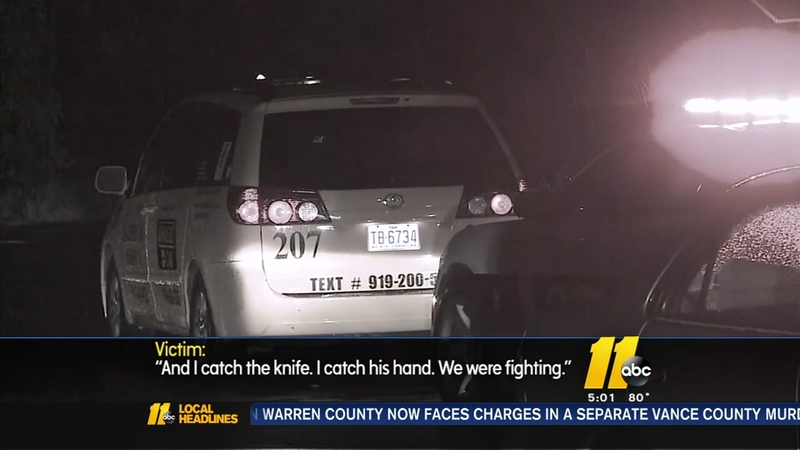 DURHAM, N.C. (WTVD) -- ABC11 has obtained the 911 call made by a Durham cab driver moments after he was stabbed on the job.

Now that cab driver is speaking exclusively to us.

The cab driver says he's still in the hospital, three days after being attacked by a customer who refused to pay him.

"He had a long knife. He cut me and I feel bad," the victim said.

The stabbing happened around 9 p.m. Sunday at the intersection of Cornwallis Road and Weaver Street.

Operator: Just don't disturb anything at the scene is there any serious bleeding?

Operator: Is it spurting or pouring out?

The 38-year-old stab victim received severe cuts to his hand and arm.

It's the second taxi cab attack Durham police are investigating from over the weekend.

The night before around 11, neighbors called 911 after seeing a cab driver slam into a utility pole.

The wreck happened a mile away on Burlington Avenue. The cab driver told police he crashed after being attacked with a knife by his passenger who took his cash.

The robber got away.

The victim was taken to the hospital with cuts he will survive.

Police working to determine if both crimes are connected.

ABC 11 asked the cab driver who called 911 if he will continue driving.

The description of the suspect is vague. Anyone who can help is asked to call Crimestoppers at 919-683-1200.