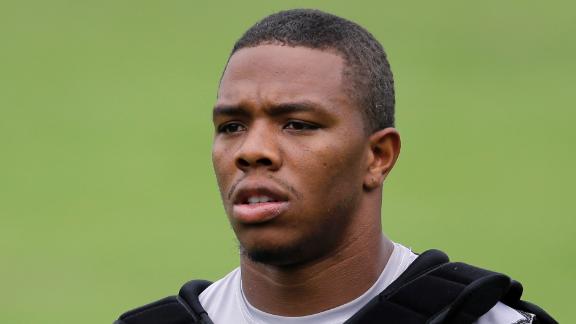 NEW YORK -- Most NFL fans believe commissioner Roger Goodell should keep his job after his handling of recent domestic violence cases, according to a new Associated Press-GfK Poll.

The same survey showed those fans also think Minnesota Vikings star Adrian Peterson should only be allowed to play again if he is found not guilty of felony child abuse.

Only 32 percent said Goodell should lose his job, with 66 percent saying he shouldn't.

Goodell initially suspended Ray Rice for two games after the Baltimore Ravens running back was charged with assaulting his then-fiancee. The commissioner defended the punishment at first before admitting more than a month later that he "didn't get it right."

When a video of the assault later surfaced, Goodell suspended Rice indefinitely, saying the images constituted new evidence. Rice was released earlier that day by the Ravens.

The poll shows strong support for keeping Rice off the field for at least some period of time. Forty-three percent of fans say Rice should never be allowed to play again. Just 7 percent say he should be able to play now, with 49 percent saying he should be permitted to return after missing more time.

Opinions differed by gender and race. Slightly more than half of women say Rice should never be allowed to play again, compared with 37 percent of men. Just 19 percent of black fans say he should receive a permanent ban, while 46 percent of white fans support that.

Respondents were more receptive to the idea of Peterson returning to the field. Peterson is currently on paid leave while he faces child abuse charges.

Answers to this question also varied by gender and race. Thirty-four percent of men say Peterson should be allowed to return under any circumstances, compared with 22 percent of women. And 45 percent of black fans say he should be able to return no matter the verdict, while only 25 percent of white fans say that.

The poll suggests that the recent spate of highly publicized domestic violence cases has made a small dent in the NFL's popularity. An AP-GfK Poll conducted in January found that 49 percent of respondents considered themselves fans of pro football. That number dropped to 43 percent in the current poll.

Of the group with less interest, 42 percent say the recent domestic violence arrests have been an extremely or very important factor in that drop.

NFL Details Attempts To Obtain Ray Rice Video
ESPN.com senior writer Don Van Natta Jr. breaks down the NFL's four attempts to obtain the video of Ray Rice and his then-fiancee, Janay Palmer, inside an elevator at the Revel casino.